The tragedy of the Bridge of Boats, 200 years later- Historic Centre of Porto (World Heritage) (*****)

The tragedy of the bridge of barges, that occurred in the Port 29 March 1809, was a particularly striking image. It is a picture of an unknown author made by someone who, while the terrified population fled to the French bayonets and cannons, allowed to stay, do not know how or why, and then painted what happened: Napoleon's troops to fire on the quay abriam the Bank; men, women and children fleeing; bodies that caíam input into waters. On this day, over 4000 thousand inhabitants of the city (1) died when the bridge, based on barges linking both banks of the Douro, collapsed, probably due to the weight.

This table where he had been placed after the bridge, and has become a popular site of pilgrimage. There were candles and left money for the shrines - the "Alminhas Bridge", now marked in Ribeira by Teixeira Lopes evocative board that continues to be a place of devotion (2). As for the frame, then painted Oil, was in the custody of the Chapel of Souls (ou das Taipas), in Cordage, who also happened to the management of the money left in Alminhas.
The disaster of the bridge of boats, that we celebrate this Sunday 200 years, marked the history and memory of portuenses. Several initiatives indicate the date.
No Sunday, and exposure to, opens a sculptural work of Souto Moura, which will have a part in Gaia and another in Port, near the spot where once the old bridge.
The bridge of boats was an engineering project of Carlos Amarante.
Consisted of twenty barges connected by steel cables and, na altura, was the only one allowed to cross the river. When the French troops of General Soult entered the city, population, panic, tried to escape to Gaia, but the bridge did not hold. It was later remade, but only in 1843 opened the new suspension bridge, which replaced.
Similar bridges - based on barges - have been used throughout history, due to its speed of construction, often to allow the passage of troops. The Porto was the first bridge of its kind built in Portugal as a longer-term solution, and could be opened to allow the passage of river traffic. Carlos Amarante was the author of other famous works of the northern region, as Bom Jesus (**) and the church Pópulo, Braga; Trinity Church, no Puerto; and the reconstruction of walls of Valencia (***).
27 March 2009-JN News 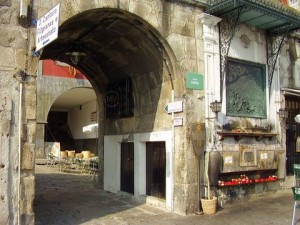 Installation in Ribeira, overlooking the river, remember is the Bridge of Boats
The architect Eduardo Souto Moura has designed an evocative monument to rest overlooking the River Douro.
As with the crossing 20 Carlos Amarante boats, also the sculpture of Porto architect depart from both shores. The symmetrical parts in iron eight meters in length shall f cast themselves-, Spiked Ground, towards the river without disturbing the river scenery. The minimalist design recalls the mooring pier of the bridge that collapsed on 29 March 1809, unable to bear the weight of hundreds of popular fleeing the French troops.
"It is a monument of evocative Bridge of Boats and, a bridge, has two banks and two symmetrical side interventions of Porto and Gaia ", stresses, JN, Souto Moura, the reading of the sculptural pieces. "It is an applied plaque on the pier which was folded to receive, eventually, the cables of a bridge ". A sculpture, Careful architect, may evoke, "Abstractly, the shape of the keel of a boat ".
The monument rises in the vicinity of where there were lashings of steel missing Bridge of Boats. In the design process, Souto Moura recalls that idealized a "prominent" installation, but the final design is more "sheltered" to safeguard shipping in the Douro. One concern was that the sculpture would affect the landscape.
Historical Reenactment of the French invasions
For May, 're booked another high point of the program: the historical reconstruction of the French invasions. The scene of the battle with 400 extras will be the Ribeira de Gaia. 'll Hear them guns on the night of 9 May. The following day, the symbolic transfer to the Port by the river and the Bridge of Luis I and new recreations next to the market square and cube Ferreira Borges occur.
JN News 14-3-2009
My notes:
(1) - At the right is unknown whether the number of victims in this tragedy happened.
(2)- The shrines of the bridge is a bas-relief in bronze made in 1897 Hair sculptor Teixeira Lopes, good, which is located not Pier Riverside, near the Ponte Dom Luis (***).

2 Comments The tragedy of the Bridge of Boats, 200 years later- Historic Centre of Porto (World Heritage) (*****)