A Church of Vimioso Mannerism is a temple, quite spacious, granite, built in the seventeenth century, during the Philippine. Its patron S. Vicente. Are usually averse the mannerist churches in Portugal, rare cases because pulling, are lacking in ornamentation, and that somehow compensate for the mathematical rigor of its geometry. So often have severe and ascetic aspect.
So the outside of the main facade, divided into three sections, and the side, one made by the bell tower and the other by the clock tower. The central body is the perfect portal arch in back. The body is reinforced by robust buttresses (five on each side). But forget the geometric spirit of seriousness and depart for your interior that is worth a visit for its spectacular dome and its chancel.
The church dome Vimioso
No inside, very high nature, is divided into five spans torais by arcs which are based on the giant that are visible on the outside, significantly slaughtered and far-reaching. Coverage is in barrel vault with cross ribs. Closures bearing various reasons, as the Sun and the Moon, rosetada cross, mascarons, dove of the Holy Spirit, Scallop shells, etc.. 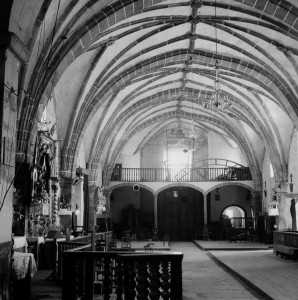 Also the chancel is monumental and gilded, following the same quality in this typology found in many churches of Bragança. Solomonic columns are – three on each side that culminate in scenographic Archivolts profusely ornamented leaves of vines, bunches of grapes, birds, repolhudinhos angels vindimando or reveling in the contemplation of the baroque atmosphere.
Impersonate Vimioso worth stopping in his parish church (unfortunately almost always closed) and observe this magnificent work of artistic architecture that is the dome of the church of Vimioso and its chancel.
Photo Credits-How we did better, removed the picture, very old, do forum Skyscrapercity of which I am part.
Thanks: The Remarkable been housed in Portugal Vileira (Vimioso) e visitou a church of Vimioso to call this magnificent hotel and restaurant that supports the turismo cultural.

Castelo de Vide and Marvão, Regions of Portugal, Distrito-Portalegre, All articles
22 from April to 201022 de May de 2010