The appropriate descriptive panel prepared by the local Natural Park of Douro International reads.
“A Lake of Santa Maria de Aguiar, in the county Figueira de Castelo Rodrigo, results from the construction of an earthen dam 1979, is located in the extreme south of the Douro International Natural Park, municipality of Figueira de Castelo Rodrigo. For public supply, this reservoir suffers little fluctuation in water levels, occurring installing patches of aquatic and riparian vegetation, and its surroundings there is an alternation of farmland, pastures, Lameiros and small forests maciços. This ecological conjecture together with the scarcity of other wetlands within, allowed this space holds high importance for waterfowl, especially the crested grebes that this area has one of the most important population centers nationally ".
The birds are drawn on the panel: White Stork, Garça-real, Cormorant-of-faces-white, Galeirão, Grebe Crest, Little Grebe and Mallard. 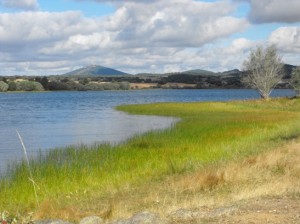 The dam is located in shore of Aguiar, formed in homogeneous earth with 20 meters in height and crowning of 667m in length.
The traveler confesses that he had always like panels, have more life easier in preparing these articles.
The noisy engine of my car away an entire array of birds that fluttered finórias, and I just lowered the real ducks. I waited some time and some birds returned to the beautiful Albufeira, but very off; raptors were soaring circuses and almost fell asleep – the lake is an ideal place, to observe birds, but also for a well deserved rest this adventurer unveiled. It is time to continue through the wonders of the beautiful county of Figueira de Castelo Rodrigo, looking very close to Sierra Marofa (*), a Historical Village of Castelo Rodrigo (**) or very close to Tower Almofala (*) What is a Roman temple.
Photo Credits. The photograph was courtesy e.gabriel