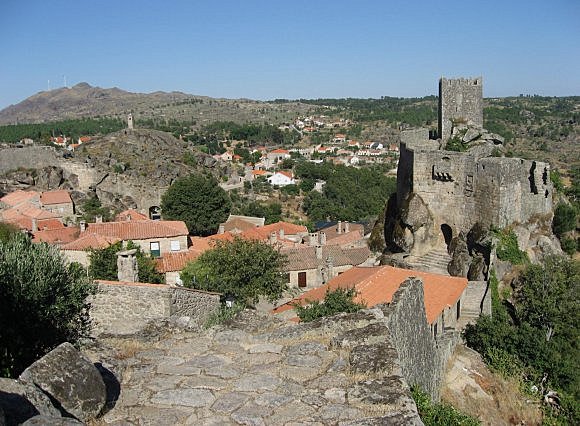 A 760 meters of altitude, Sortelha It is one of the most beautiful villages of Portugal Having overcome the Port Vila, that the people called entry, travel in time and we are reflecting in a small village of Medieval. Sortelha It is arguably one of Most Beautiful Villages of Portugal. Granite builds almost all its buildings: housing, churches, castle, about defense, passing through the narrow cobbled streets, torn here and there on the rock, in permanent gap. The whole village is surrounded by an enduring medieval wall (thirteenth century) and urban fabric beautifully fits the irregularity and inclination of relief.

In the seventeenth century Manueline and time were still some changes, Sortelha but it had lost its strategic and military importance and the town crystallized in time.

Origin of place names- Sortelha, It is a giant stone ring?

Known whether the origin of the toponym, there is controversy surrounding the following events – select the reader that most pleases. Sortilia is the name already present in the charter of 1298 given the King Sancho II

First: the name derives from a ring, Sortija or Sortela.

This ring could be used in a medieval chivalric game, in which the knights tried to shove his spear. According to Viterbo, linguist, sortel is a ring of stones with special powers used by witches and wizards. Third: The fortified urban agglomeration has oval stroke, in other words, an almost circular ring.

For us Sortelha, has a place name, approaching spell but it is fortunate there as well as beautiful village.

A source Sortelha is dubious and is lost in the abyss of time. Curious are the intriguing fossetes, probably of anthropogenic origin, the towering stone that supports the belfry. They will be in all about two dozen dimpled, with an average diameter of 16 cm and spread over two cores. Monsanto found a set of thirteen similar dimples.

We have three explanations for these dimples:

1- be natural, who have the suggestive name of sinks in granite geomorphology.

2-Sinks which serve to grind grain and stores them temporarily.

3- Sinks to pagan religious acts in pre-Christian religions. Also the Head of Old, beautiful cyclopean monolith and "Kiss stones" may be spaces litolátricos.

In the parish are several traces of the Bronze age and the Iron and Roman Materials. The most famous piece is the Roman altar dedicated to a deity-Vordio Talaconio, teónimo of Sortelha, consecrated by a M(bow) C(ORNELIUS) The(?) ou M(bow) C(aecilius) The(ptatus) (Osorio, 1999) discovered in the wall of the Church of Our Lady of the Snows. In 1181 King Sancho I, settled in space and 1228, his grandson, Dom Sancho II, gives you the first charter which is reconfirmed by King Farmer, but his most important work was the castle. Sancho II promotes the construction of Castle Sortelha, essential not only for the defense of the Village, but above all to defend the frontier with Castile, that situava the river Coa.

With the signing of the treaty in Alcanices 1297, passed to the Portuguese rule the castles of Sabugal, Vilar Maior, Tailors, Castelo Rodrigo, Castelo Bom, Almeida and the town of San Felice of Gallegos - in the area of ​​Riba Coa - plus Olivenza, Ouguela and Campo Maior. 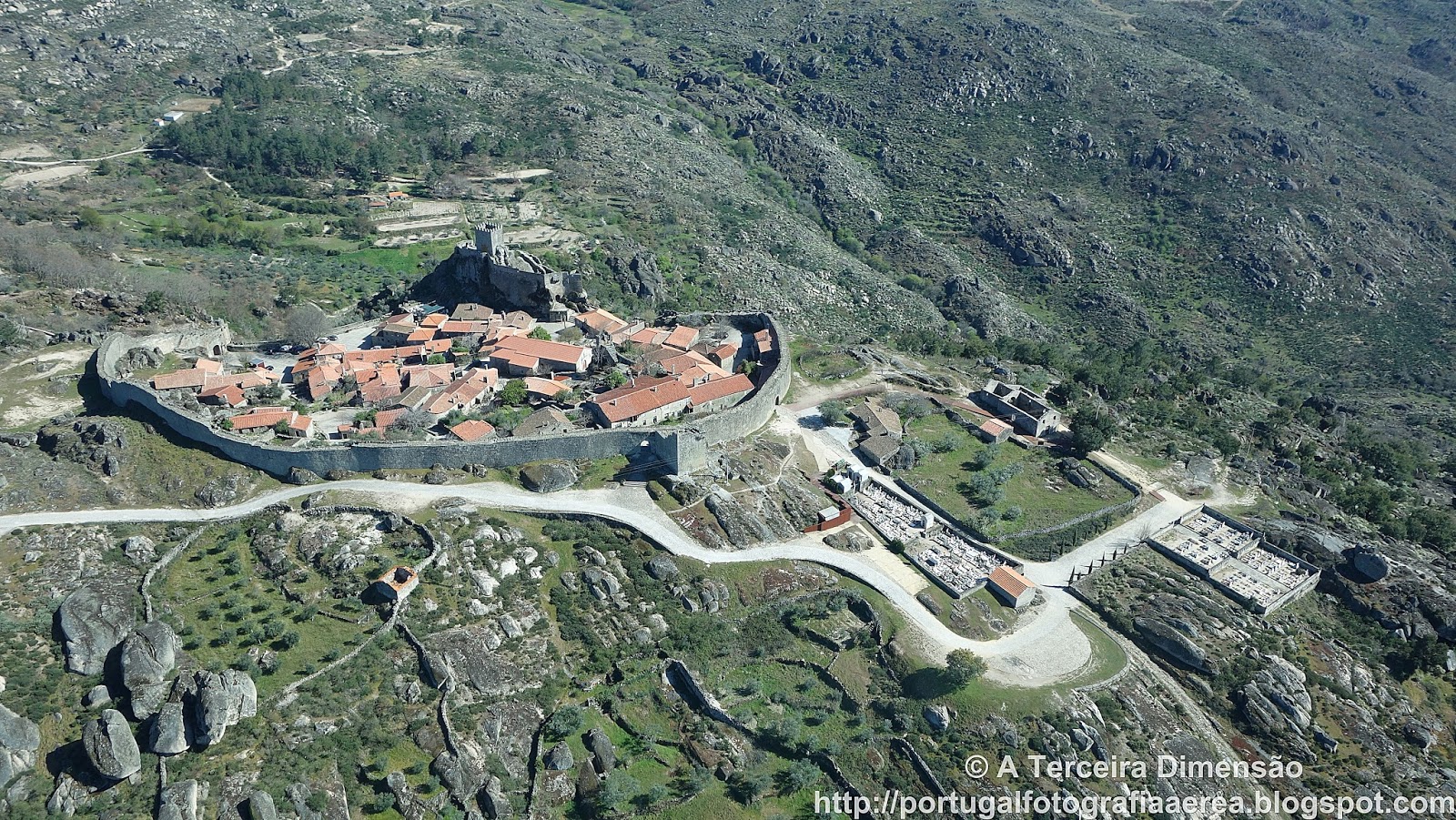 O rei D. Dinis, according to established in treated, give up ownership of Ayamonte, Esparregal, Valencia and Aracena. The Spanish internal situation (namely the deep differences of tutors Castilian king) reflected in this treatise, as well as the strategic vision of the Portuguese monarch. King Dinis gift then promotes the reconstruction of the castle and the construction of the wall surrounding the town.

Sortelha then loses some of its strategic importance as it happens to be 50 km the new frontier. It is in time of King Manuel I is renewed charter letter and benefited Castle, is built pillory, the former home of the House which existed on the ground floor a prison.

Dom João III, elevates the medieval village of the county in favor of Luis Silveira, Guard chief of the King and the county is extinct in 1617 even in the reign of this king. The influential Luís da Silveira disgraced retires to the village of Gois. The most important monuments of Gois had their patronage, a bela ponte, the chapel of the Castle (Chapel of Our Lady of the Assumption) and the sixteenth-century remodeling of the parish church; is this that lies in your body a remarkable renaissance tomb (*), maybe till the genius of Filipe Hodarte, though without the proto-Baroque genius of genius Last Supper, exposed the Machado de Castro Museum, Coimbra. The first Earl of Sortelha, Luís da Silveira was chief guard of king John III, but also poet of General Songbook.

Also in the time of King Dom João III, gives the transfer and construction intramural church array, under the invocation of Our Lady of the Snows replacing old parish church of St. John, extramural situated. 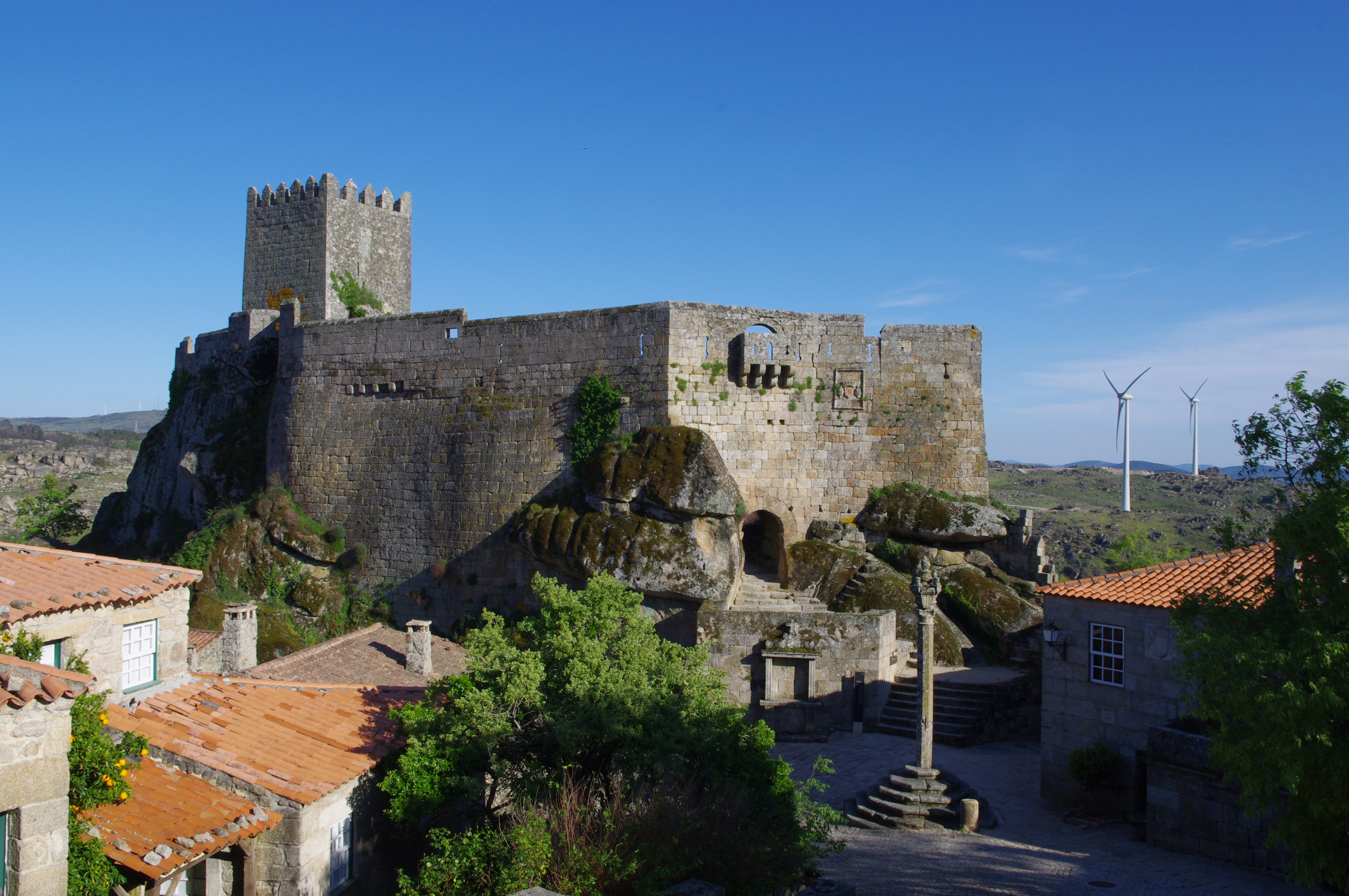 The wall and the castle returned to be rebuilt during the War of Restoration. With the passage of Napoleon's troops, of them collapsed in following some skirmishes fought here.

In 1855 The county was abolished, going to vila do Sabugal.

In 1910 Your castle is considered a National Monument. In 1994, after almost forgotten and dying, was considered Historical Village and then recovered under that program.

When in Portugal, want to reference one of the paradigms of medieval fortified village, immediately in the raging Sortelha. It may have been the return of her Castle, which grew the town that was protected with a fence and some towers, in some cases, protect entrances flanking the.

Installed on a magnificent hilltop granite, It was built by Sancho I, at the beginning of the thirteenth century as a strategic response to the establishment by Alfonso XI Lion miliary a defensive structure in Sabugal, the right margin of Coa. It is one of the purest Portuguese Romanesque castles.

Accesses the inside enclosure through a heavily guarded gate by a beautiful desk boulders (Balcony Pilate or the Judge, the popular name), where he launched what was possible for burglars, including vertical shooting candles. It was also adapted to the use of firearms, as troneiras. No inside, this typical rocker Castle everything is medieval didacticism: a pura Cisterna, the inaccessible castle keep isolated from the ramparts, with high input, the arrow slits, a porta false, afeiçoamento the walls of the cyclopean Baroque ... Only in the next century is built around the village, with residents to alijarem inside her.

The main axis is the street of the Source, that starts off in the Curro (where did bullfighting stick) and then take the street Right, unites the East Gate to New Port facing the Serra da Estrela.

Wide of Curro is a wide beautiful, with its huge Lodao. It is acceded to him by the Port Vila, with broken arch and bevelled edges. Highlighting the remarkable set of stones sigladas. Around is a very beautiful housing scheme.

Contrary to what the name implies, the 3 doors, this is the oldest. Has recorded in two ancient ombreia measures applying on the markets and fairs: the cubit (66cm) ea be (110cm). It was in the vicinity of this door that stemmed medieval market as is attested by the various artificial basins built for commercial usefulness and which follows a well-preserved medieval sidewalk. Outside of this entry distend up traces of ancient monuments dismantled (Church of St. John of the Cross, Mercy Hospital). Other properties of value are: the pillory with armillary sphere, the Town Hall and the parish church (with ceiling Mudejar) underpinning populated with small squares along the axial street said. The landscape then it is a moving dazzle: granitic, jungle, rude…distante. A Beauty Sortelha is much, in their single and granite buildings, in his little castle, esbelto and incorrompido, the myriad of details to the senses and comprehensive view of exciting ways. The Historical Village of Portugal is a stimulus to contemplation and meditation. 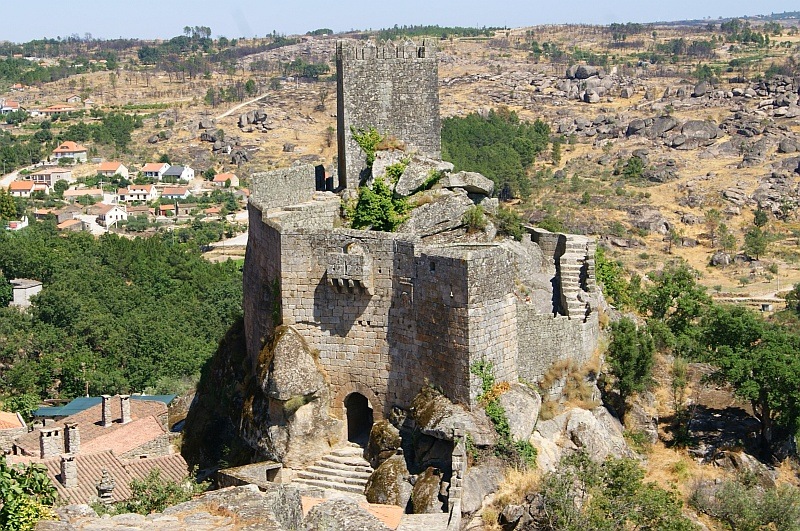 Text Júlio Gil, from the book "The Most Beautiful Towns and Villages of Portugal"Word-Editorial

"Around the granite stone dominates the landscape, giving rise to some limited patches of rye and small groves tight for baroque. Wool down the, the green glen. On a vertical cliff, domineering, romantic, the castle. Here there are no big houses- even emblazoned are of modest size and touching simplicity, perfectly integrated into a set of exceptional decorative value due to the undeniable value of these people. At each time point are grounds for grace and spirit - a door, a small staircase, a coat of arms, an altar, Pelourinho ... From the square we enter directly into the castle, a sequence identity of not allowing be understood to those who inspired, harmonic integration of such forms.

On the edge of Pelourinho- with a bow at the helm, perhaps associated with the toponym Sortelha, would mean "ring"-stands a bell on the eaves of the Parish, Old House Chamber, Delicious and sober architecture of reduced dimensions, ledge paved the entrance porch, semienterradas stores, fine glass in the sash windows. Dominates the wide lovely for which also turns another old facade of a similar character. The architectural austerity of the mother church contrasts with its precious and more Mudejar ceiling with baroque decorativism the altar. If everything in the town is remarkably sober and severe, By adding even more sobriety and severities of this siege mulltiformes cliffs - where not missing profiles that stimulate IDs, whims granite -, it is also paradoxically suit, welcoming, lyrical ".1 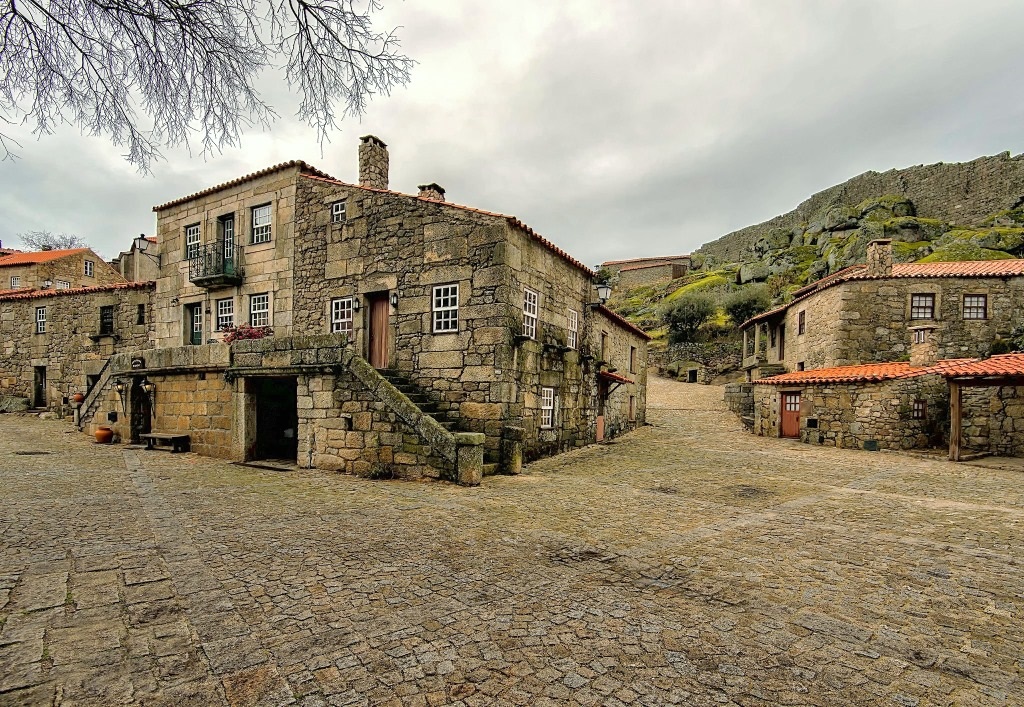 Text by José Saramago- Journey to Portugal – Editorial Path, 1981 "De Belmonte (**) will the traveler Sortelha on roads that are not good and landscapes that are surprising. Sign in Sortelha is entering the Middle Ages, and when this is not the traveler declares that sense you would say the same viewing, for example, Church of Belmonte (2), donde vem. What gives medieval character to this cluster is the enormity of the muralhas rodeiam. The thickness of these, and also the hardness of the pavement, as ruas íngremes, and, perched on gigantic rocks, the citadel, besieged last refuge, ultimate and perhaps futile hope. If someone won the cyclopean walls outside, No, it was rendered by this little castle that seems to play ". 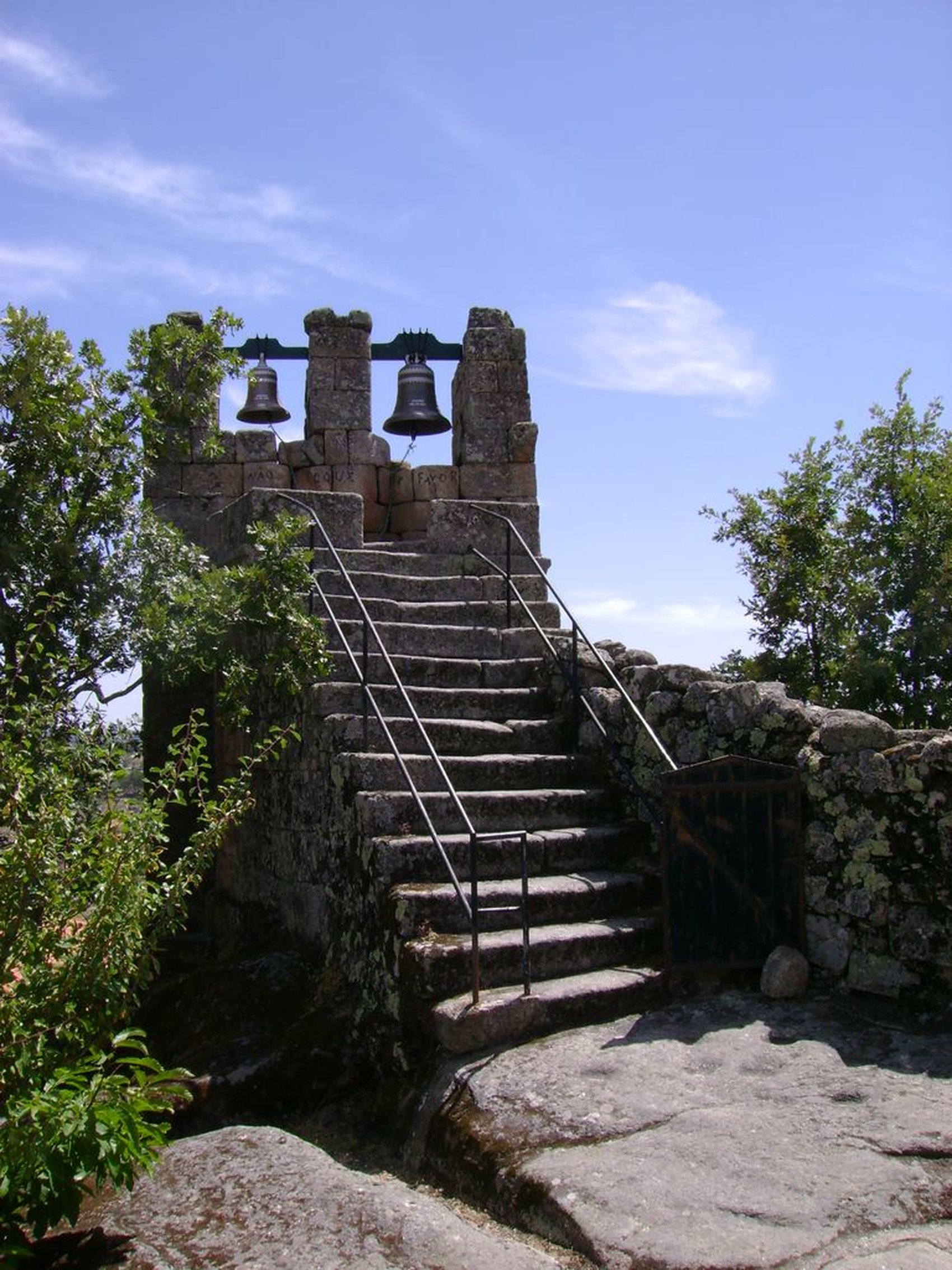 Text by Alexandre Herculano-Pointing Travel, 28 August 1853- Circle of Readers. "Visit the town contained within the fence. Sidewalk that rises between her suburb: Right massive rocks overlapping each other; cliffs to the left for a very deep Valeiro, one enters the door of the fence: On the left is the castle built on rock peaks: enclosure is a small oblong shape: the villa sits in an amphitheater to the right height above the castle: the wall that surrounds it is turreted and comes to grip with the castle: the aggregate of each overlapping the other rocky places in which it is based is similar to a sugar loaf: boulders have more than three fathoms high. Above the door a counter with a hole to release flammable materials, etc.. We stayed in the suburb: The night took notes. In a door jamb of the measure around the rod and cubit ".

1- Unfortunately the church is closed to the public. Of the several times I was in Sortelha I never had occasion to visit the interior of the temple.

2- Refers to the Church of Santiago, pantheon Cabrais (**) Image credit: The photos were kindly provided by excellent photography site: matarbustosfotografias.