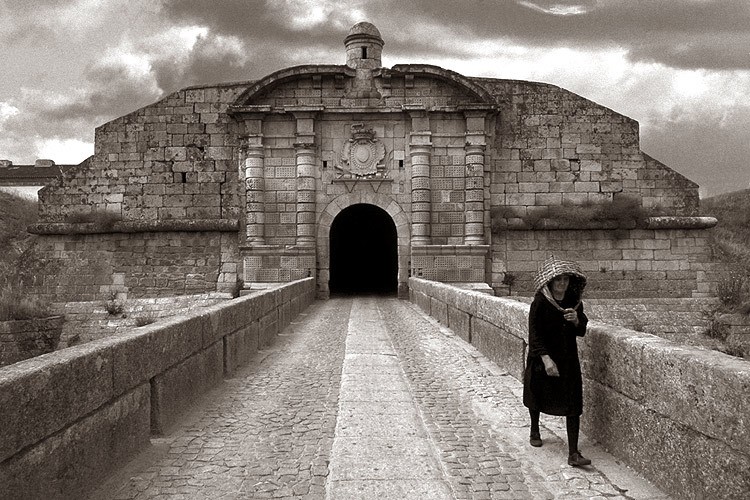 Did you know that ... Almeida Fortress is a lesson in the baroque military architecture stone is also an immense historical evocation of space and one of 12 historic villages of Portugal?
This fort is one of the most monumental squares of bulwark weapons. Other notable strongholds of Portugal, the same type are: Valenca do Minho (**) and Elvas (***), the latter World Heritage Site.
Indico only some impressive numbers, not to cease their desire to come here and witness one of the most poignant and best preserved military relics of the Iberian Peninsula. The depth of the pit reaches twelve meters with a minimum width of 10 m, and maximum 62 m. The total area of ​​the square is 650000 square meters and its perimeter is 2500 m.
The fortress of Almeida is a magnificent baroque masterpiece of Military Engineering
The strong-square Almeida in view area is a monumental star with twelve cuts (six-six bastions ravelins), not very symmetrical.
As in every street type Vauban, the polygon is geometrically cut into recesses and sharp angular projections, who obeyed the established principles of cross threading and tactics of shooting the seventeenth and eighteenth century. The slope of land based on rigged granite walls, mild slope. 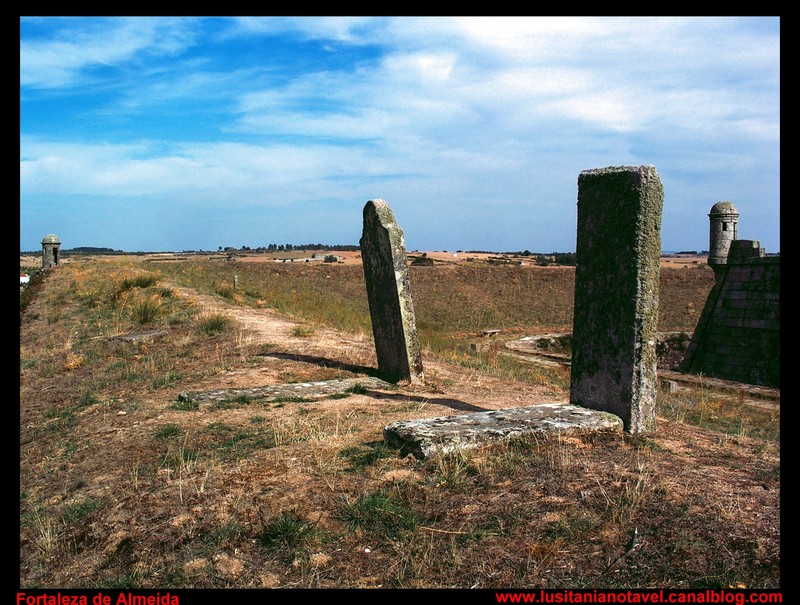 Every angle of the polygon refers to the outer, I shaped Lancer, the bulwark and Almeida are 6: St. Peter, Flag, the Train, of Santa Barbara, of St. John of God and St. Francis. In the face of the curtains and between each pair of ramparts, stand as small island forts, accessible by the gap, the ravelins (da Cruz, Good Brecha, of St. Anthony, the Storeroom, Doble and Loves).
Access to the Plaza it is, for duas take duplas (St. Francis and St. Anthony), placed in ravelins, open tunnel, with bomb-proof vaults and bearing the royal arms. Despite a castrense austerity are not without beauty.
The delicate gap between the lawns and bastions ravelins, small herds graze and play the young boys of the village. All around the indefinite plateau, the north is the quartz wall of Marofa (*). It is a quiet and rich landscape of charms, especially in spring, when the crops curl. That serene green expanse, contrasts with the cruel past battles that ravaged Almeida.
A little history of Almeida
The hill Almeida will probably have been a Romanized town protohistorical constant occupation to the present day.
The Arab village was called Talmeyda, which meant officers, expressing well the topography of your deployment, in constaste with towering Marofa, at the bottom, that that language meant "guide".
Doomed to suffer wars, passed several times Saracen Christian hand, and vice-versa. And even in the hands of the Christians continued compitas, desta time between Leon and Portuguese. The inevitable Dinis secured its final possession in 1297 Alcanices treated hair.
Dom Manuel I ordered new extensions and remodeling of the fortress castle manufacture, devastated by an explosion in 1810. The archaeological excavations, have highlighted its ruins, with its huge gap. The castle was gorgeous, as can be seen by Duarte drawings of weapons and was involved in its renovation the brilliant architect of the Monastery of Batalha (*****), Mateus Fernandes.
But it was from the Restoration War that the square was being (re) built until the late eighteenth century. 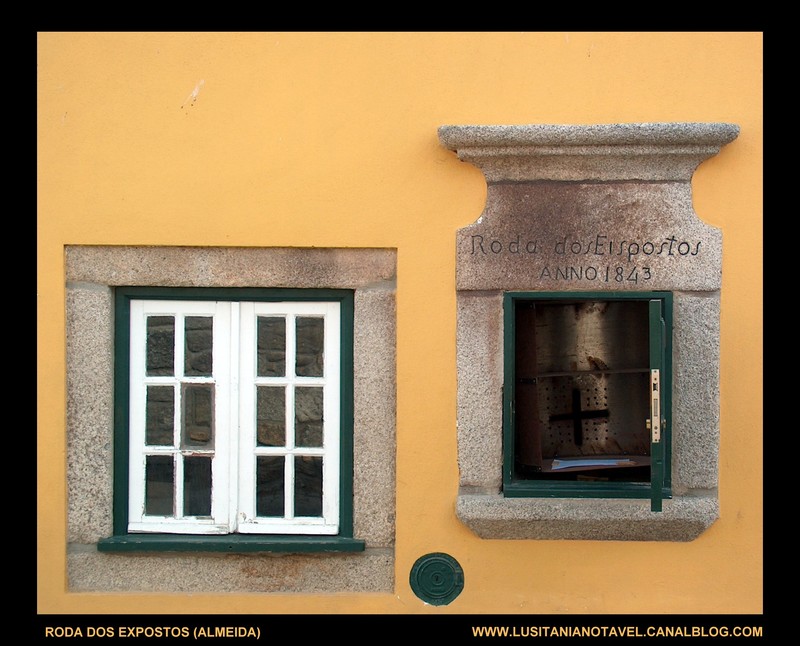 The current structure dates back to the seventeenth century, no contexto da Independence Restoration, when, revalued its strategic position, It has been transformed into a powerful square strong. Initiated in 1641 by the Governor of Weapons of Beira Province, its monumental works were only completed in the late eighteenth century with the Conde de Lippe.

Key structure during repeated succession conflicts in the eighteenth century, in the context of the Peninsular War was delivered by government order the Napoleonic army under the command of General Junot em fins de 1807. Returned to the domain Portugal, It was again surrounded by French troops, now under the command of GeneralAndre Massena (August 1810). A few months later, suffer new site, Now for troops English. Cornered, French defenders managed to retire, exploding the square behind him.

Who wants to know a fortress square, everything here is almost intact: Presidia, revelins, ditches, monumental walls, field hospital, canhoerias, platforms, flanks bastion, vaulted tunnels, Bomb-proof doors, barracks, lockers, deposits, forgings, offices, casemates, buildings-Staff…
A terrible explosion at the Almeida 26 August 1810
Was constant participation of the Plaza de Almeida-Forte, in the campaigns of the seventeenth century Restoration and the Napoleonic wars.
Here's a little story as an example. Massena wanted to start the 4th French invasion with prestigious victory and came assault Almeida. And laid siege on the morning of 26 August 1810 opened fire. Ao fim da tarde, two projectiles fell in the Old Castle on powder left on the floor, which served as a fuse. A terrible explosion leveled part of the village, the parish church and the medieval castle and killed about 500 people and opened several holes in the wall. Still would continue the resistance until the afternoon of the following day, but finally the square capitulated.

A few months later, suffer new site, agora by British troops. Cornered, French defenders managed to retire, exploding the square behind him.
In the nineteenth century, during the period of liberal rity (1832-1834), once again the town is the scene of clashes over ownership of this square. This journeyed between absolutists and liberals, serving Casemates prison for 1500 political prisoners. Only in 1927 the fortress has definitively have military functions.
Now no longer hear the drums rufares, Stop marching rhythms, fey screams or the roar of the cannons, but the ramparts de Almeida are still a bastion of our nationality, which should remind us greatly towards what we can not lose – proud to be Portuguese…And "Soul to Almeida".
Almeida is one of the twelve historical villages of Portugal and intends to apply for World Heritage, a cross-border application together with other squares Vauban-type fort. The candidacy symbolizes the recent fraternity among peoples and Dois would acrescer the tourist flow.
Jobs Historical Villages of Portugal (central region) World Heritage
Another possibility that occurs to me, will apply throughout the whole of the twelve Historical Village Beiras, including Almeida, the UNESCO World Heritage Site, and relate them to one of the oldest borders between nations of mankind. It would be a huge asset to the entire interior of Portugal; the application would have to force a whole nation. Tourism is one of the lifelines of all this beautiful region.

The Village of Adams
The assembly inserted into the fortification system, is a well defined open and orderly and even regular structure of straight and broad streets. It is a vast harmonic set of nineteenth century buildings with castrense influence, in its rigid geometry of forms and has been very well restored under the program of Historic Villages. Among the intramural buildings highlight: Squadrons of the Barracks, the foundations of the old castle manufacture, The Pousada, a Casa da Roda, El'Rei the riding school and the buildings of the Town Hall (Old Artillery Barracks). In the casemates recently opened a Historical and Military Museum.

A literature Almeida
Among the many novels related Almeida advise two: Lillian Fraser helium Belt (Fiction Prize Pen Club). Note that this author has gained in 2015 the Pessoa Prize. As aventuras de Sharpe no quinto volume, “SHARPE E O OURO. The Destruction of Almeida.1810 ", They are a good light literature of fun on the novel by Bernard Cornwell.

Before ending, I mean readers who already have chosen my place to meditate in Almeida, and in my notebook Traveller, I took some notes that will be useful to me in these humble "inputs".
It is the bastion of Santa Barbara, Also known as Alta Plaza; small paved platform of a battery with some shade trees that make me. I hear some birds, spring is near. I meditate on the human condition and dialogue with the late John Beresford in the Napoleonic battles 1812.
– How do you explain lieutenant expensive, that all military architecture, exercises about me, the most peaceful and pacifist citizen, so strange fascination?
You answer me through Lord Byron, your fellow- "After the suffering and horror, which resulted in my death, Beauty reborn and involved us ".
Photo Credits: Special thanks to my friend Jose Luis Mendes for having given me the picture in black and white.

Here you can read about Almeida siege 1810.

-Here you can read about the siege Almeida 1811.