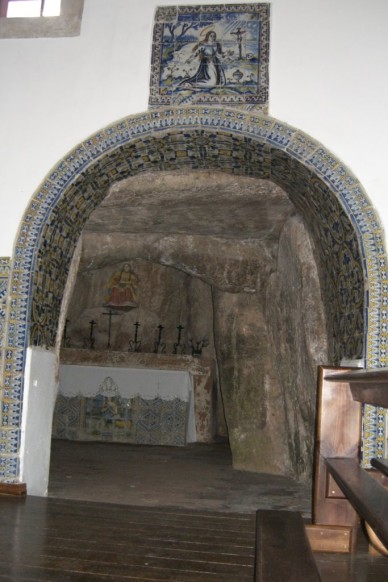 Did you know that the ... Anta of Alcobertas It is one of the most important megalithic monuments in the Iberian Peninsula?
The human being since it is known to you requires the existence of the sacred and created spaces for their union with their deities. These are places of knowledge (or forgetfulness), hope in solving our problems inevitable, Renaissance (want in life, or death), connection to missing loved ones, order of votes to the gods and moral and ethical organization (individual and collective). 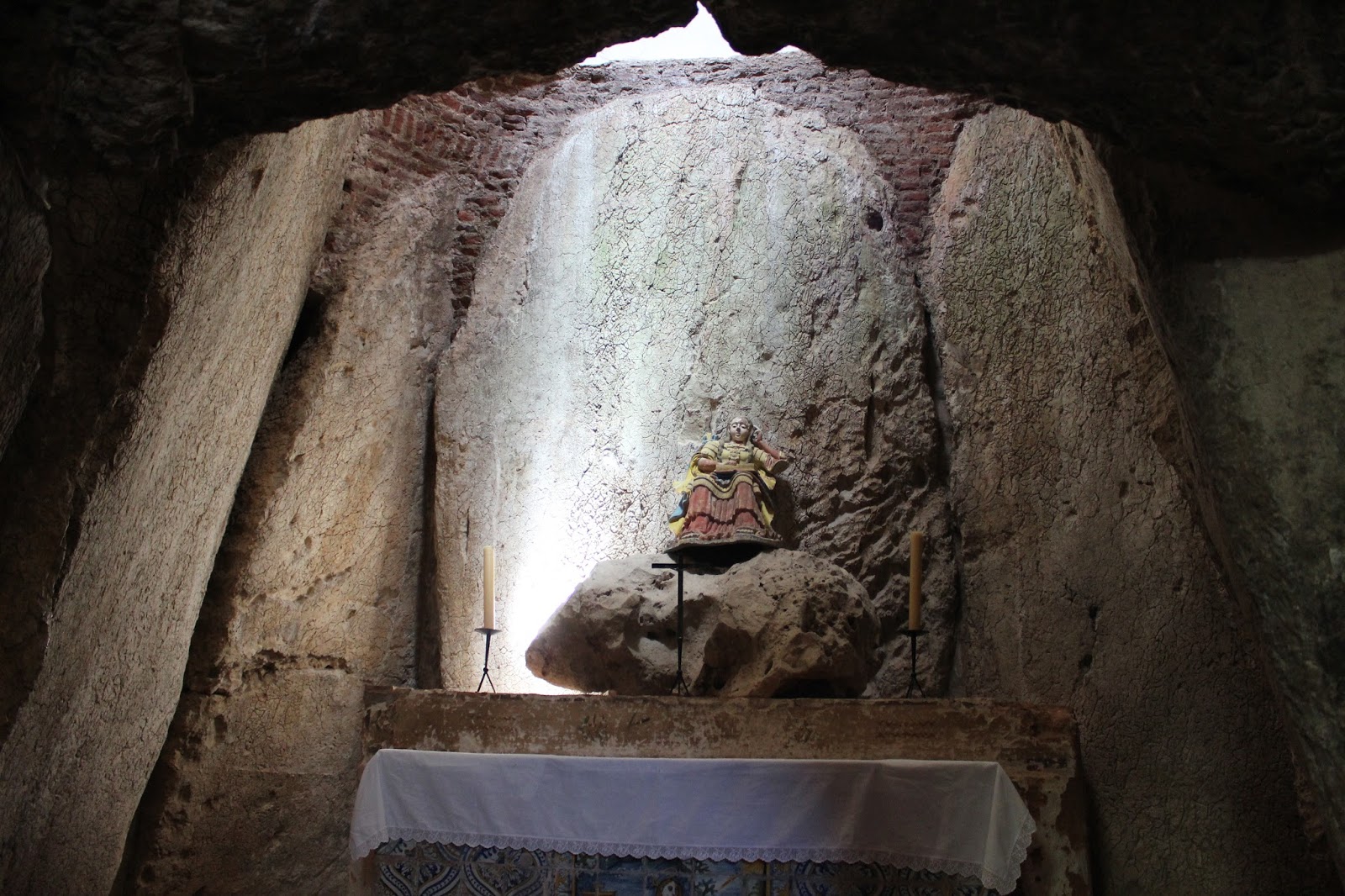 Tapirs were all this, built in the Neolithic, apart from collecting the deceased loved ones, also were these sacred spaces of union with Gods, They are completely inaccessible in the XXI century.
Some movements of Christianity, for example, led by the "Swabian" are Martin of Braga, razed and replaced these pagan places Christianizing them. However it was found convenient to, In some cases, the old structures to adapt to the new cult. This is the case of tapirs chapels.
In Portugal it is known 19 tapirs-contiguous chapels and chapels, such as the Anta-chapel of Senhora do Monte (Penedono) (**), the tapir are Brissos or Anta Pavia. One of the most spectacular cases is anta-chapel of Alcobertas (Rio Maior). 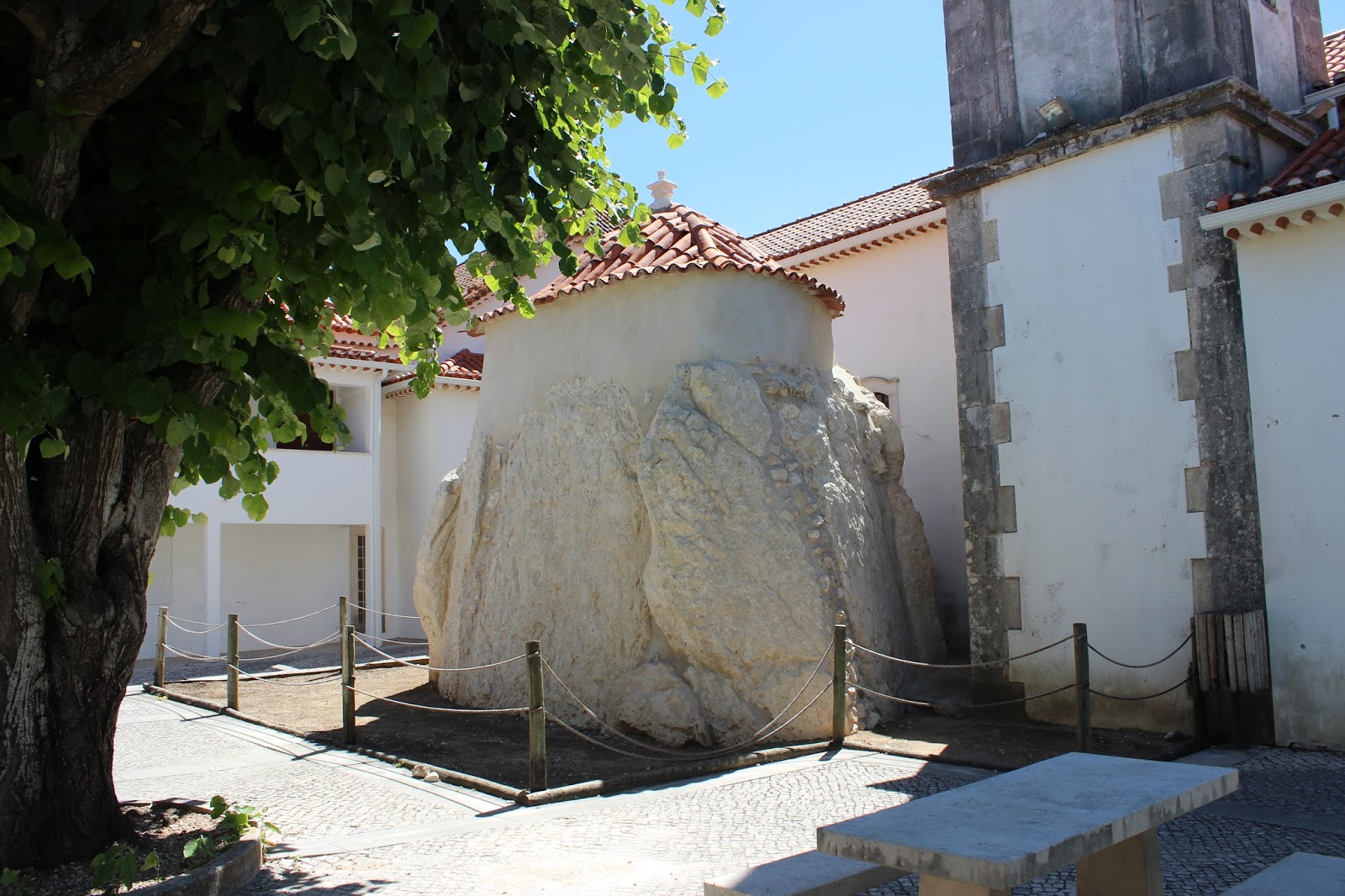 Mainstays of Anta Chapel of Alcobertas 1

You can read here:

Anta are Brissos (*) (Montemor New)
The Anta of Alcobertas, too rare to be in limestone, is one of the largest in the Iberian Peninsula. Date of the end of the Late Neolithic (4000 a 3500 a. C.). The dolmen was born a chapel in the sixteenth century and was later reformulated in the following centuries to the present parish church, keeping up as the dolmen side chapel.
Perpetuation of strange legend of Mary Magdalene in the Anta Alcobertas
The temple is on two legends with the role to be given to St. Mary Magdalene. The first tells us that it was Mary Magdalene who gave birth and grow the mainstays of tapir forming.

The other tells us that for the people feel that there is worshiped pagan gods tried to destroy the tapir by also be inopportune in Catholic church, however Mary Magdalene, with miraculous powers and divine intercession, reconstruction of anta, and often was dismantled, same times and reassembled by Santa. The people gave up and it was decided to build the church, preserving the monument.

Legend plasma so pagan ancestor worship remain, from fundura times, which is later replaced by Catholic worship, but in this case the St. Mary Magdalene would be the savior of the monument.

The Dolmen-Chapel of St. Mary Magdalene and Alcobertas
One enters the church and in the vulgar side of the gospel, we see a seventeenth-century arch that gives access to the corridor and inside the great tapir ... and it's as if we entered a mysterious limestone cave. Incredible! It is an impressive monument, playing background who visit. When I was here in March 2009, a master Croatian, which came with me melted into tears.
A anta, which is the chapel of St. Mary Magdalen, consists of the corridor left two pillars and a roof slab and a polygonal chamber with seven struts about 5 meters.

in Luke 8:2, mention is made, for the first time, of “Maria, called Magdalene, of whom went seven demons”. There is no biblical foundation to consider it as the mournful prostitute of sins that Christ asked for forgiveness. 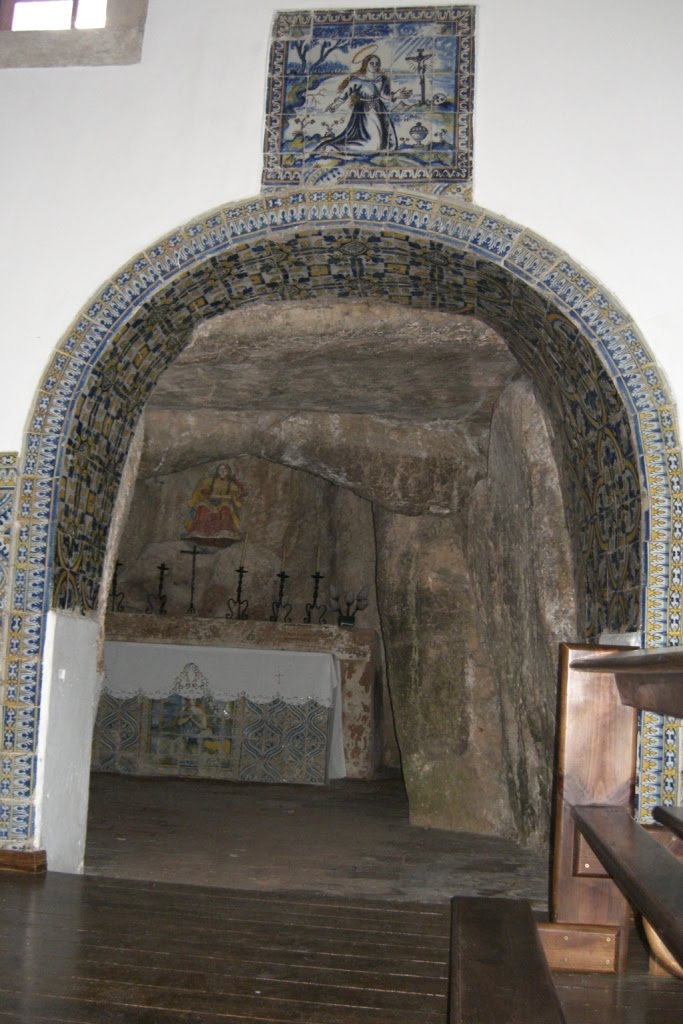 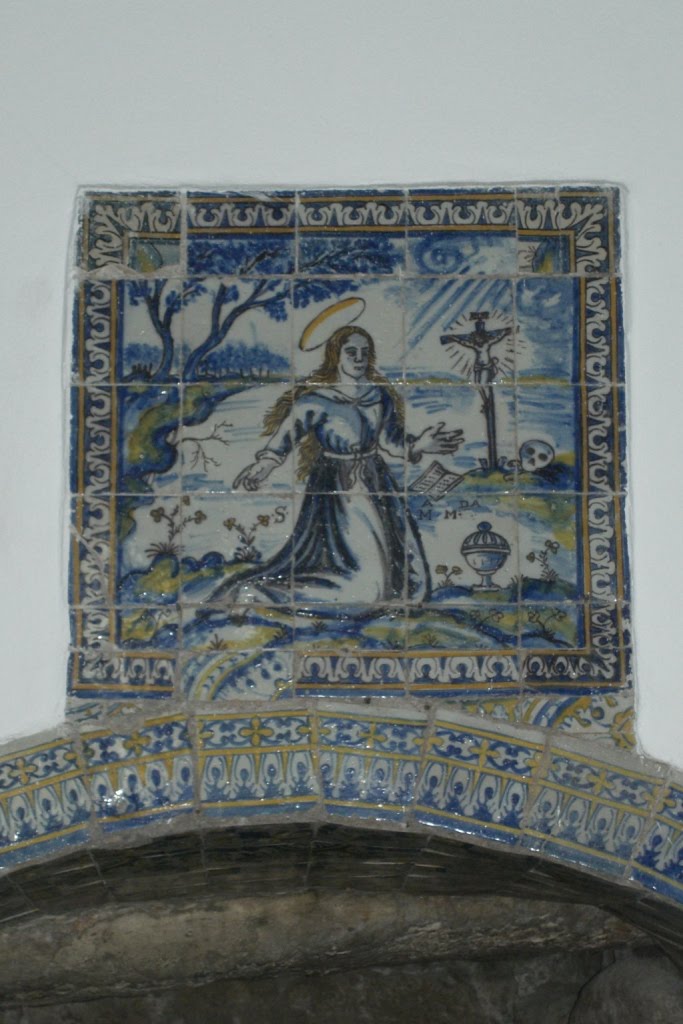 The props are full of intriguing fossetes (magical dimples). The slab of the roof of the chamber of the tapir was replaced by a simple roof.
There are three representations of St. Mary Magdalene present there: a tile panel over the entrance arch (the holy pray at the feet of Christ), a tile panel in front of the altar with the figuration of Mary Magdalene through denuded (while iniquitous) and in front of the niche of the church. There is a sixteenth-century polychrome sculpture of clay with a book on her lap, which is probably the Santa Ana.
Through trackless paths, but stemming from a permanent and long tradition, tapir was Christianized by invoking a saint "sinner" and then "sorry". The holy well be an avatar of Mother Goddess?
What are Dimples (fossetes, cazoletes)?
Are rather a puzzle and one of the most common reasons for all call prehistoric art. There aplenty, small circular depressions are present in tapirs, sacralized boulders and menhirs. There are also naturally in granite erosion caused by them tafoni. Sometimes it is not easy to distinguish natural from artificial.
What is the function of artificial dimples? There may be several explanations, and some can be cumulative:
a) They were receptacles for ritual libations on the rocks- here would be able to use human or animal blood, which would explain the small gullies that unite each other, but remember that the gullies are almost always, a usual natural erosive phenomenon, located in the struts and emus standing stones could be used as containers before the stones are alteadas.
b) Could be used for ritual after the uplift of the stones of megalithic monuments.
c) Be the result of obtaining the crushed stone monuments as is, for ritual purposes, medicinal (this practice is still carried out).
d) Could be part, In some cases, symbolic drawings, megalithic art.
and) They were signs of the passage of time.
f) Constituted representations of celestial objects, seeking to replicate its provision in the sky as part of celestial maps. The circle itself could symbolize the cosmic Sky, in your relationship with the gods and with Men. The deity lurking in stone, hair circle, its inception, whose life produces and controls.
g) The circle is also one of the ancient symbols of assured protection in their limits and still has this meaning. It has been fear of defeat, enemies, the return of the wandering souls, the demons, ourselves ... Come in the Iliad, Homer, Bronze Age and agree read the magnificent translation of Frederick Lawrence, that fighters draw a circle around the body before fight. Will this act of protection an embodiment of the rock?
All these explanations may be incorrect, and those explanations could have one or more than one cumulatively. The truth is that the fossetes, You had to have itself, worship litolátrico, They are one of the greatest enigmas of world archeology.

Today is normal in people people envision when the fossetes afagarem them in a strange rite, mixture of sensuality, energy harvesting, placebo phase.

More important than the creeds, beliefs and cults, this space what really matters is the connection, a clear recovery and simultaneously sublime, the deeper meaning of the very word 'religion' - Religare - which here takes on a peculiar intensity:

-reconnects to utilitarian life, paltry, with the sublimation of transcendence;

-the underworld, the certainty of the soil and the lightness of the air;

-a pagan cult of Christianity;

But it is the continuity, which transmits its visitors a sense of deep spiritual comfort, that makes up almost umbilical connection that gives body to the maximum of Jesus and Mary Magdalene carries as stigma throughout their Earth life and endures as memory tinge over time: to that we are all brothers and that this deeply avant-garde scientific message, is still taking its first steps.

Mix of deep mystery and dream dream, tapir-chapel of Alcobertas, a National Monument, It is one of the most eloquent monuments of Portugal.

Go the reader of the tapir Alcobertas and I bet not forgotten the site until the last day of his life.
Boa Viagem! 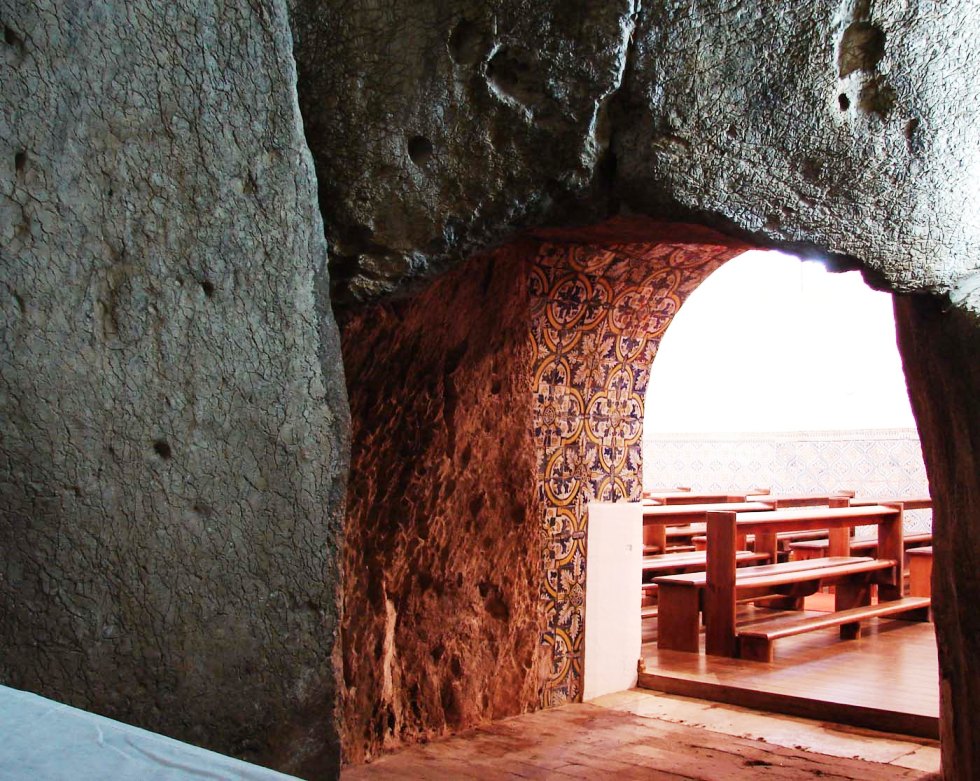