Carrazeda Ansiães tapirs are two that deserve our visit: a Anta Vilarinho Castanheira and Anta Zedes.
Are rare tapirs with good quality tourism in the district of Bragança, unlike other prehistoric manifestations as many pre-Romanesque villages, some truly remarkable, too much for its scenery often associated with the Douro River. Examples:
-The Castro Valley Eagle (Miranda do Douro) (*);
-São João das Arribas (Miranda do Douro) (**)
To better understand what a tapir and its significance advise reading:
-Anta-Chapel Alcobertas (Rio Maior) (**)
-Anta-chapel of Senhora do Monte (Penedono) (**)
-Anta Arcainha (Oliveira do Hospital) (*)
-Anta tenement (Ovens Algodres) (*)
-Anta's Tapadão (Crato) (**)
Carrazeda Ansiães has its well publicized on the internet and it's remarkable heritage site Interpretation Centre Castle Ansiães to remove the text on the Anta Vilarinho Castanheira we put almost entirely with only slight changes.
“A anta Vilarinho Chestnut, large, also known as Pala da Moura, is part of a type frequently seen in the megalithic funerary architecture. 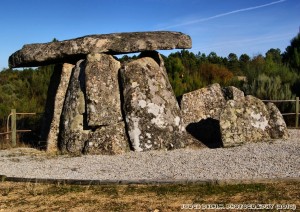 This before, that no longer has any trace of his mound, is structured with a polygonal chamber consists of eight pillars which includes the slab headboard. It also has a cover and a runner-driven spring. This primitive corridor is possible to observe four megaliths apparently still in situ.
The inside of one of the mainstays can perceive faint traces of a primitive pictorial composition.
Near this monument there is a mill recovered and included in its original landscape. This is another reason that can complement your sight. "
Image credit: Although he collected photographs of Anta Vilarinho Castanheira decided to put friend Jorge Delfim that with your "corner"Much has been trying to help the district of Bragança.
Thanks: The Remarkable Portugal was housed n magnificent rural housing Couple Tralhariz (Chestnut-Carrazeda Ansiães) e visitou a Anta Vilarinho Castanheira, invitation to this great Hotel Rural supporting the turismo cultural.