A Anta Zedes, is one of the most important of the District of Bragança.Para be swifter in writing, I adopt the text drawn on the Anta Vilarinho Castanheira.
Are rare tapirs with good quality tourism in the district of Bragança, unlike other prehistoric manifestations as many pre-Romanesque villages, some truly remarkable, too much for its scenery often associated with the Douro River. Examples:
-The Castro Valley Eagle (Miranda do Douro) (*);
–São João das Arribas (Miranda do Douro) (**)
To better understand what a tapir and its significance advise reading:
–Anta-Chapel Alcobertas (Rio Maior) (**)
–Anta-chapel of Senhora do Monte (Penedono) (**)
–Anta Arcainha (Oliveira do Hospital) (*)
–Anta tenement (Ovens Algodres) (*)
–Anta's Tapadão (Crato) (**)
Popular tradition relates that this tapir is the Casa da Moura. It is said that the cliff covering the other was brought to the head of a Moorish carrying a child on his back and, yet, rolled a ball of wool. Anta Zedes also known as the Casa da Moura, probably dates to the third millennium. C. and comprises a polygonal chamber,, comprises nine pillars imbricated, upon which the slab. Your entry, turn to this, is marked by the existence of a “lobby”, 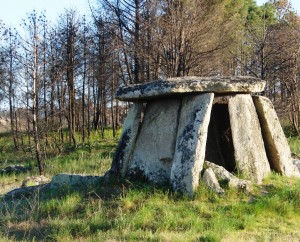 No 2º, 3And 4 pillars on the south side, in its inner part, retain a few traces of ocher paintings and motifs whose contours are poorly defined, although some are represented by wavy lines topped “staff”. This monument has been the target of frequent publications and is one of the most popular properties in the area and studied transmontana.Nas excavations in two fragments were collected manually pottery and flint knife.
Thanks: The Remarkable Portugal was housed in the magnificent rural housing Couple Tralhariz (Chestnut-Carrazeda Ansiães) e visitou a Anta Zedes, invitation to this great Hotel Rural supporting the turismo cultural.