The county of Ovens Algodres has two tapirs, both granite and classified as a Public Interest: a de Corgas Slaughter e a Anta tenement, both subject to detailed investigation and presented in the best possible way for the traveler. But if it only has time to visit a, I advise you to choose the Anta tenement, What is noteworthy, by its size and by being more complete: Here you can admire the camera 2,5 meters in diameter and 3 meters, composed of eight struts slightly inclined to the center, com monumental chapéu; running despite degraded features are three pillars; can still witness the mound (mound of earth and stone that surrounded the stone structure) is partially visible. 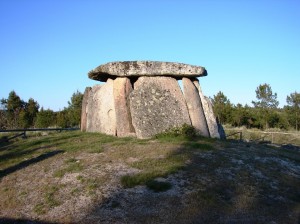 Says local panel location disclosure that "some of the mainstays of the chamber still has faint traces of red ocher painting", but to my untrained eye does not ushered; perhaps the reader will come here…
Was studied in the late nineteenth century by Leite de Vasconcelos and has recently been the target of an intervention by the former IPPAR and the Office of Archaeology Furnace Algodres; found up some arrowheads, stone axes and some ceramic fragments.
This before, as all other, was built in the Neolithic (4º milénio a.C.) and this was even reused in the Chalcolithic (3º milénio a.C.). To understand its meaning magical-religious can read in Portugal Remarkable article on Anta Arcainha (*) Oliveira do Hospital.
It is true that ignorance is evil, but neither is it contagious, so if demand region, be sure to visit some of their archaeological remains, especially the most showy monuments, as exemplified by this Anta tenement.