The Grand Commandery of Anta Church was visited by us inadvertently. I explain better, zarpávamo us the direction we Pilgrimage of Homes at Delicioso, National Road No. 2, from Montemor-o-Novo, at dusk when a sixth sense strange tourist struck us and warned me that I was spending close to an admirable point of Portugal Tourism. Brake the car GPS watch and see the pin in an archaeological point and return back, obviously my traveling companions not desired, but spied my strange and immersed look as if to say, well not dug little. Cease then to a farm gate, obviously closed but unlocked and alas here we go, near many cattle were large and perhaps wild- alguma expectation and adrenaline flowing in the blood vessels. And soon we got to the pin of GPS, the distance those big black animal started running towards us and I thought; stand the shock of the car or it would be better to run one lot of magic stones that stood? The bons of bugs, wisdom and ultimately had passed by and disappeared. Uf!

And so we can analyze, although somewhat hurriedly, Dolmen of the Commandery of the Church situated in a fabulous oaks mounted.
A very rich region of megalithic monuments, this Grand Commandery of Anta Church one of the most monumental and well preserved our territory and which is classified as a National Monument since 1936
The Grand Commandery of tapir Church consists of a long corridor with an unusual width, still partly covered by the respective caps.
The chamber, that with runner, returned as usual for this spring, perfaz cerca de 16 m long, is partially surrounded by the mound, This approximately 35 meters in diameter. In the chamber with about eight pillars 4 feet tall sustain a monumental cover, which unfortunately is fractured and the two parties inclined inwards, the same will to unite and poe up the traveler to imagine how; I read somewhere that people say that the slab was broken by lightning. Hum, there will be here any associated legend?
As in Anta Grande do Tapadão (Crato), seems that this fabulous monument was planned, such is the regularity of its architecture. 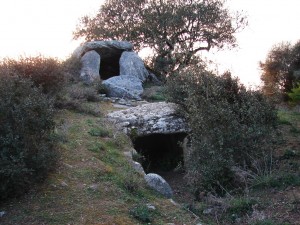 The Grand Commandery of Anta Church will have been built between the end of the fourth and mid-third millennium. C
Green magic bunnies in Dolmen Church of Commendation
This monument was removed a valuable collection, composed of several arrowheads, alabardas, accounts, plates shale idols, staffs, ceramic vessels and green bunnies in stone. Incidentally this dolmen could also be known as the Antas of Rabbits, because all the band are young rabbits burrows, immense inside the giant stone. All this material accompanied the dead on his quest for eternity. All this remarkable estate is in the National Museum of Archaeology, Here as you can see here.
But now if you do not mind I'll talk a little more rabbits. These are often among the spoils of megalithic monuments or contemporary caves. It is then representations of rodents, engraved and cut to the bone, ivory or greenish stone very rare (Jadeite, anfibolite…) most of rabbits with the anatomy, hares or láparos. Arguably this animal to own cults that may be associated with fertility cults, a Lua, be an animal sacrifice ritual or also for living in burrows / Caves psicopombo and be a companion of the dead animals in tapirs. 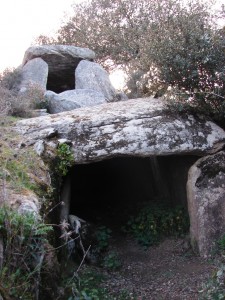 The Grand Commandery of Anta Church was used as shelter by shepherds and travelers aimlessly, until a few years. We always have some acumen these trips (although it does not seem) shook up quickly and headed to Delicioso, already on the road and in the municipality of Mora even saw some more tapirs, but as it was almost night we stopped not long in these.
The Grand Commandery of Anta Church, along with tapirs:

-Anta da Herdade das Heads (*) (Blackberry)
is one of the most impressive Portuguese megaliths.
How to get there: From Montemor-o-Novo, Take the N2 for 12km. Just before S. Geraldo is our anta. This is about 400m from the road.
Here close: Near the village of Delicioso recommended a visit to the Tower of Eagles.
GPS coordinates: 38°45’28.67 “N 8 ° 12'11 .53″In
Additional References:
Site: Shadowsandstone- Do not know who Ken Williams here but have great photos on the Great Dolmen of Commendation of the Church and some other Portuguese famous megaliths.
Blog- Megaantas- The adventures and misadventures of rare famous archaeologist Leonor Rocha in the realm of dolmens and menhirs of the Alentejo and knows the territory like the back of your hand.