Anta Grande do Zambujeiro (Évora) (***)- A Neolithic cathedral do Degraded 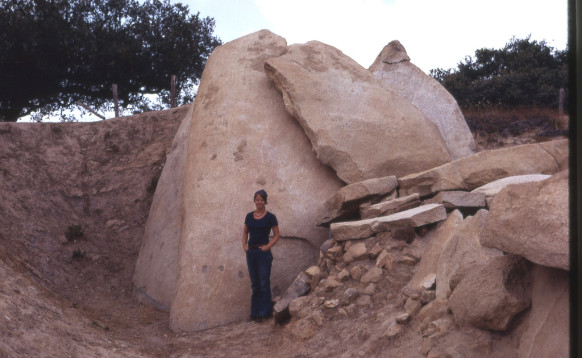 The Great Dolmen of Portuguese tapir is the largest and one of the most monumental of Europe. Its colossal dimensions and its symbolism put it among one of the most remarkable world megalithic pieces.
It is near the village of “Valverde (Évora)”. It was constructed from 4.000 and 3.500 a.C. .
The tapir Grande do Zambujeiro has hall and polygonal chamber seven pillars with about 6 meters, leaning against each other wedge and covered by a huge stone lid displaced when it was excavated shortly after its discovery.

The corridor defined by struts and with 3 stones cover estimated 15 meters long and allows it to circulate standing.
Nearest the camera running is divided in the middle, which corresponds to a complexity in the typology of corridors. An imposing stone menírica helps sustain the imposing stone that closes the camera input.
The mound surrounding the dolmen is also huge, over 50 meters in diameter and is formed by spaced crowns of stone to maintain consistency in the same, having been unfortunately gutted when the excavations conducted in the years 60. These works were effectively degraded badly made and the huge magnificent monument. 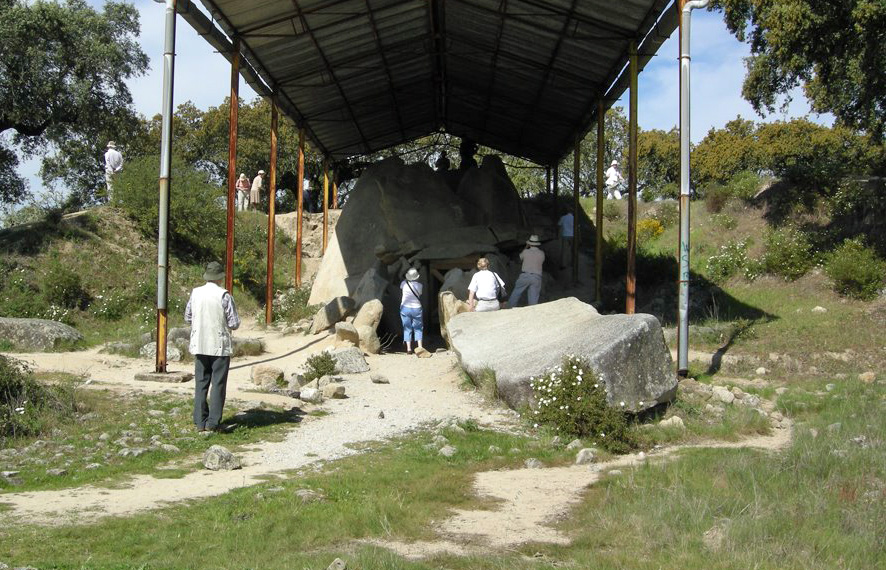 Discovered Monument, weathered monument
The German archaeologist Philine Kalb describes the work Sternstunden der Archäologie, It melts in Portugal as it was discovered that the bumpy and anta Great Zambujeiro.
“The school teacher Henrique Pina was called Montemor-o-Novo; Pina had some experience in tapirs, but it was not a professional archaeologist. The dolmen was surrounded by a gigantic mound. The cap that estava under the Mamoa 6 meters was removed, leaving. There came the workers, taking shale plates and inside the ceramic remains of the vault.
It took the 1965 a 1969 to lay bare the huge dolmen. The crypt was blocked by a stalwart weighing tons; this stone had fallen in prehistoric times. Este come Selwa Kripta Stio, It was also removed.
“Today we know that the huge stone tumbled to the left of the hallway, a stele menhir, It was transported from its distant source site over 8 km.”2 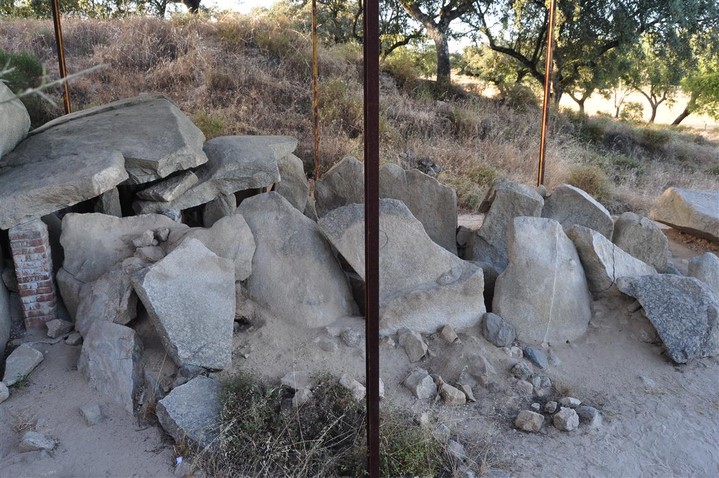 Not worth much rankings as a National Monument; or dolmen, easily accessible to the public, has been continually vandalized, the walls are full of graffittis; shamans "New Age" which have sparked flames several pseudo rituals inside the crypt. Recently, the entrance was blocked with a door … wooden. The Great Dolmen of is provisionally protected by an awful metal roof Zinc.
The estate is found with remarkable idol plates, ceramics, arrowheads in Flint, copper tools and necklaces of green bills that are in the National Museum of Évora (***). This impressive monument illustrates the technical capacity and complexity of social organization of the Neolithic people who built it.
The exterior of the tapir is also unique to the existence of an atrium (a zone free entry to the hall) flanked by a slab lying, perhaps a stela-menhir however fallen or never raised and another stela-menhir, farther from the mound, currently tumbled and studded fossetes and, If you find that once pigmented. The dolmen itself will have possessed, painted decoration inside a mainstay of the chamber.
Dolmen of A Big was a true shrine can serve as the epicenter another set of megaliths which lie in a large area around and were used between about 3550 a.C e 2900 a.C.

The Great Dolmen of lies to this very close to Cromleque and menhir Almendres and west of the city of Évora.

Anta Grande do Zambujeiro and future Archaeological Park Megalithic Alentejo
It is important to study Portugal, restore and put the provision of tourism our remarkable heritage, this will lead to an increase in our national self-esteem that is essential for the growth of a nation and every notable point is a financial asset that will be worth much more profitable, is an irreplaceable resource.
So is this like the megalithic richness of this Alentejo region that seems appropriate to express three wishes.
– the Great Dolmen of dignity is restored and valued, at least as it was in years 60 before their clumsy desentulhos pseudo-archaeological;
– What is a megalithic archaeological park created, similar to what exists in the Coa Archaeological Park, with the advantage that you can receive more visitors, given the proximity of Lisbon and the main access road to the Portuguese border; obviously here include a wide dozen megalithic monuments. Here are some notable examples that could be part of the park route: the Cromlech Almendres (***), as antas Chapel of Pavia (*) and Are Brissos (*), the caves Escoural (***), a Dolmen of the Church of Commendation, Anta's Silval (*), Anta homestead of the Palace of vines 1(*), the cromlech of Portela Mogos Maria Valley and the Environment (*) or megalithic Set Rodrigo Valley (*).
– The future park is the subject of an application for World Heritage- UNESCO given the high density megalithic, monumentalization a Neolithic landscape, the similarity of the archaeological site of Bend of Boyne (a 50 km north of Dublin) already UNESCO and which concentrate the megaliths of Newgrange, Knowth and Dowth and respective satellites megaliths.

But while little is done to monetize our archaeological heritage we strongly recommend a walk through the Alentejo hills, the lead tapir Grande do Zambujeiro this because there are a lot of beauty and mystery in everything that surrounds us and the Stendhal syndrome may plaguing him before aesthetics, science and mystery of the megaliths and the magnificent Alentejo fields.
Additional References:
Book:

1-Magic Places of Portugal-Archaic landscapes of Paul Pereira Circle of Readers, 2004), book that is part of a magnificent collection depicting places, monuments and landscapes related to the sacred history, legendary and magic of our territory. In this title, the first collection Magic Places of Portugal, will learn the testimonies left by prehistoric men in Portuguese territory, including the Coa Valley, Grotto Escoural, large Alentejo tapirs as the great Dolmen of, Dólmenes painted, the cromlechs, large Meñir, Writing Stone Serrazes, Old Castle of Ash Numão, the stelae and the valleys of the Tagus and Guadiana.

Site: http://uevora.academia.edu/LeonorRocha/Papers/152565/Parque_do_Megalitismo_de_Evora_uma_utopia_alentejana-Leonor Rocha, whom the Portuguese archeology due to suae demand megaliths Alentejo this article argues the creation of an Archaeological Park ( do not miss).