Pegões aqueduct (Take) (***)-one of the most remarkable of Portugal

The Aqueduct of Pegões Altos in Tomar is one of the most remarkable of Portugal, has aquedutos Rear:
Silver Water – Évora
-Free Waters – Lisbon
-Mulberry – Elvas
-San Sebastian or the Garden – Coimbra
The Pegões aqueduct is a remarkable piece of engineering and architecture. It was erected by the will of Philip I of Portugal, II Spain, when he tried to seduce Portugal to their cause, to supply or Convento de Cristo, listed as a World Heritage Site and runs four miles from Pegoes to the fabulous main monastery cloister.
Since its building, Take the monastic house had an elaborate water supply system, formed by a series of tanks, open the main cloisters were filled with rainwater. 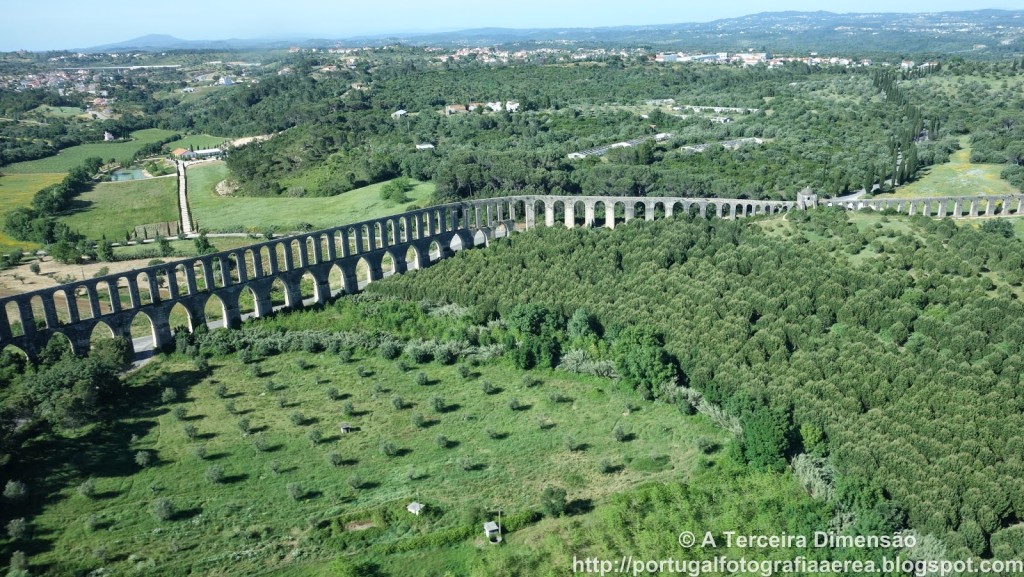 During his stay in Portugal, after acclaimed king in Portuguese Taking cuts, Philippe decided to expand the water supply of the Convent of Christ, then verifying the need to build an aqueduct, a structure similar to that had been built up in Elvas and Évora, being repeated model a few years later in the Vila do Conde Aqueduct, which supplied the Santa Clara Convent.

The construction of the aqueduct began in Pegões 1593 the moth and supervision of Philip Terzi, and was completed by Pedro Fernandes de Torres in 1614. 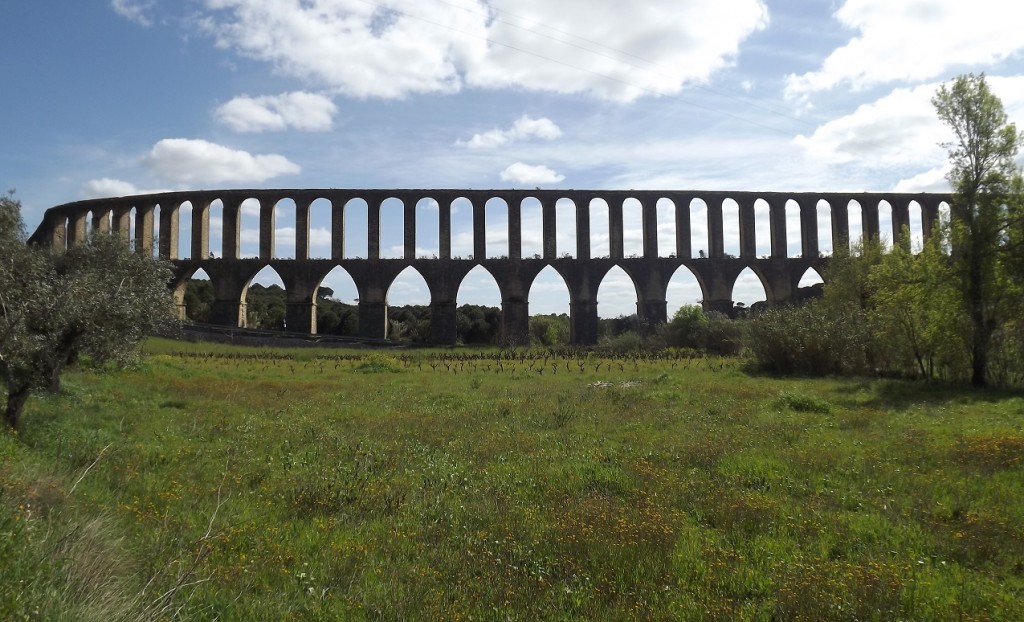 Reaching around the convent, the aqueduct Pegões would lead to an irrigation tank, next to which a Latin inscription that refers to the execution of the work was placed. In 1616, the channeling of the aqueduct was extended to the building convent, reaching the basin of the dorms next year, and reaching the source of the main cloister in 1619, date on which it was concluded the work.
In 1614 Philip II came to Portugal inaugurate the work, as indicated by the inscription on the aqueduct Pegões.
There are three water mothers Pegões aqueduct: Springs of the Iron Door, the Pipa Valley and Pipe. 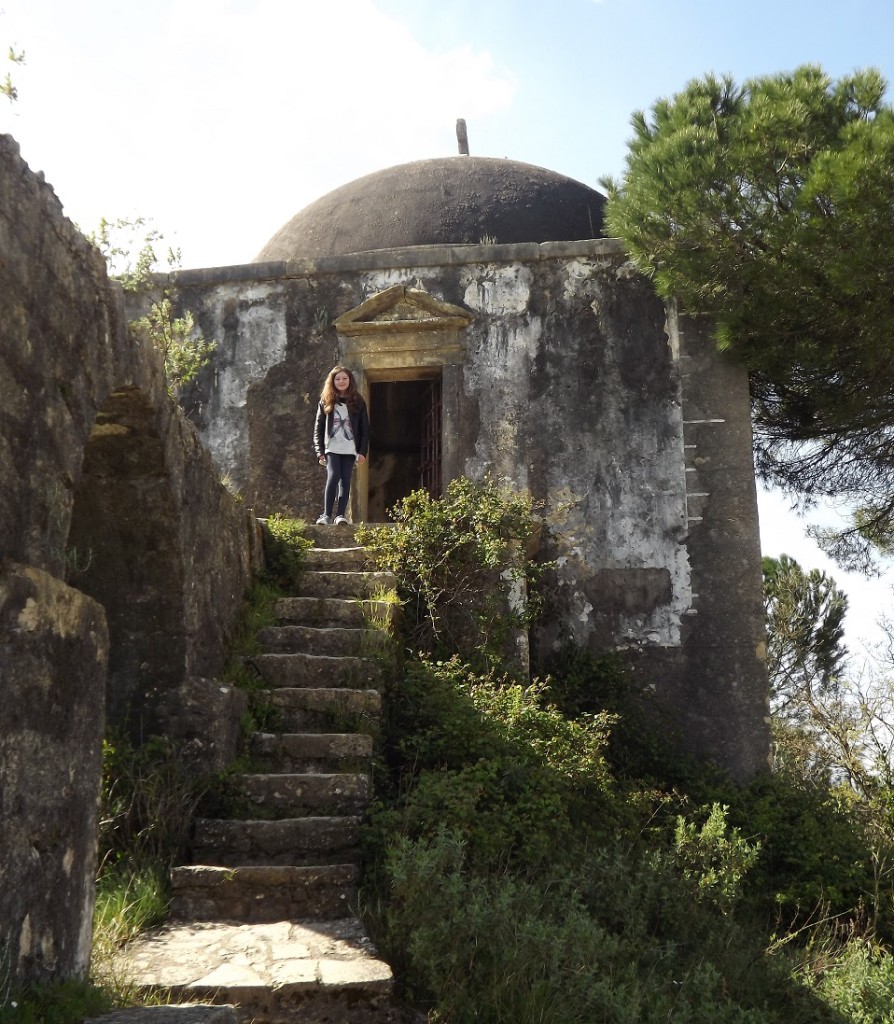 For much of the journey be underground (throughout their length only about 1350 meters are above the surface) and pass through private land, its existence almost unnoticed. As we are aware of his greatness in the valley Pegoes, when we are overwhelmed by its grandeur. This engineering feat is composed of a total of 180 arches and constituted, in some sections, two superposed rows. The construction scheme is comprised of one row of circular arcs robust and alteados in areas of low height. When the land won by the aqueduct has a larger gap, in the valley of Pegoes, this consists of two orders of arches, with the bottom formed by powerful and resistant pointed arches, arches similar to that which would be employed in building the eighteenth century Águas Livres Aqueduct, in Alcantara Valley area.

In the Valley of the aqueduct has Pegoes 58 rounded arches, in the uppermost part, about 16 pointed arches supported on pillars. It has a maximum height of 30 meters.
At the top of the aqueduct Pegões runs a parapet, that protects the channel through which the precious liquid is conducted. 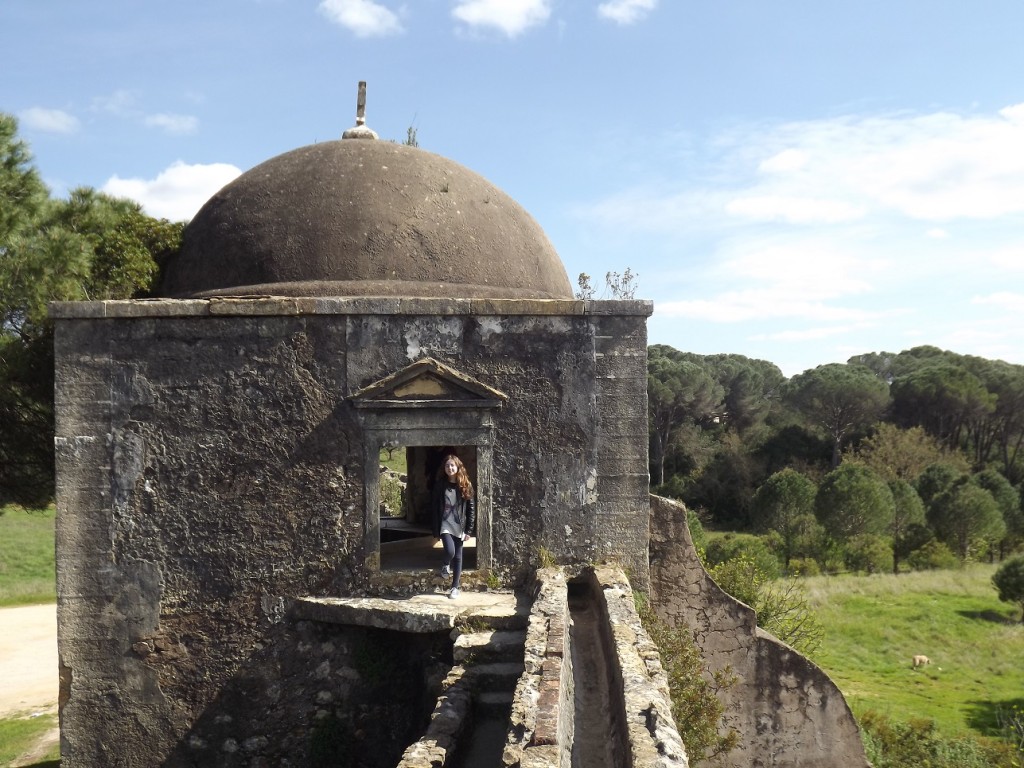 Unlike for example the Aqueduct of the Free Waters in Lisbon, Making air travel in an urban area very noisy and malparecida, is great environmental beauty in the valley Pegões.
The example most of your sloppiness is in his iconic "Water houses" Mannerist. These houses abobadadas, who have in the center, a sink intended for settling and that both look like holy temples, dedicated water, therefore a kind of "ninfeus Christians", are degraded rapidly and deserve to be restored, because we feel that é thorough work, but not costly. These houses have served as a public toilet, and are continually vandalized by coarse who insist on leaving their lasting marks on the walls. 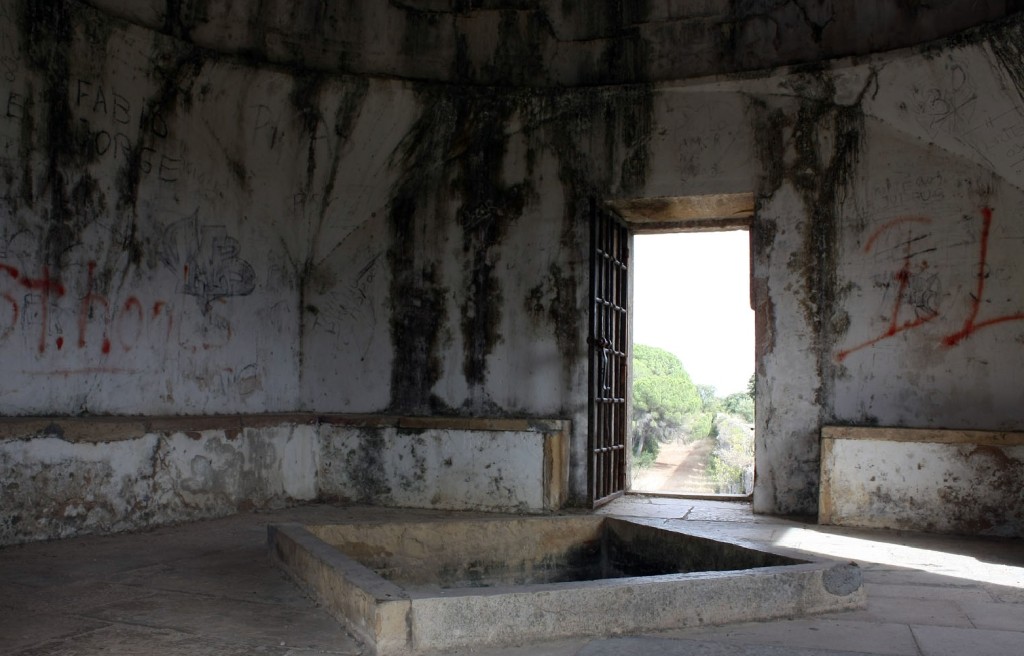 The most scenic Portuguese aqueduct made 400 years, last year, and was not subject to a celebration, even memory by Portuguese, what we dishonor, alias the aqueduct Pegões, has been treated with disregard and has disinterest, since losing its usefulness in water transport function, but no doubt that any Portuguese worthy of the name should the visit or at least have that intention.
It is classified as a National Monument since 1910. 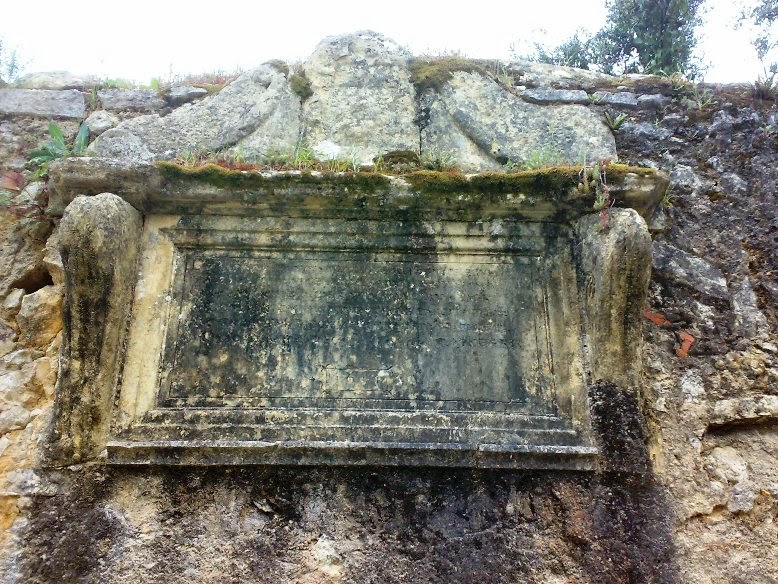 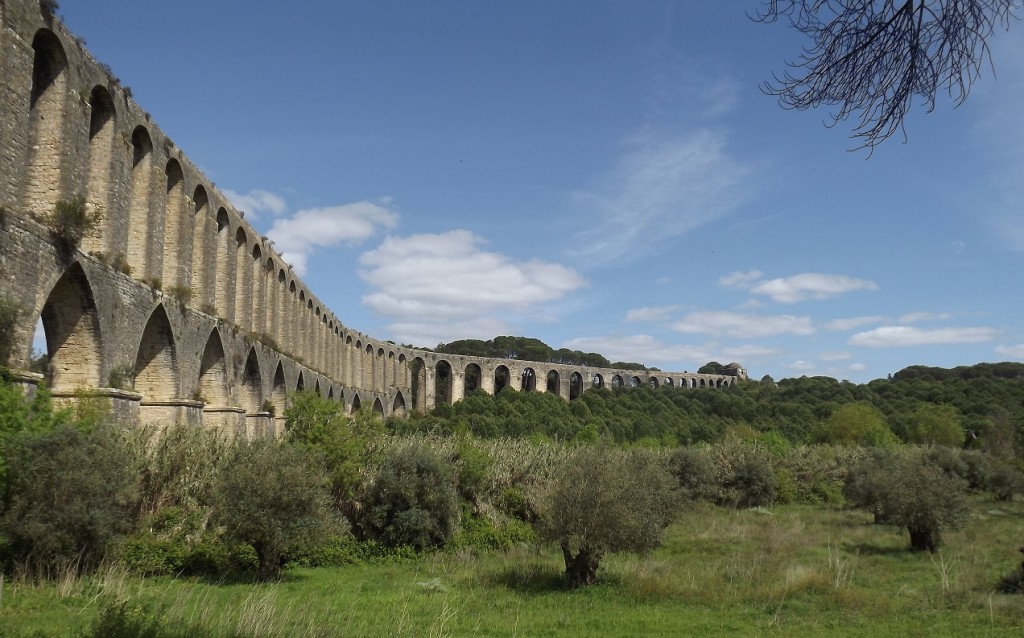 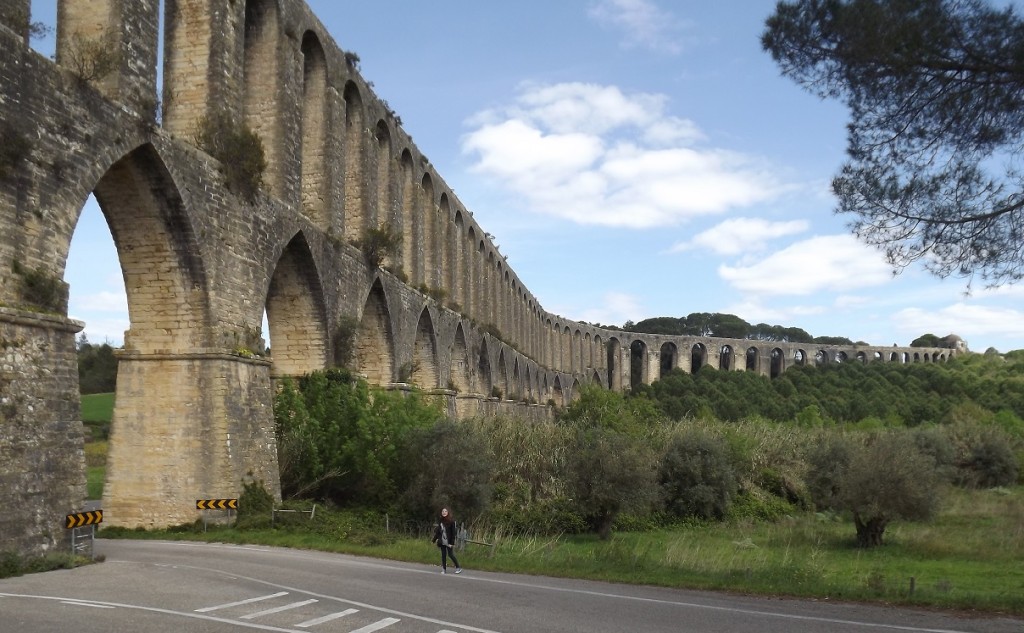 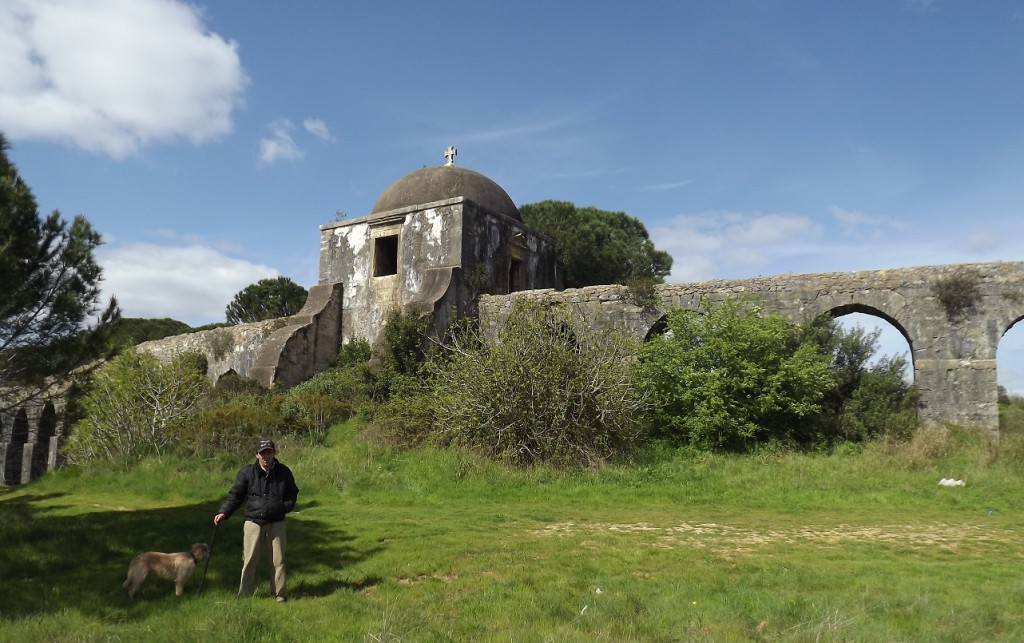