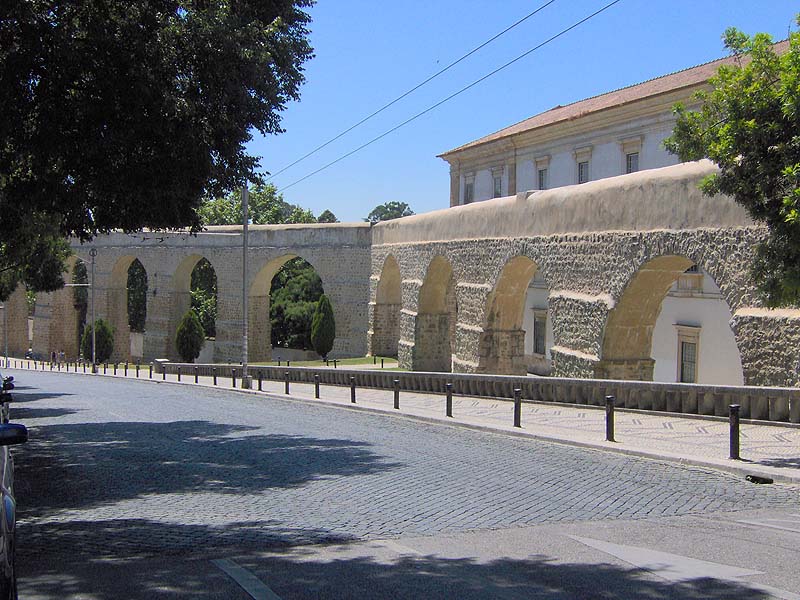 The Arches Garden, by stood adjacent to the Botanical Garden of Coimbra, is also known as Aqueduct S. Sebastian was built in between 1568 and 1570, on what was once a Roman aqueduct that served to fuel the rise of Coimbra. Garden arches were built by Italian engineer Philip Terzio, in the reign of D. Sebastian.
One of the arches of the aqueduct has the statue of S. Sebastian on one side and S. Roque another, junto à casa Museu Bissaya Barreto.
The Arches Garden connected the hills where stood the Monastery of Santana and the Castle, winning a depression at twenty-one arches, daí ter sido, in ancient times, known as the aqueduct of Santana.
This Monte de Santana was a place where water flowed copious. In the place where there is a simple monument dedicated to student Coimbra is located in a small pond in the garden which lies opposite the Botanical Gardens and next to Bissaya Barreto Museum House which is still constantly being fed by a spring that fed the previously source Santana, There is this remarkable picture of Georg Vivian, edited at “Scenery of Portugal an Spain”, 1839, abstracted from the nose of the Convent of Santana. Maybe it was not too difficult to reconstruct this source, what would value more than one sector of Coimbra beyond Arches Garden, also has the notable point the magnificent Botanical Garden and Home Bissaia Barreto Museum. 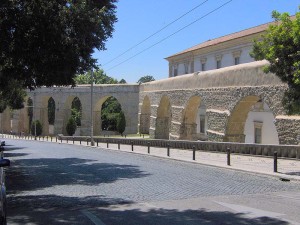 The Arcos Gardens had the 21 arches supported on strong pillars, reinforced by steps on the outer face. The entire work is masonry dolomitic rocks, although some rest on pillars materials gresosos (sandstones and conglomerates), expeto the arch of honor and triumphal, made of stone on stone Ançã (Middle Jurassic limestone).
After and even off the Fair (magnificent square where today stands the New Cathedral and surrounding buildings which were barbarously destroyed by the Estado Novo in the forties of the last century) the route of underground water was, and finished in a beautiful Renaissance fountain in "moonlighting", which by their location and capacity was a major city.
The appearance of the Arcos Gardens has not always been what we now know as, abutting the aqueduct, there were a number of constructions, including excelled: Home of the Teresianas, Leiteiria the Academic Joaquim “Pirate” and the Lyceum College (this space was adapted to the beautiful church of St. Benedict of Renaissance.
Refer to, with the demolition of houses, was also below, in 1959, an arc that made it difficult to link the street from the Arc of Treason Walk with Martim de Freitas (current access road Largo D. Dinis). The Arches Garden have now 20 arches.
The arch of honor is oblique adapted to trace the old road. Has four large entries, two Latin and two in Portuguese in which the date of building in 1570 and the royal patronage of Don Sebastian are clearly expressed. In the topo to crown the arch, built a templete, with Doric columns, brick dome and lantern with two sculptures, one of the martyr Saint Sebastian, south side and another evocative of San Roque, North side. Want gravestones with good frames Renaissance wants templete and respective sculptures are certainly works of Jean de Rouen workshop.