1- The construction of mini-hydro in Mondego river is about to be canceled
Congratulations is the struggle waged by Platform Mondego Vivo and the people of the districts of Coimbra, Poiares and Penacova and other good people who are involved in this fight in defense of the natural environment of our Mondego River, its beauty and biodiversity, of agricultural terrain adjacentes, WORKED the posts linked companies Desportes adventure and gastronomic dish of LAMPRE.
The reasons for this sense of victory are two: The Committee on the Environment, Spatial planning and Local Government Assembly of the Republic approved the report unanimously that meant the definitive cancellation of mini-hydro in Mondego river and the government has suspended the allocation on power grid for new small hydro.
Leia here for full news.
2- Despite the crisis affecting our country 2011 had an increase in the number of tourists
The tourism sector continues to have great resilience in such an adverse time for Portugal.
"In the year of 2011, the hotelier received about 14,1 million guests, Originating 39,6 million overnight stays which, compared 2010, translates into growth of 3,8% and 5,9%, respectively. The increase of foreign tourists was 10,4%, face a year 2010, however, domestic tourists showed a fall of 1.9%. "
Read the news here.
3- The city of Porto is the best European destination for BestEuropean Destination
After Lisbon have won the award in 2010, this year was Invicta that seduziu Users of the Best European Destination, snatching first place in competition.
At the site of winners, the organization of the award underlines the historical importance of the city and its strong connection to the Port Wine. “With a variety of resources, Port conquers all visitors, both looking for history and tradition, as they want me cosmopolitan cities”, reads the official site.
Twenty cities of Europe competiam, this year, for the first 10 Best places of the European Destination. The list of top three followed the order: Port (Portugal), Vienna (Áustria) s Dubrovnik (Croatia).
We remaining places, Lisbon comes back well placed conquering the 08 th position in the ranking, following the Budapest (Hungary) and ahead of Florence (Italy).
According to the official statement of the event, over 212 thousand people participated in the vote which was open to the general public. 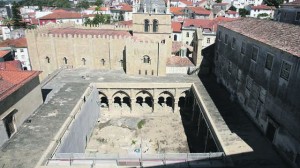 As 3 Worst News Tour of Portugal

1- Despite the end of this month have started raining situation "Severe Drought" remain to Portugal, April hopefully bring in Águas de facto Mil, contrived for a more serious problem that plagues us.
Read the news here
2- Forbidden access to Roman Bridge of Vila Formosa by individuals
It's amazing but the common good is still vilified by individual well. How is it possible that our most beautiful Roman bridge is sealed to their owners, we are all of us, the whim of someone who does not respect our cultural values ​​tour? Anyway ...
Read here all the news.
3- The works in the cloister of the Old Cathedral of Coimbra still stops
The works of redevelopment of the cloisters of Old Cathedral of Coimbra, Discontinued since May 2011 due to bankruptcy of the company responsible, still stops at 2012 and now even more so those who want to visit such a beautiful monument of our city have to pay admission. This option is our agreement.
Read the news here