Panorama of the dam Bemposta / Cardal the Douro River (*) (Mogadouro)

Panorama of the dam Bemposta / Cardal the Douro River (Mogadouro)

A dam Bemposta, in the county of Mogador and located in Natural Park of Douro International, is impressive and deserves our attention, but it is the scenery that attracts more downstream in because here the River Douro traverses its original bed relatively. Here the river gradually slips between small boulders, Riverain forests and sandy beaches. This small stretch of about 2km reconstructs the primitive Douro landscape that has been changed, more than 30 years with the building 5 Hydropower uses the Douro International (Miranda do Douro, Picote, Bemposta, Aldeadávila e Saucelhe).
In this viewpoint it is observed on the Spanish side the mouth of the River Tormes been born in Sierra de Gredos, passes Salamanca (*****) and flows here. 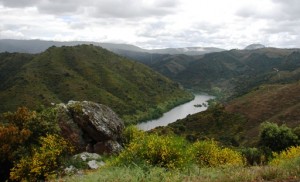 In Dam Bemposta territory on the banks of the Douro River is less harsh due to its schist lithology, the vineyards and olive groves give rise to wine and olive oil of excellent quality, that somehow still may have a better development. From this area the river Douro shall retrace a valley embedded in granite.
Residential neighborhood of Cardal
"The Cardal the Douro, also known as Barrio EDP, lies in Dam Bemposta. It is a modern neighborhood, Built in the 60, for those working in the construction of Bemposta Dam, Production Centre for Hydropower. Curious case which came to distinguish this working-class neighborhood, the panorama of the national architecture, was its innovative and advanced construction for the time. It is still spoken in the manuals of matter.

Workers who remain here, are known to barragistas, because they were not usually originate in Bemposta, but coming from the North Coast of Portugal, having been formed and fixed here family.
Today, this district hosts many outsiders, who purchased these homes, to holiday, rest, or escape the hustle and bustle of cities. This exchange of residents was only possible because the EDP commands centralize these dams in Miranda do Douro, transferring its technical there, leaving their homes unoccupied ".
This last paragraph was removed from the site Bemposta. Here you can also read a good article on the impact of the construction of the dam in the village that village Bemposta.

Thanks: The Remarkable been housed in Portugal Solar Marcos (Bemposta-Mogadouro) e visitou a Dam Bemposta invitation to this great Hotel Rural supporting the turismo cultural.