There are beautiful places in Portugal and completely alienated from tourist itineraries, are lost somewhere in the mists of time and fell into oblivion. It is the case of this scenario grandiloquent Bogalhal Velho.
An example is the abandoned medieval village of Santa Maria in Porto de Vide, commonly known as Bogalhal Velho. It is a solemn place of immense scenic beauty.
Upon arriving we find the poetic ruins of a village, he had some important medieval, surrounded by shrubland, having just standing Gothic Skeleton Church (typical of medieval temples in the region), traces of houses and walls. 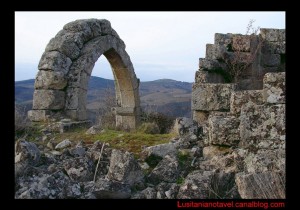 The location should have been abandoned in the late Middle Ages, similar to what happened with the neighboring village of Monforte Castle (Figueira de Castelo Rodrigo); and may have been a strategic point in the defense of the Kingdom before Alcanices. In historical time zone beirã streak, due to its periphery, to its extreme climate and disputing with the neighboring kingdom, was always repulsive to human occupation during our nationality.
However the beauty of the place and the existence of a church, possible that the site continued to be frequented by annual processions for some time- that are always the last gasp of a dying town. Then even those ceased and the site was forgotten, until the mayor Pinhel, in good time, já and in the XXI century, made possible its accessibility.
The village is based on a granite hillock, with 500 m quota, and could have been a fortified crasto. This is limited by an impassable granite escarpment, excavated peel the Ribeira Goats, no remaining perimeter, would probably be surrounded by walls.
The Ribeira das Cabras and the Coa in Old Bogalhal
It is worth notável the fit of the Bank of Goats, which has here its mouth in the Coa River. The altimetry gap reaches a vertiginous 110 m.
The North wanders the magical river Coa, housed in the foothills of the Sierra Marofa, prepared to break the strong quartz wall and later breaking through river canyon in Cidadelhe (***) (this village is one of the most beautiful locations in all of Beira Interior). Saw, What is the compass of the region, emerges with all its splendor, from St. Anthony to the top of Marofa (**).
Here sit the Mustang mediterranean environment and is thought to the geological complexity; come up crocitantes agitated birds (we are in the area of ​​Natura 2000) Cutting the heavens and you hear the sound of water in the bottom link of the rock ... and the abyss, forever in perpetual attraction. It is a must for anyone who does Tourism Pinhel.

Carrazeda Ansiães, Regions of Portugal, Distrito-Bragança, All articles
27 de May de 20118 of June of 2011

31 March 2019: Cultural tour to the Poets Park – Tribute to Sophia – and the Marquis of Pombal's Palace in Oeiras

Retrospective of PORTUGAL REMARKABLE in 2014 and targets for 2015