The Church of Castro Hazelnuts is another site that should meet your script in the Romance of the northeastern. I remind the reader, that the natural stuff is not alien, the itinerary consists of the following monuments. Here you can read about what has been written by us in relation to Romanesque monuments.

In two days can look with equanimity this rich heritage which also integrate some castles and your towers as Homage (Algoso, Ansiães and Feathers Róias) and yet the Romanesque church of Malhadas in Miranda do Douro and the church of St. facundo in Bragança. No doubt that here we have a magnificent set that deserves to be encompassed in a single tour package.
The Monastery of Castro Hazel was a grand monument that time and neglect of men were gradually dismantled. The Benedictine monastery that existed in the twelfth century and was a sick institution, enjoyer of multiple incomes. Perhaps this was the most powerful religious institution Bring-os-Montes during the medieval period.

In March 1387 the monastery as a guest received the Duke of Lancaster, with his entourage, on the eve of his meeting with D. João I, Babe of the plateau, in marriage of his daughter-D. Filipa de Lencastre – with the Portuguese king. The English duke made him escort a thousand warriors, some of them tried in the famous Battle of Crécy.

The monastery was abolished by a bull of Pope Paul III, dated 1543, and linked to the newly created diocese of Miranda do Douro. The change of goods made in the following year, getting handed its administration to the friars of the monastery, with their obligation to provide for the Sé mirandesa share of the rents stipulated. The dependencies of the monastery were bulldozed and some of the materials reaproveitaram into contracts of a religious nature which succeeded the city of Bragança.
With the succession of time, the monastery and church of Castro Hazel have been abandoned and virtually disappeared, except for the notable Romanesque church bedside.

The Headboard Romanesque Church of Castro Hazelnuts is unique in Portugal

The head of the church's Castro Hazelnuts comprises three chapels round the apse one-and two apses – in Romanesque-Mudejar. The headboard is covered with natural stone tiled, spun and finished brick em zigzags. The chapel has three registers of blind arcades, with slits in the lower arches. The apses have two registers of blind arcades. The exclusive use of brick walls in the growth and continued filling curves surfaces of the walls with blind arcades, three records in the chancel and two on the side, relate this construction with other Mudejar style that arose in the lands of León and Castile, especially important focus of Sahagun highlighting the Church of S. Lorenzo de Sahagum and in general, in the region between Toro and Segovia. The Church of Castro Hazelnuts was chalked to have three ships that aisles, probably, did not reach. 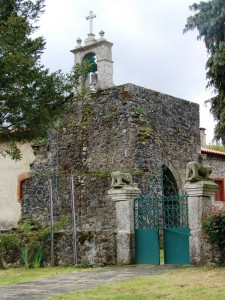 Later, already in the eighteenth century, it gained a rectangular nature, with the vestry addorsed the left absidíolo.

The mysterious tomb of the Earl of Aria

Within one absidí-olos, now open abroad, lurks in interesting granite tomb chest of drawers, with prismatic form which gathers a fourteenth century date and believed to be the cover of Dom Nuno Martins Chacim, one mighty men of Tras-os-Montes and even the kingdom of Portugal in the thirteenth century. For example, Rico was a man and tutor of King D. Dinis, had a tenure of between Bragança 1265 and 1284. Exercised in 1261 and 1276 the office of Bailiff chancel and between 1279 and 1284 Butler was-because the house of D. Afonso III of Portugal.
Legendary are still forced their usurpations and blood to win the entourage and power that reached in life. Dom Nuno was also known as the Earl of Ariães. (read it here). 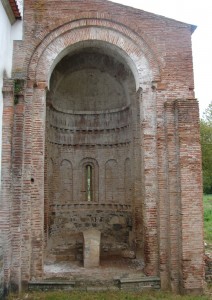 Before we end our tour of the Church of Castro Hazelnuts, I want to leave you with a few more notes:
-Notice dear reader, a strange rectangular Gothic tower with about a dozen feet tall, in granite masonry, topped by a belfry with a bell, that would be part of the monastic premises. The tower was taller and, in the terminal part of the eighteenth century and early nineteenth century, fell to him the height and adapted it a modest steeple. Adjacent to this building is the parish residence given to slouch, preserves in its Romanesque remains low

The Guardians of the Monastery of Castro Hazelnuts

-The churchyard is walled and accessed by frontally iron gate, surmounted by a Latin cross, flanked by pillars of granite ashlar, surmounted by two zoomorphic figures, lying, maybe lions that seem to guard whoever set. Lions are associated with strength and nobility. It is common to find them at the main entrances of religious temples serving as the temple guardians, as if alerted the observer that this place is sacred and restricted. In the Bible, can play a positive character (as the Lion of Judah, Lions throne of Solomon or the Lion of St. Mark) or have a negative image, like lions that Daniel has to face. Stranger is all tours that read make no reference to that fact.
In recent archaeological excavations in agricultural land adjacent to the Church of Castro Hazelnuts, cloister were discovered, the convent wing and some rooms of the former Benedictine Monastery, that have been erected in the Village during the thirteenth century. Archaeologists also found spoils of the Roman Era, estariam related to the way that ligava Braga to Astorga and passaria near this area where, later, monastery was built. Among the remains found stands out pottery, coins and a tombstone dating back to the time between the first and fifth centuries.

These excavations can now be observed in some detail in place. This whole area should be turned into a museum space to activate the village through cultural tourism.
– An advice to you fellow traveler is that when you visit a place like this should repair around, We mounts, because some of them may be called castros, Valued for their imagination and even more for the esteem of scientists. This is the case of this place.

Castro Hazelnuts would be the capital of Zoelas?

Also a hill near here called "Cabeço Castro (or "Old Tower", microtopónimo which immediately alerts for old and missing defensive construction of certain grandeur) has emerged, since the last quarter of the last century numerous valuable archaeological remains of proto-historic era (Iron Age, especially) the Roman rule, further opening up the possibility of maintaining a local occupational continue the Long Middle Ages. The Roman epigraphic findings are particularly numerous and interesting, relating to the ancient fortified town and its surroundings castrejo: some seven or eight burial stars (or fragments thereof), three milestones and many other votive altars (deposited materials, in most, the Abbe Museum Baçal, while the occasional piece will expose in Guimarães, Museum of the Martins Sarmento Society).
In the Aras comes the name of the people of Zoelas, if so this could be important town of the capital Zoelas, great people doer linen, cited by Pliny, people who left us funerary stelae decorated with swastikas circular, symbolizing the Sun, and drawings of animals such as pigs and deer. (Read here in Portugal Roman developed more news on this topic and respective epigraphic collection of the castro of Hazelnuts).