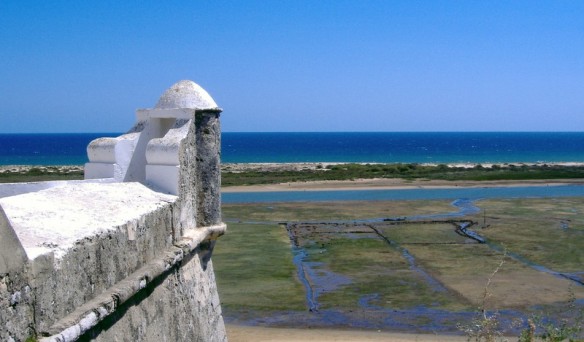 Believe me dear reader that there is still a place in the Algarve preserved, where man and nature come together in perfect harmony. Here, agnostics to suspect the existence of a generous God. Eis Old cacela!
Cacela Velha is located Numa cliff gresosa old miocénica, with 26 m quota; cut to the west, the creek with Cacela old fossil outcrops; have in front of the "river", separated from the sea by a sandy peninsula, embodying a wonderful beach and corresponds to the beginning, the source, the Ria Formosa Natural Park (***). The sea is wonderful blue-green hues and serene waters and warm. Old cacela represents one of the last places in the Algarve coastline that survives a dissolute urbanization.
The Story of Old Cacela
Has very remote foundation for being strategic location surveillance Algarve coast where the boats passed that required the mouth of the River Gilao, because the string of islands, today, is the Natural Park of Ria Formosa (***), for centuries, Open to, algures Cacela between e Manta Rota. Here habitaram cúneos, Phoenicians, Celts, Romans (with major military base) and Muslims. The geometry of the coast in Cacela has been different over time depending on the ocean currents, of storms, earthquakes and human action. Old cacela ever been alteradamente, inside and outside the Ria Formosa, having had ahead, at different times, more or less extensive barrier islands, vast sand bars or. For example, in the early twentieth century, bar Cacela was the terminal point of the estuary, it ending channel of Tavira (**)- maritime access route to that city.
Archaeological excavations in the fortress of Old Broad Cacela, in 2007, resulted in the discovery of the X century medina. We identified seven silos, five of which large. The silos, were used for the storage of grain and other agricultural products, these were grounded many Islamic artifacts. His name was Hisn-Kastala, Qastallat Dararsh, Cacetalate or Cäcile (meadow or pasture cattle), where we derive the current name. In this century, was under the control of the Berber family Banu Daraj. Here Ibn Abu Omar was born in Darrag 958 d.C. who was secretary of the chancellery of Córdoba and famous court poet of Almançor.
Between 1998 and 2000 found an Islamic neighborhood near the river of Cancela Velha, at the bottom of the locality, the driveway to the sandbank, along the wall of rammed earth. The characteristics found revealed the case of housing-farmers and fishermen. Here discovered a sink and two washings khandis bronze found in National Museum of Archaeology (****) Lisbon.
Al Idrisi refers to Cancela Velha as "a fortress built by the sea. Is it well populated and there are many gardens and fields of fig ".

Sancho conquered it in 1240 and lost it soon thereafter, such was the attachment, Muslims had him. But, after two years, Palo Peres Correia return to Portugal and would definitely belong to the order of Santiago by then would be built the first church in the village. The church that exists today, tem Raiz medieval, mas was rebuilt in the sixteenth century. Dinis gave it a charter and from the fifteenth century, declined. 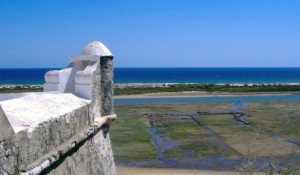 Badly damaged in the earthquake of 1755 still existed in 1758, 821 people. The fortress that exists today was initiated in 1770, By order of the Governor of the Algarve (is closed to the public, to belong to the GNR fiscal brigade). The county was abolished by order of the Marquis of Pombal in 1775, joining the newly created municipality of Vila Real de Santo António.
Old cacela was a key point in the war between absolutists and liberals
In 24 June 1833, liberals entraram Algarve by Cacela, not exactly in the village, but within the limits of the parish, in the Old Tower (Site of the High). The squadron was commanded by 1st Marquis of Vila Flor, later 1st Duke of Third, about 2500 men. Found no significant resistance here, once the task was facilitated by countless diversions, orchestrated in order to leave the absolutist forces in southern Brazil. Quickly the Algarve was won and a month later came the liberal Lisbon. There should be a standard, as with the commemoration of the landing pattern of Mindelo, and relembrasse to tell this very important page of Portuguese history.

Cancela Velha is a unique space in our coastal, indescribably beautiful, that over the centuries has captivated the look (and stay human) and the feeling of the poets. She says about Sofia.
"The strongholds were conquered
For its power and were besieged
The cities by the sea wealth
However Cacela
Was required only for beauty ".
Sofia de Melo Breyner

16 Reasons to Love Old Cacela
We are well on Cancela Velha:
-by divine landscape that can be seen, the immensity of the sea and the dunes that calls us;
-the timeless resonance of Arab poets, lubricious, love meat, eternidade e Plenitude- Ibn forever Darrag;
-the constant presence of Sofia, the sea goddess, I hope ever to see the emergence of a corner by gore-washed blue, with his voice echoing incandescent poems; 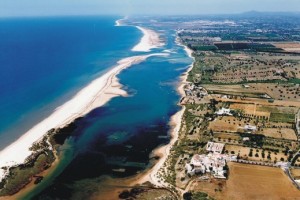 -by layers of archeology and history, buried in aeolian sand, stories of blood, survival and love, there be any more management?
-the wild fig trees of India, that acarreiam us to the Maghreb desert;
-by Renaissance church porch, of Pilarte, with side pilasters adorned with axes, frowns, tridents, Heads of Angel, bows and quivers and embossed busts of St. Peter and St. Paul;
-peeling or lagoon area between nose Cacela, Miocénica, and the hem of the dunes; Here is what I like to wander, only, or playing with my daughter, through nurseries seafood, of auscultation, attention with the slow glide of ligueirões and cockles, which leave an indelible trace on silty mud wet, and whosoever dark green, organic, of sea flora;
-the square, opposite the entrance to the fortress, with panorama to Isla Cristina and where I like to rest / living / sleeping, the shadow of these five palm Canarian; and zephyr here becomes a blessing, a warm breeze, within the summer in the western Algarve, perhaps having to travel as little, and be abated; how close the Mons Zephyrus (***)!
-I have the name for the ancient Muslim town (Castella) and here I feel at home;
-for traditional architecture, consisting of homes land, many with terraces, with parapets, chimneys, quadrangular base and pyramidal termination, tears in cunhais, Algarve with almost every decor;
-by mud walls, built in the sixteenth and seventeenth centuries, a rarity that only found in the castle Paderne (*) and in rare sections of the castle of Silves (***)- the mud was a mortar land, water, lime and sand which was much used by Islamic peoples in this region, and today is still used by those people in distant regions of the East and North Africa; today in Cacela rural buildings can still see mud mortar;
-by striking interior combination, we get here, and for which, the eight pillars, that support us and advocate, Here are highlighted and interwoven;
-for being here, we understand, as we are with Fernando Pessoa - we are many, everywhere, As a, and not be afraid to say so - "The struggle itself to achieve the heights just to fill a man's heart. One must imagine Sisyphus happy. "1
-by nights, ao luar, sometimes only, other times Salons, these magnificent Algarve nights here echoes the vibrant silence of the night, Animal and marine and air sound;

-other times at the Blue Bar with its cold teas, Tart or sweet fig, carob and almond so blissful delight;
– by beach paradise Factory, we have to cross the lagoon, sometimes walk, other times by boat, still others swim (occurred only once) and it is here that I wish to one day get me and forget everything and be Meursault; "Melancholy accompanies all greatness" as I will swim to the best of my fatigue, until the ultimate liberdade.2
And again the poet Cacela, DARRAG IBN Al-QASTALII(958-1030)
"When dawn arrives, sleeps and saves as avaricious your perfume.
When the Night Falls, it spreads and it exudes ".
1-Snub, Albert. The Myth of Sisyphus, essay on the absurd. Lisbon, Books of Brazil.
2-Snub, Albert. Happy Death (1971). Books of Brazil