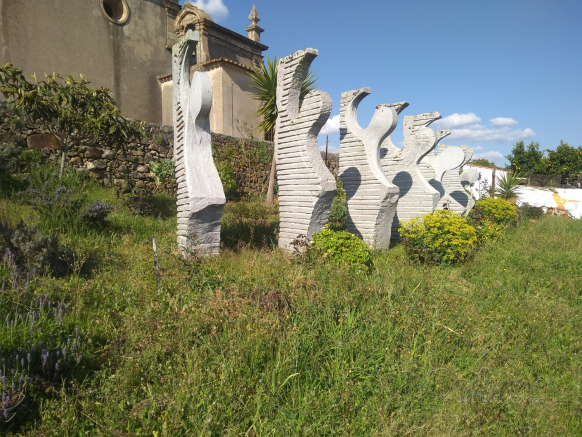 Para além do belo Castle rental operator Tagus (**) there is another significant work of art here that values ​​the municipality of Nisa. We speak of Calvary Chapel, which is classified as a Public Interest and has therein an original work of art in Portugal.
Overlooking the Alder Tagus with its remarkable castle (**) (locality from 1332 belonging to the Order of the Hospital) a Chapel Calvary has a distinct location on the deployment, thus complying with the premises of its invocation.
The temple that exists today is not the original, because there is news of another, collapsed in the early eighteenth century, to give rise to the existing. This was built in 1740, because it has on the card of the entrance door the reference to the date and the patron: This church sent to Pedro Vaz Boiler. Year 1740.
The Mannerist-Baroque architecture of Calvary Chapel
Single nave, a Calvary Chapel of Amieira has a flatness and dimensions, anomalous for these temples.
In its baroque and classical style, and due to its partial clearance, still reminiscent of the Mannerist monuments of strong Italianizing matrix of the Convent of Mafra.

Nas fachadas laterais, the set of glasses that directly illuminate the ship is highlighted ”1.
The entire set radiates a serene harmony well integrated in the landscape.
Is this the only baroque altarpiece of granite in Portugal?
But what makes the chapel of Calvary can be part of Portugal Remarkable, it is, not only ship inside, that magnificent altarpiece of granite carved to imitate wood, that does not lack the usual columns vigorously worked, in number three with a backdrop, the sky with padded stone irregularly to imitate clouds. Closed shell the only Baroque altarpiece stone in Portugal. The framework serves as the scenic backdrop to a beautiful Christ crucified on wooden, existing at the time of construction of the chapel, with Mary and Mary Magdalene, size smaller and executed by another author, the enlevar Look for the being that suffers and dies.

The Jans invisible magic guarantors of Amieira do Tejo

The intangible heritage of Amieira do Tejo translates into the legend of the Jans, linen weaving fairies. The truth is that in the oldest houses in the village the old clothes and sheets were made of linen so fine that it was said to be woven by fairies, a fairies who visited the houses at night, the ladies leaving a cake to bake in the chimneys and next to it the linen they wanted to be decided by the Jans. The next morning the cake would have disappeared and the linen was already spun, woven and woven into fine works. Legend has it that these linen pieces could not be used to go to church. Also for the passage of the deceased body of Queen Santa Isabel, who will have crossed the river using the Amieira do Tejo ferries, the Jans wove a fine tunic for their final trip to Coimbra!”

2- Here is a beautiful travel blog by Miguel Antunes and the photograph of the Jans is taken from it.

3- The altarpiece photograph is by Domingos Belo.

A comment Calvary Chapel rental operator in the Tagus (Nisa) (*)- Known in Portugal any more baroque carvings in stone?