The medieval old town of Ansiães the remaining walls and romantic ruins has a dual grand granite stone defensive structure.
The outer wall of Ansiães
The outer wall of the village of Ansiães has an upper extension 600 yards and three square towers. something stroke in winding giving a large internal space but with a very irregular perimeter.
This plant emerges a general urban organization based on two structural axes that accompany the route of the cardinal points. A first axis internal connection starts to North, at the door of S. Francisco and heads to South, culminating in the port Power Vedra.
The second, part of the Village Gate, a Oriente, and is the culmination of the other extreme western, at the door of St. John the Baptist. From these structural lines run after small streets, alleys and streets that organize the intricate urban fabric. 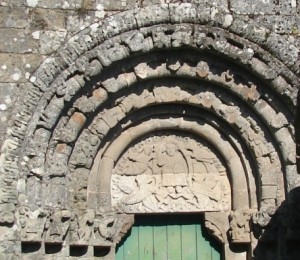 This spatial organization, underscores the leading position in the church of S. Salvador Ansiães which is one of the most beautiful Romanesque churches of Tras-os-Montes and perhaps Portugal and which stands imposingly in the highest part of the living area- but there will gentlemen. The temple is surrounded by a wide integrating a medieval necropolis.
Internal wall of Ansiães
The southeastern opens the door to S. Salvador to the church with the same name that allows access to the interior of the enclosure through a path that connects directly to the keep. This porta, with round arch, is flanked by two towers that are part of the complex structure of this first wall, constituting the single point of access to the interior of the redoubt where the centered “infrastructure” vital populated, as in the case of a deep tank with large capacity for storing water.
In the higher elevation of this hill organized a first configuration platform roughly oval, which is defined from the trace of a small wall that is reinforced for five quadrangular towers.
The church of San Salvador Ansiães (**)
But more amazing is this Romanesque church of San Salvador Ansiães with exceptional Romanesque sculpture by its iconographic symbolism.
Other Romanesque buildings remain in the district of Bragança, who are outstanding and they deserve the respect and business of all lovers of European Romanesque and are:
-Romanesque church of Santa Maria Azinhoso (Mogadouro) (**)
-Romanesque church of Algosinho (Mogadouro) (**)
-Romanesque church of Adeganha (Mirandela) (**)
-Head of the Church of Castro Avelães (Bragança) (*)
-Domus Municipalis of Bragança (***)
"The church invoking the S. Savior, Carrazeda Ansiães, is a witness of exceptional value of the Romanesque northeastern. Stands out for its proportions, harmony and sculptural decoration. The architecture of the church denotes a great conceptual quality, not knowing, however, responsible risk and realization of the work. A Igreja, of planed granite stone, stands at the door of the castle, not knowing, em rigor, the date of its foundation. The stylistic affiliation temple in Romanesque art does not mean that is no later, given the attachment that persisted in Northern Portugal this current stylistic. By tombstones found in yard, letters as weapons and military Command recorded, it is plausible to accept that here lie buried the knights who fought Castile, unwound in a battle near a brook, and greatly contributed to the victory Sampaio, lords of the village of Ansiães. The facade of the church is marked by dependence on medieval ruins, possibly the priest's house, abutting the elevation at the right angle. "1
The reader knows what a Pantocrator?
The church of San Salvador Ansiães have on your main portal, ie in your eardrum, a single object, about “Pantocrator Doomsday” that is, a“Christ in Majesty” which is one of the nicest in the country.
A Pantocrator is usually placed on the tympanum of a Romanesque temple, acolitado for evangelists, Prophets, Saints and alluding to the frequent punishment figurations and soul salvation with bearded frequency, fair but frightening, clearly dominating the majestic central-scale- scenes framed, looking to take the right path believers that contemplated by the example of the verb revealed through iconographic program but also by the fear that his vision raises.
In place of Christ emerges, sometimes with the same theophanic-meaning manifestation of God- Agnus Dei or the Mystic Lamb symbolizes Christ's Passion, slain for the salvation of men.
We know 5 Pantocratores in Portugal: Church of Saint Peter of Rates (Póvoa do Varzim) (***), Church of San Salvador de Bravães (Bridge Barge) (***), Church of St. Christopher Mau river (***) (Vila do Conde), church of San Pedro de Rubiães (Paredes de Coura) (**) and this Pantocrator of Ansiães
The Pantocrator surrounded by Ansiães tetramorfo with the symbols of the evangelists in the correct positions hierarchically, with the angel of St. Matthew and the eagle above the bull of St. Luke and St. Mark Lion, Sejas entities or winged on the ground.
A rare beardless Christ is seated with his left hand holding a book on her left leg and right hand in blessing.
Na last aduela do sul onde side is esculpiu, a considerably larger scale than the other figures, the figure of Moses with the tablets of the Law the first step in the salvation of mankind.
By its ornamentation, is considered a portal exception. Involve extensive range Archivolts decorative themes: fitomórficas, Outgoing perfis, symbolic, anthropomorphic figures, zoomórficas, etc..
In the second arch interior, appear-represented in S. Pedro, S. Paul and seven figures: a sporting books and another a small monkey. The following Archivolts show us various types of animals and distorted human heads, a mermaid ...
To make it even more mysterious portal, recorded this appears a large number of acronyms. These are repeated on the walls of the church, some being of great beauty.
The magnificent church with their capitals in lavishly decorated with medieval symbolic imaginary is really admirable and we are here to build multiple pages to meditate on the meaning of all this set.
The side facades are animated by the eaves and cantilevers single and two doors also excellently ornamented.
But the Romanesque does not end here, since before we get to line walls can find here the simple church of St John the Baptist, whose origin is lost in time and with a portal that strangely does not back West, perhaps due to a further restructuring.

The Panorama of the Castle Ansiães (*)

The view that is harvested from the walls surrounding set on broadness impresses.
With the plateau Trás here to cede to the deep valleys of the Douro and Tua are seen the old villages Selores and Washer. To the north of Douro River, discover the lines of relief that allow sighting territories of São João da Pesqueira, Penedono and even if you can spot the castle-Numão (**), the Old castle town of Ash Numão (**) and it seems to unfold Historical Village of Marialva (***). All this set is a haunting and one of the most remarkable places in the UK Wonderful Transmontano.
1-Text taken from Infopedia.
2-Recomendo vivamente ea leitura doen terrein dedicado oa Conjunto patrimoniale de Ansiães