Castelo Bom (Almeida) (*)- the village that was never classified as narrowly Historical Village of Portugal, but it is nonetheless true and beautiful

"Come see a piece of history of Portugal and inlaid granite peninsula in the high Beira Interior. A lost village where you can find a story in every corner, a testimony of the past, a mark of time or culture of these people. A village with more than 3000 years, where we find secular sources, monuments of religious nature as the chapels, niches or ordeal, tombs antropomórficos.Conhecer friendly people and enjoy a great peace in the sights of the valley Coa pzirzr with an eagle up high or swallows over our heads.
The toponymic history Castelo Bom is closely linked to its presence in a key strategic point in the territorial delimitation of the ancient kingdoms of Leon and Portugal and its historical significance to allow control over the land to the AOC towering river. So the Leonese monarchs repovoadores seeing its good location facing the river took him his appointment of a castle with excellent geographic situation, a good castle to defend the territory. "1
The village of Castelo Bom was almost classified as Historical Village of Portugal
Anyone traveling the A25, already close to the border of Vilar Formoso, repairing a village based on a small hill. This is a small town with historical traces and was chosen in the late 90 for Historical Village with nine other locations. However, on the eve of the program to be announced, was replaced by Village Piodão (**). What will have happened? Ask our current President.
Did not get the money for this program, but managed it in other ways and in some ways be reclassified, although sometimes incongruously.
Near the city a magnificent bronze sword with age was found between (1600-1200 aC). It will be that Castelo Bom was a Bronze Age settlement? The doubt can be dispelled with future studies. 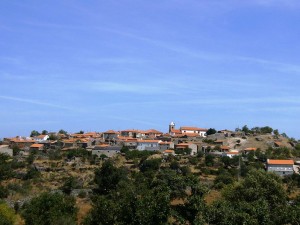 To occupy an important strategic position on the River Coa, must have had a continuous occupation. Now for the Portuguese crown is known as a dowry of Queen St. in 1282.
Dom Dinis (re)build your castle and gave it a charter. Fortunate King ordered new works and reformed his charter. During the war of independence was important as defensive core. It's beautiful drawing of Duarte de Armas showing two lines of walls, the citadel, to keep and two towers of square plants.
And today what Castle is Good ?
It is a small village, nestled in a beautiful landscape, with many details worthy of note; Deserted in the harsh winter steppe border and occupied in the scorching summer.
Worth a stroll Castelo Bom with the remnants of his castle dismantled: sections of wall, the gate of the city, a tower in ruins, a bela cisterna (the "pit of the king"), an ammunition, guard shack and two wells. By Village are some good buildings of the sixteenth and seventeenth centuries and borders porches dwellings. The buildings of the citadel, almost, built better equipped granite, have been repaired by their owners with some care. The views are comprehensive and the air is invigorating. 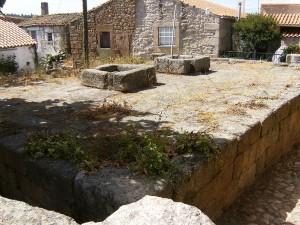 It is a beautiful village which merits further studies and extensive tourist disclosure.
My well-there to Sir Henry, My cicerone, that at the end of the visit welcomed me into their home to merendarmos, wine, rye bread, very delicious ham and cheese Idanha.
Note: Castelo Bom has a great popularizer represented in the Internet where I transcribed the first two paragraphs. Also Wikipedia has a good article on Castelo Bom and here also removed the second picture because when I visited without batteries for the camera.
The links in question are:
http://www.castelobom.com
http://pt.wikipedia.org/wiki/Castelo_Bom

A comment Castelo Bom (Almeida) (*)- the village that was never classified as narrowly Historical Village of Portugal, but it is nonetheless true and beautiful