Continuing to wander hospitable land with the support of the House of Covão Abitureira discovered this beautiful Castle rental operator founded in the fourteenth century by D. Brother Álvaro Gonçalves Pereira, Prior of the Order of the Hospital, bastard son of the Bishop D. Gonçalo Pereira, and father of the future Constable, D. Nuno Alvares Pereira, to serve as a defense line of the Tagus.
Notice that the Castle alder Tagus was built, halfway between the Castle Belvis e o Monastery Flower Rose (**) one of the eleven villages that the Knights Hospitaller (Lands of Guinditesta) held in the region.
The castle rental operator is one of the best Gothic castles in Portugal
In the context of struggles for Christian reconquest of the Iberian peninsula and the formation of the kingdom of Portugal, o rei D. Sancho II (1223-1248) made a significant donation of land to the Order of the Hospital of St. John of Jerusalem, including the villages of Amieira, Beastr (Sparrow-hawk) and Crato (1232).
The Castle rental operator was built under the reign of Afonso IV (1325-1357). Its construction is attributed to Álvaro Gonçalves Pereira, was completed by his son, D. Pedro Pereira, who inherited the Priory, in 1362. The castle until the sixteenth century had a residential function to the Prior of Crato.
During the Crisis 1383-1385, the then Prior of Hospital, D. Pedro Pereira, early 1384 recognized the authority of D. Beatriz, daughter of D. Fernando, and, as such, legitimate heir to the Portuguese throne. The Castle of alder, Order together with the other, rendered obedience to the Queen, situation changed a few months later, influence by the Constable D. Nuno Alvares Pereira, Prior brother, taking this game to Castile. 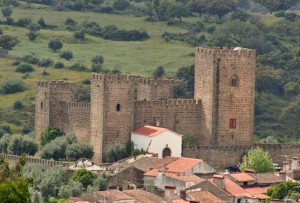 The only military episode in which the castle was involved occurred in 1440. Having D. Leonor de Aragão, quarreled with infant D. Pedro, retirou-se, with the complicity of the prior, D. Nuno de Gois, to crate, having relied to his aid the forces of Castile, surrounding the rental operator. Given this insubordination, D. Peter ordered the occupation of the castles of the Priory Hospital in this border region, ordering the D. Álvaro Vaz de Almada, count of Abranches, affect the Castle Amieira. Without resistance castles surrendered, the Prior of Crato and D. Leonor put to flight to Castile and peace was restored.
In the following centuries, minor modernization works were preceded under the reign of D. João II (1481-1495) and D. Manuel I (1495-1521).
Located in downtown area, surrounded by town, after the sixteenth century the castle Amieira, function without war entered into abandonment and degradation. It is known that in 1846 was installed inside the castle the village cemetery. In the XX and XXI centuries the castle has been restored and is very well maintained.
Features of the castle of alder Tejo
With plant in rectangular shape, is considered one of the finest Gothic castles Portuguese.
The walls, ameadas, the corners are strengthened by four solid towers and the Tower of Homage, Larger proportions, as quadrangular, defending the gate barbican. This tower has windows, being a semi-detached and one with Gothic arch. No inside, opens the parade ground. At its center is a well-preserved fifteenth century cistern, replacing other older. No outdoor, The assembly is completed by gap (Today grounded) and a barbican wall of quadrangular, the castellated walls.
The Chapel of St. John the Baptist in Amieira Tagus
Outside the walls, addorsed but one of the towers, stands the Chapel of St. John the Baptist gate with round arch with padded staves. No inside, features coffered dome decorated by graffiti grotesque Mannerist inspiration, with plant motifs, fantastic animals, Geometric, anthropomorphic and hybrid, dated 1566.
Two more reasons for interest in Amieira Tagus
Alder Tagus has two interesting features that can not miss: Ride to the River Tagus to the place of Boats of alder (*) e a chapel Calvary (*) who has a rare baroque altarpiece, built not of wood, as everyone in Portugal, but granite, I do not know another equal, and the reader knows?
Adapted slightly from Wikipedia. Congratulations to the author.