The castle of Amieira do Tejo was once a relevant military stronghold and an urban center of considerable importance, since it had a port on the Tagus River that connected the Alto Alentejo to Beira Baixa by ferry.

The castle of Amieira do Tejo, is part of the Tagus River defense line with its various forts and which are: the Castles of Belver or Almourol or the watch towers of Cardigo or King Wamba, this at Portas de Rodão.

Founded not reign of D. Afonso IV (1325-1357), its construction is attributed to Álvaro Gonçalves Pereira, Prior of the Order of the Hospital, and father of the future Constable, D. Nuno Álvares Pereira and is a unique case in the panorama of Portuguese military architecture for its exemplar, regularity of your layout (being one of the castles with practically regular plant) and its location, right in the middle of the village and at a not elevated point.

The foundation of the castle

The construction of the Amieira do Tejo castle is linked to the history of the Hospital Order in Portugal and to the donation of 1194, por D. Sancho I, of Herdade de Guidimtesta, that spanned a vast territory, whose limits comprised, the towns of Sertã, Pedrógão Pequeno, Oleiros, Belver (that didn't exist yet), north of the Tagus and, a sul, those of Gavião, Toulouse and the site of Amieira, which later expanded to Crato. Despite this Order's primary assistance vocation, contrary to the markedly military propensity of the Templars, the displacement of hospital workers to the south and their participation in the conquest of Silves, in 1189, seems to signal a turning point in this trend and the donation of Herdade de Guidimtesta by D. Sancho I, with the express mention of building a castle there (of Belver) notes the royal concerns in the defense and settlement of the territory.

The responsibility for building a castle in the territory of Amieira - whose strategic value, due to the proximity of the Tagus and the fact that it is an important crossing point, it is more evident - it is up to the prior of the Order of Hospitallers, Álvaro Gonçalves Pereira, after transfer, in 1356, from the headquarters of the order of Leça do Bailio to the neighboring monastery of Flor da Rosa.

Alder Tagus, then it had a privileged location because it was just 3km from the Barca crossing port on the Tagus River. Of the special road importance of this location, it is worth mentioning the Parish Memories of 1759;, there they refer to the excellent conditions of navigability of the waters and the quality of its port of fluvial passage, of Barca da Amieira (*),for the connection it makes between Beira Baixa and Alto Alentejo and justifying the absence of accidents "[…] the miracles performed by Queen Sancta Izabel for having in the said Porto her holy body when the town of Estremos was buried in the city of Coimbra, […], the Holy Queen having died in 1336.

The importance of the Barca da Amieira as a transit area and commercial route seems to be related, at least, to the period of the foundation of the castle of Amieira do Tejo and remained, largely, until the end of the 60 20th century, time when the construction of the Fratel dam caused a sharp decrease in the commercial movement, sharp, in the years 80, for building the IP 2.

In 1359, was already Pedro Pereira, and the castle of Amieira do Tejo, between Belver and the Crato, it would thus be practically completed: square plant, equipped with four towers in the corners (message, Sanguinho, Pandeirinhos and São João Batista) assuming the functions of the keep and the residence of the mayor, with a rectangular patio and central cistern and entirely surrounded by an extensive barbican.

Adopted by the founder, Álvaro Gonçalves Pereira, father of Nuno Alvares Pereira, as a refuge during the last years of his life, the defensive capacity of the monument will not have been harshly put to the test during the coming periods. Stage of some conflicts at the time of the dynastic crisis of 1383-1385. During the Crisis 1383-1385, the then Prior of Hospital, D. Pedro Pereira, early 1384 recognized the authority of D. Beatriz, daughter of D. Fernando, and, as such, legitimate heir to the Portuguese throne. The Castle of alder, Order together with the other, rendered obedience to the Queen, situation changed a few months later, influence by the Constable D. Nuno Alvares Pereira, Prior brother, taking this game to Castile.

The only military episode in which the Amieira do Tejo castle was involved occurred in 1440. Having D. Leonor de Aragão, quarreled with infant D. Pedro, retirou-se, with the complicity of the prior, D. Nuno de Gois, to crate, having relied to his aid the forces of Castile, surrounding the rental operator. Given this insubordination, D. Peter ordered the occupation of the castles of the Priory Hospital in this border region, ordering the count of Abranches, affect the castle of Amieira do Tejo. Without resistance castles surrendered, the Prior of Crato and D. Leonor put to flight to Castile and peace was restored.
The first documented repair work dates from the time of D. João II, pursued in the following reign, time when works were carried out in 1515.

It is from the 16th century onwards that, gradually, a situation of abandonment and degradation, the result of war inactivity and lack of maintenance, situation that documentation of 1759 express, when he says that the four towers no longer have “houses or roofs and the main room between the first two towers is ruined”. It turned out to be the controversial transfer - which took place after the 1846 - from the burials of the church to the interior of the castle enclosure, that ensured some care in maintaining that space. By then the castle would be out of the habitations that occupied it for many years, and that would be semi-destroyed.

At the dawn of the 20th century, the Castle of Amieira, deprived of the noblest buildings that adorned it once and occupied by “housing huts, stables and pigsties”Was, like many of its counterparts all over the country, voted for abandonment - despite the robustness of its main walls, that remained intact - it was used as a corral and shelter for pastors and the central courtyard had been transformed into a cemetery. This state of neglect does not prevent, in 1922, be classified as a National Monument, being in that capacity that receives, in 1950, extensive restoration works under the responsibility of the Directorate-General for National Buildings and Monuments. Before, however, in 1933, on the initiative of a local benefactor, the four towers had already been restored.

The works carried out had a demolition component (removal of burials and walls from the cemetery, topple the buildings that occupied the land between the barbican and the wall and the outer buildings attached to the barbican), in a clear concern to return the monument to its origins and its dignity. The barbican was rebuilt, maintaining the lines of your stroke, as well as the reconstitution of the adarve and the execution of floors, roofs and interior stairs to access the four towers.

Recently works were carried out centered on the keep with the possibility of its use for exhibitions. 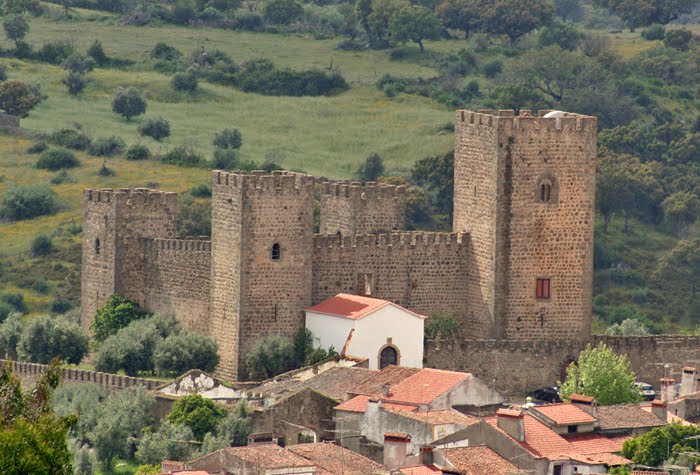 castle of Amieira do Tejo

In the case of Torre do Sanguinho, the wall coverings are semi-covered by a lime “film” applied afterwards, making it difficult to read; the same is not true in the so-called Torre dos Pandeirinhos, whose designation derives precisely from the pictorial representation of two geometric figures associated with timbrels or tambourines. It also has “fake” decorations, the ornamentation / protection of joints, and it is still evident today in several of the masonry facings and in a thin line made with an incision instrument, a bird, a rider and a barge, among other reasons of difficult interpretation and worse reading.

The entire walls of Torre do Sanguinho, is graffiti from the level of the current graffiti floor to the roof. See the figure, sharp, of a knight, an ordeal (?), bearded or young figures (?) crosses and spears (??) and still, next to one of the dogs on the roof, traces of an inscription, for now unreadable.

These paintings are prior to the 16th century; for this hypothesis, both the analysis of the finishing plasters of the interior of the towers converge - of high quality and which may be contemporary with Olivença, dated by an inscription made by the artist himself, of 1332) and the figure of the “knight” who points, proportions and clothing, for a medieval affiliation.

The wonderful Chapel of São João Baptista, erected in the east of the beard dated by 1566, translates the well-known devotion of order to this saint and the decay of the castle's defensive functions.

The work in writing deserves to be highlighted, in black and white, that covers the entire vault of the nave of the Chapel of São João Baptista due to the extension and originality of its decorative program, since it is the application of a technique that we most often encounter, in our country, in decorating small surfaces like friezes, spans or corners of buildings.

The model for this work resides in the coverage of the main chapel of the main church of Crato, performed according to the same technique.

The erudite chapel of S. João Baptista of the Castle of Amieira do Tejo presents a very simple interior, with a rectangular plant.The decorative program of its cannon vault is very beautiful, with twelve boxes, filled by grotesque mannerists, with plant motifs, fantastic animals, Geometric, anthropomorphic and hybrid and where male sex organs are not lacking. In the figure in the center, circled, a woman is represented and surrounded by penis. How did this image escape the censorship of the Catholic Church?

Two more reasons for interest in Amieira Tagus
Alder Tagus has two interesting features that can not miss: Go to the Tagus River to the place of Boats of alder (*) and to chapel Calvary (*) who has a rare baroque altarpiece, built not of wood, but granite.