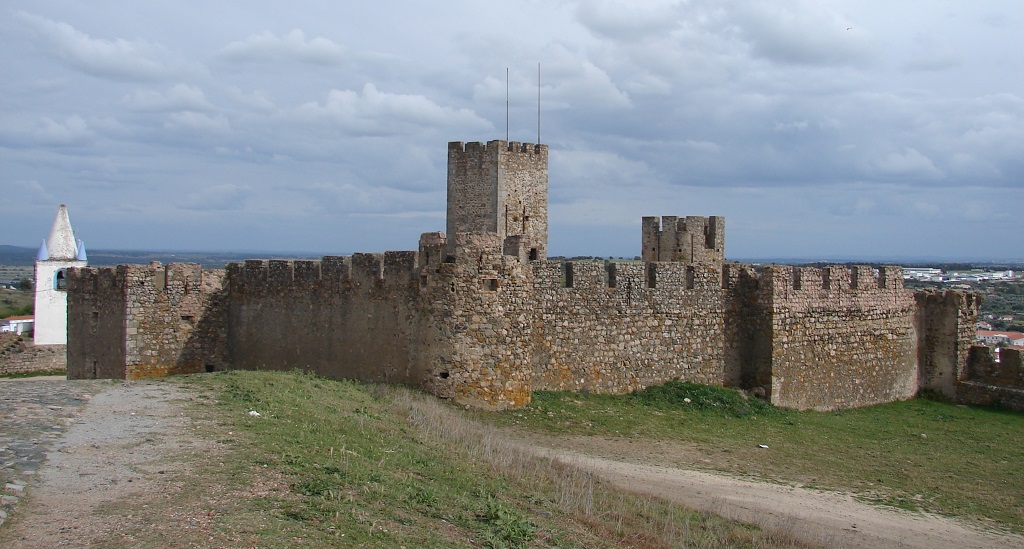 "Travel makes a modest person - one sees how small the place we occupy in the world." (Gustave Flaubert). This phrase so felt the celebrated author of Madame Bovary, can also be felt at the top of the Castle of Arraiolos, with this great landscape, green, serena, almost arrogantly good before so much uncertainty in this world always so hostile. I was here three times, never alone, always in family. The early human occupation of the rocky hill, where it implants the Arraiolos Castle known as Mount St. Peter, north of Arraiolos, is confirmed by some quartz firing pins and prehistoric copper ax, found during archaeological exploration in the castle fortress, in currently Museum of Évora. 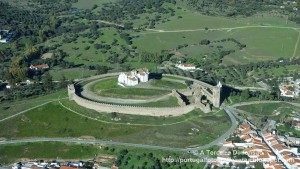 The whole walled enclosure crenellated Arraiolos was built between 1306 and 1310, at the behest of King Dinis, it was not just a poet king or peasant, as the people remember. The Arraiolos Castle has elliptical plant, and I know of another case so round taking advantage of the very regular form of the granite hill where is. It is open two doors: the destroyed Porta of Vila (or the Barbican), a On, today reduced to a large opening in the wall), Tower à together Menagem, and the Santarém port, Northwestern, Gothic, flanked by torreões dois.

Contrary to what is common in the Alentejo Gothic fortification, the castle of Arraiolos has square section turrets and not semicircular. Several times restored the wall of the castle of Arraiolos, it conserved the Clock Tower of the Manueline period with its spire.
The landscape of the Castle of Arraiolos
The wall is the battlement, almost all circulável, allowing the visitor to enjoy a vast surroundings. The highest point, one can see Évora, Monsaraz, Round, Evoramonte, Vimieiro, Estremoz, Alter do Chão, Vide, Border, Notice, Pavia, Eagles, Till and Montemor-o-Novo. Oh what a wonderful view of this magical plain. Oh, and do Arraiolos which is the spine of South hill. Despite the apparent platitude, are visible alignments that separate different slopes failed, as seen in the North St. Gregory and in Aldeia da Serra, contribute to a great geological wealth of the region (that can be seen here). 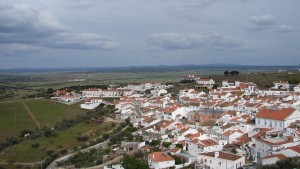 As a curious note should be noted that in Clock Tower today the bells are used to announce the hours, being whitewashed annually, according to regional traditions, in other words, in the hot season and the colors applied in vernacular architecture, although there are no references to this appearance as the original. The Palace of the Castle of Arraiolos Built around the same time the wall, has rectangular plan with angled defense towers. In addition to the keep, were part of old-castle-palace's quarters mayor, the house of the Guard and the Patio de Armas. All indoor buildings are now reduced to foundations. 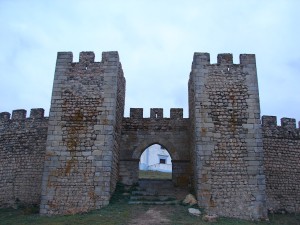 Dom Nuno Alvares Pereira-noble inhabitant of the castle of Arraiolos After the outcome of the crisis 1383-1385, areas of the town and its castle were donated to Constable D. Nuno Alvares Pereira (1387), awarded the title of Count of Arraiolos. So Dom Nuno Alvares Pereira, Second Earl Arraiolos, front-mor Alentejo and Constable of Portugal spent several seasons here. The Arraiolos Castle is part of the fortifications Campaign D time. Dinis in Alto Alentejo and is part of the duchy of territorial network of Bragança, being located in the vicinity of the same house other castles, as Evoramonte (***) and Vila Viçosa (**). The castle fell into disrepair although sometimes a monarch, try to restore the importance of it. As macabre curiosity in the nineteenth century, your Patio de Armas served as a cemetery for victims of Cholera morbus in the region (1833). In the early twentieth century was a National Monument. In the period from 1959 a 1963, the castle and the walls of Arraiolos, were partially restored by Directorate General for National Buildings and Monuments (DGEMN).

A local tradition says that there is a secret underground passage connecting the castle to Convent of Our Lady of the Assumption (Convent Lóios).
Church of San Salvador Early Village matrix, already existed in the year year 1271, before the castle; was heavily modified in the sixteenth century and the mid-eighteenth century. Benefited from protection of the Dukes of Bragança, lords of Arraiolos village for centuries. Church has contrafortada ship ribbed vault of the Gothic-style end of Manueline. The side chapel on the Gospel side is dedicated to the Blessed Nuno de Santa Maria (Dom Nuno Alvares Pereira). The altarpiece of the main altar, dedicated to Our Lady of Conception, is golden eighteenth century rococo carving.

Additional References: Text adapted from here, again the wikipedia is a good counselor

Altarpiece of the main chapel of the Church array Escalhão (Figueira de Castelo Rodrigo) (*)-Did you know ... here an unusual Christ observes his twin brother on the way to Calvary?