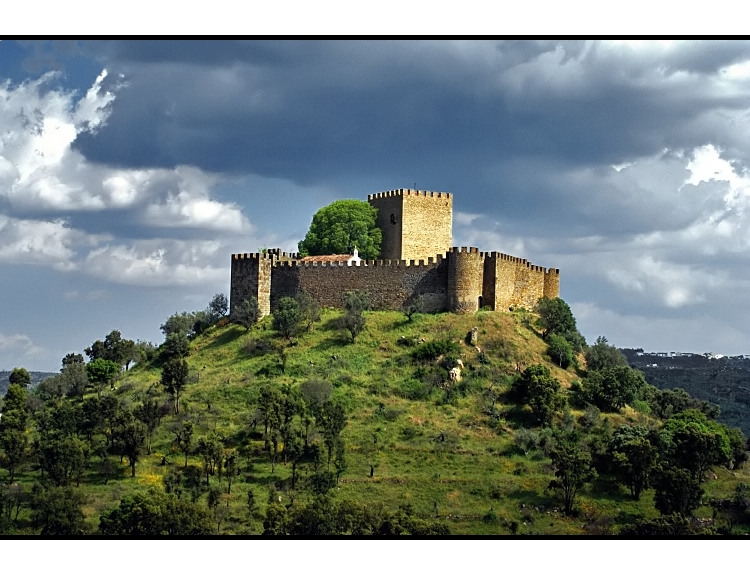 The Castle Belvis, situated on the right bank of the Tagus river, num granite conical hill of steep slopes, is one of the perfect Romanesque castles Portugal and the 5 remarkable monuments of Knights of Malta (do Hospital) in our territory. The site was important in the defense of our country in the fight against the Muslims for control and monitor across the Tagus. Strategically built with vast domain in the landscape, is easily defended by the northern slopes, west and south due to its steep; access to Castle Belvis is done by rising hillside where he graduated Location.
In 1191 al-Mansur, with your Almohad army made several devastating raids into Christian lands and the valley of the Tagus became, again, within a border, saving yourself Evora Christian enclave: North dominated the Christian forces, South Muslim forces.
Dom Sancho I then appealed the orders-religious warriors to defend your territory and increase.
In 1194 Dom Sancho I donated an extensive Guindintesta Earth called the North and South of the Tagus to the Order of the Hospital. This was asked to defend and populate the region, thus seeking to consolidate the Christian rule in the region.
The king also gives instructions for it to be built a castle called Belver, name is a reference to the legendary castle Belvoir, the Hospitaller order situated in the kingdom of Jerusalem. The beautiful village of Belver was born that way because of the protection and support of Belver Castle..
Before the completion of its construction, in 1210, D. Sancho I, by will, leaves the custody of the Prior of the Order of the Hospital, no Castle Belver, an important part of the treasure consisting of 500.000 maravedis of gold and 1.400 silver marks for that order, thus demonstrating that the Castle was almost completed. Is not it strange, In order to be here real fortune, given the proximity of the enemy?

Castle Belvis is renewed by Nuno Alvares Pereira Sun
"After the final conquest of the Algarve, castles Line Tagus lose much of its military. However, consolidation of the Avis dynasty, five years after the Battle of Aljubarrota, the Castle Belver takes its value in the context of the defense of the realm, so are benefited with restoration and expansion directed by D. Nuno Alvares Pereira. However, due to the peace treaty with Castile in 1411, it was not the scene of any military action".

The Infant of Seven Games and dominates near Castle Belvis
In 1440, Castle Belver saw itself involved in the struggle between D. Leonor and Regent D. Pedro. The people of Belver side with the Dowager Queen and are surrounded and taken over by Álvaro Vaz de Almada. valid king D. Pedro, then 1st Count of Avranches.

During the century. XVI castle have served prison for Luís de Camões but also as a noble residence for the Princess Saint Joan, sister of King João II, have lived in this castle some years (need to check).
In the sixteenth century, the Belverenses and its Mayor shall have opposite Philippine field putting themselves next to the D. Antonio, Prior of Crato.
Belver Castle then enters a period of degradation and ruin to which the Earthquake in 1755 which caused serious damage to the walls and the dungeon. Between 1846 and 1948 SERVIU of cemitério Vila. In 1909 a strong jolt of land degraded even more space and a decadent broken. Ends this troubled phase in the early 40 this century with deep renovation work ".

The structure of the Castle Belver
Six towers and parapet the whole run, mark the wall of the dilapidated castle, this, Oval, cautiously attenuates the angles.
Notice the friend in the eleven loopholes that flank the main door cubelo, splitting of access and preventing the approach of any enemies. This construction is unique in Portuguese medieval military architecture..
A sul, ripping the front door flanked by two turrets. The access road to the castle is indicative of the military strategies of the friars-S Knights. John's Hospital, because by finishing “elbow”, not allowed to form clumps and obliged row not making the assault.
No inside, stood the ancient fortress, of which only a few walls remain, The tank and the chapel of S. Bras.
The parade ground houses the keep with a rectangular plan and 22 feet tall and dungeon; Inside there is a small museum with some archaeological finds from the parish and the history of the castle itself.. The tower in the center isolated estava, which is typical of Romanesque castles, and was served by a mobile ladder, it was withdrawn in danger.
The door of betrayal is discreetly hidden in the wall band west by a semicircular tower and a bounce of the wall itself which is naturally protected from outside access by steep and rocky hillside.
Also on the west side of the perimeter of the tank found two round mouths, these dates back to the time of Dom Nuno Álvares Pereira. A sul, opposite the main door of the castle, found the ruins of buildings alcaidaria and trim.
The castle, despite some changes over the centuries, remained largely intact the original structure, considering one of the most representative of the Romanesque period of military architecture in our country.
The Chapel of St. Blaise Castle in Belver
"It should be noted that there, within its perimeter, of the Chapel of São Brás, dating from the sixteenth century, with Renaissance features of transition to Mannerism, with a pre-baroque altarpiece carved in 16th-century carving, during twenty four niches for housing busts and arms Santos, where the Sacred Relics that had been brought by the friars of the Order from Palestine were displayed.”

The altarpiece will have been offered to the chapel by Infante D. Louis, son of D. Manuel, and Prior of Crato between 1527 and 1555. Crato Priory, head of the Hospital Order (called the Order of Malta from the 16th century onwards) in Portugal, held Belver's jurisdiction since the donation of D.. Sancho I, in 1194, and its castle became the seat of the Order until 1350, year of transfer to Crato.
in the altarpiece, the curious presence of the pig at the feet of São Brás perhaps evokes the episode in which the saint convinces a wolf to release the bramble he had captured, belonging to a peasant. It should also be noted that in several regions the tradition of slaughtering the pig is linked to the devotion to São Brás, asking the saint for protection for the conservation of the smokehouse, or by giving yourself a small contribution., fruit of the kill, to your party.

Feast in Honor of the Holy Relics in Belver

“In Belver there is a feast in honor of the Holy Relics. This is because in one of the altars of the Church of Belver there is an ark with the said. To dignify them, the annual land festival is held. They are relics said to have come from the Holy Land.

The relics were handed over to the Grand Prior of the Order of Malta who 'collected' them., the same ones found in the ark of the Parish Church.

"And the relics are the ring of São Brás who was bishop, Mary Magdalene hair, little straws from the baby Jesus' manger, bones… that is, what the imagination of the Middle Ages created around the relics and the business” that involved the Holy Relics throughout the Christian world, explains Professor Carlos Grácio.

Another legend then reports that the Holy Relics were deposited in this Chapel, by Infant D. Louis (son of king D. Manuel I), place where they were stolen.

The entire altarpiece is composed of small sculptures that have a hole in the chest and most do not have hands., precisely to guard the set of relics said to have been brought from the Holy Land by the Hospitaller Knights.

The cult of the Holy Relics is a phenomenon of popular religiosity rooted in the population of Belver.” (1)

Belver Castle is a Viewpoint exceptional
The castle has wonderful views, Tagus snaky, a the river beach Alamal (*) and the passageways of Alamal, Dam Belver and the houses of the village; usual see themselves osprey dive into the Tagus

Image credit: The great photograph is by José Branco published on the website Looks

Notes: o texto, between blades, is written by Luís Filipe Dias and slightly modified by us.

Outstanding Accommodation, Regions of Portugal, Distrito-Portalegre, Spain to Portuguese, Olivenza, Other topics, All articles
3 from April to 201022 de May de 2010