“Archaeological research indicates that the early human occupation of the hill of Castro Marim Castle dates from the late Bronze Age. Since then there was no stopping the occupation of the mouth of the Guadiana River, always linked the commercial maritime, successively by Phoenicians browsers, Greeks 1 and Cartagineses (late fourth century B.C.) to be destroyed by a strong earthquake before the arrival of the Romans.
The oldest defensive wall enclosure identified in the current castle dates back to the eighth century BC, having been added by other structures in the following centuries, particularly among the V centuries BC III, when trade with the Greek cities intensified.
At the time of the Roman invasion of the Iberian Peninsula, the Guadiana river served as the border between the provinces of Lusitania and the Betic. The village was reoccupied and rebuilt its fortifications, m turning up important political and economic center regional. It departed the busy roads that connected Baesuris 2 (Castro Marim) the Mértola (the north), to Ossonoba (Trail) e Balsa, pela coast (west) e Huelva (in Timor).
Later, maintaining its importance, was occupied by Vandals and Muslims 3, some authors attributing to the latter the building of the castle,, square, with semi-circular towers at the corners. 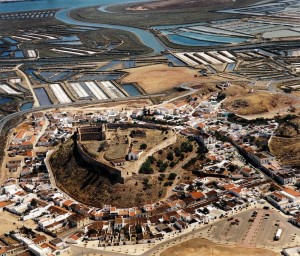 At the time of the Christian reconquest of the Iberian Peninsula, the region was hit by the Portuguese forces in the decade of 1230. D. Sancho II of Portugal reached the mouth of the Guadiana River where he won Mértola and Ayamonte (1238). The conquest of Castro Marim gave the following, under the command of the Master of the Order of Santiago, D. Palo Peres Correia (1242). From then on, Crown promoted the repopulation of the Algarve, in charge of the military orders. Castro Marim received a charter passed by D. Afonso III of Portugal em 1277, with the determination to rebuild their defense.
Under the reign of D. Dinis of Portugal (1279-1325), the reconstruction of the castle gate was initiated, as epigraphic inscription (1 July 1279). Sovereign confirms and extends the charter of the village (1 May 1282). Later, due to the negotiation and signing of the Treaty of Alcanices (12 September 1297), When Portugal withdrew domains Aroche, Ayamonte, Aracena and other, receiving in exchange the Campo Maior, Olivenza and others in the region, the ruler determined the strengthening of the castle of Castro Marim (1303) and the construction of a barbican. These structures were known respectively as "Old Castle" and "Wall (or castle) de Fora ".

Castro Marim Castle was the first headquarters of the Order of Christ
Even in the reign of this sovereign, before the expiry of the Order of the Temple, por Bula do Papa João XXII (14 March 1319), Castro Marim was donated to the newly created Order of Christ that there established its first headquarters, of 1319 a 1356 4”.
With the transfer of headquarters to take, By order of D. Pedro I of Portugal (1357-1367), the strategic importance of the town decreased, It is beginning to depopulate”.5
But even in the reign of Dom Afonso IV, the castle of Castro Marim would be attacked by "ten thousand horse and out muy gentesde other foot damage ... and Portugal was upon him a few days and by fighting and insults q` gave him to work pollar, aviation and can not because of shame in men and good Portuguese defenders, it too hard, and daring to defenderam ... "6
The Infante D. Henrique (1395-1460), appointed Master of the Order, resided in this castle. Later, under the reign of D. Manuel I (1495-1521), the village received the New Foral, moment when the sovereign ordering repair your defenses, including the castle walls. These works are recorded by Duarte de Armas in his Book of Strongholds (c. 1509). With the beginning of the Portuguese maritime expansion, the Algarve region took on new strategic importance, by its proximity to the squares North of Africa. These works met twofold: logistical support to African squares and vigilance on the action of Buccaneers, active in the region. Other squares Algarve, however, modernizaram up throughout the sixteenth century, which is not registered in Castro Marim.
During the crisis of succession 1580, rising party of the Prior of Crato, members of the Board of the UK Defence, established after the death of Cardinal D. Henrique, flee to Castro Marim, where shall Ayamonte, Spain. Or protegidos, plow and sign a statement recognizing the rights of Philip II to the throne of Portugal, proscribing D. Antonio.
With the Portuguese Restoration War of Independence, lindeira the defense of Castro Marim was remodeled, acquiring modern bulwark lines. These works will be completed only in the reign of D. Afonso VI of Portugal (1656-1667), complemented by the Fort of São Sebastião and the Forte de Santo António. Within this defensive system sent the sovereign erect a new chapel dedicated to St. Anthony in which an altar was dedicated to the martyr Saint Sebastian. 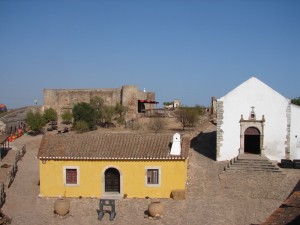 During the earthquake 1755 the medieval core of the town suffered extensive damage, particularly experienced in the Church of St. James. For this reason, D. José I. (1750-1777) determined the recovery of the defenses of the village.
In the early twentieth century, Castle Castro Marim was classified as a National Monument in 1910.
Structure of the Castro Marim Castle
In a dominant position on a hill, the medieval castle (also called Old Castle or simply castelejo) apresenta irregular quadrangular, with four cylindrical towers at the corners of the walls, tour of parapet, where two ports tear, one north and one south, one of which is surmounted by stone weapons and epigraphic inscription. Within the parade ground, buildings rise up two floors addorsed to the west and north walls; do leste side, the ruins of the primitive fortress. Externally, identify the remains of the keep and a bulwark that skirted.
Ao abrigo da barbacã, of plant triangular, traveled by adarve, rise from the Church of St. James, Church of Santa Maria, Misericordia Church and museological, with archaeological evidence of occupation of the region. In the south corner stands a platform for artillery, our fleet vertices e oeste, two towers of square plan, covered by terraces where ripping doors on arched. Surmounting the door of the west tower, a stone weapons and epigraphic inscription, time Dinis ". 5
The landscape of the castle of Castro Marim
Consider now just the beauty of the place, this expanse of water, no Vasto sapal Nele, saline resembling mirrors mosaics, shining and reflecting the light. At his side and follow the profile of the tireless marnotos, erguem up immaculate white pyramids.
The sentences flit around, let them come and go with the wind. “Time is the substance from which I am made. Time is a river which carries me in its current, but I am the river; is a tiger that devours me, but I am the tiger; is a fire that consumes me, but I am the fire.”7, Also these stones of the castle, these lagaretas that serves me to the floor parapet, esta Singel vila Luminosa, still well preserved, the mouth of the Guadiana River, the huge International Bridge, those hills and taciturn pardacentos, where senses desertification, 're mounds escalavrados pedra, those loons who flit over the marsh and the only language other birds I do not know, and dying churches, within the skeletal strength, and this chameleon, Small jump to, in prayer to disk King, and to this, done time, of helium and Hidrogênio, and to that beautiful child, as happy as if time does not count, Pure excellence in landscape; Off, runs that do not know the Gompertz Law! And this is where I believe, the fleeting happiness, Now that experiment here and the reader may also have come here.
Notes:
1-Read the Attic Ceramics Castle Castro Marim Ana Margarida Arruda.
2-Civitas any dimension since here was minted coin; this period also met altar in larário.
3- Castro Marim, would be in the Islamic period, a small fortified town with maritime functions of warehousing the ruins of fortifications of different. The square plan of the walled city of Old Castle, “corner towers with semi-cylindrical”, was already considered volumetrically due to tradition “Byzantine-emiral” (TORRES, 1997, p.440), although they seem stronger evidence of it is a coastal fortress Manueline.
4-Dinis used the argument, attacks Moors, Order to put this strategic point to preserve. Because in Castro Marim was "a very strong Castle, that the layout of the place did very defensible, on the border of said enemies ".
This fortification will thus played a key role in the outcome of the "process of the Templars" on a national and European context. Here riders disembarking numerous fugitives from France, to join the New Order of Christ.
5-Text taken entirely from wikipedia. Congratulations to the author.
6- Chronicles of Ruy de Pina.
7- Jorge Luis Borges, O Aleph, 1949

Penedo Durão: A special view of the Douro