The origin of Castle Celoria the Side is unknown, however in the seventeenth century was discovered a Roman inscription referring to the names of three captains of the time of the first Emperor Augustus Caesar.
Occupied by the Muslims, however D. Afonso Henriques conquered-or. To encourage its settlement and defense, the sovereign granted it a charter, attributing to the Knights Templar to direct the work of rebuilding the castle.
It castelo, together with the Trancoso (*) and Linhares da Beira (*), was important in the Middle Ages in defense against the Spanish invaders.
It is the case of skirmishes between Don and Sancho I King of Leon, Afonso IX. This veins surround the castle Celorico da Beira. The population of Linhares da Beira (***), for about ten miles, led by its mayor came to his defense and the dead of night, libertou a hairy Irma.
In the first spanish invasion 1385, the people of the three castles would win the historic Battle of San Marcos in 1385 Trancoso, against King John of Castile. That same year the second much more powerful invasion defeated Beira Celorico, but then lost in Aljubarrota.
The significance of the eagle and trout in Arms Celorico Beira
Count of Burgundy, future Afonso III, surrounded the castle, but the mayor had done Homage to King Sancho II and his alone receive the order to hand over the keys of the castle. Sick and demoralized, Sancho exiled in Toledo, but still the monarch and the mayor Ferdinand Rodrigues Pacheco remained faithful to the oath that only the word Sancho or death could void. 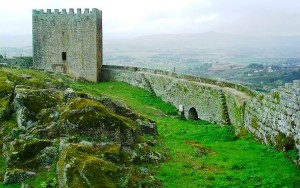 Help came from heaven, but not divine. Sides of the Mondego River an eagle flew over the castle here and let the trout delicious claws. Employment to the mayor in the best way, giving the cooked, with the remains of flour exhausted barn future Afonso III; was also a kind letter in which the mayor justified the preservative defense, adding not see usefulness in the siege because he had a good garrison in the castle and groceries were not lacking. Understand better the Earl of Bologna lift the siege and move towards Coimbra. Then faced with another mayor of the same quality, Martim de Freitas, that would only hand over the keys of the castle of Coimbra in the hands of the corpse of Dom Sancho II in Toledo. Also now we are in need of honorable Portuguese.
The structure of the Castle of Beira Celorico
The Castle Celoria the Side, which is a fine example of Romanesque and Gothic, rests on a granite hill Fragosa village and jungle around them, except the west.
Not being very broad, has a mighty wall, um long walkway, with narrow stairs to access, two gothic doors and an impressive tower, that probably would not be the keep and two turrets. In hilly yard there are traces of the keep and the tank. 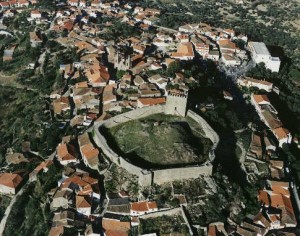 The fortress is also a good viewpoint for skirting tectonic rip the Mondego River, to the fertile pastures in the foothills of the northern boundary of the Central Cordillera Portuguese. The view is varied, being a comfort to those who appreciate and / or understand the geomorphology.
It is seen very well in Serra da Estrela (****), a Penha Prado (*) the bridge of the Laundress, well preserved Roman road and envision behind a ridge the necropolis of Saint Genes with Bell Stone(*) and pasture, Feeding the sheep responsible for the famous Serra cheese. There is the traveler to imagine the loyal Portuguese who found themselves besieged there that deserved to be honored by the visit of knowing tourist, but as yet no, because Castle Celoria the Side is finally being reclassified.