Castle, landscape and paintings on feathers Róias-Templars in northeastern

Templar foundation built by Gualdim Paes, Master of the Order, at the end of the reign of Dom Afonso Henriques, the Castle Downs Róias Fazio part of the defensive system of the Northeast Transmontano involving castles Mogadouro, Castle Algoso (***), Vimioso, that formed a defensive line against the adverse kingdom of Leon.
The castle Sentencing Róias was simple and small, with a wall and 4 turrets at angles and a slender tower with square Homage 5 meters from the side a bit bumpy, based in order to take advantage of the quartzitic basement. The dungeon, very slender and 3 homes, now just ruined sentry still serves the small village of Feathers Róias that flanks the east, small village became the county seat. The front door of the Tower is 6 meters from the ground and was accessed by a wooden staircase, amovível. In its lintel, subscribe to pattée Templar cross and epigraphic inscription from the time of its founding.

In 1509, the squire of Don Manuel I, Duarte D'Armas designed the castle Sentencing Róias with great mastery in his Book of Strongholds.
Cave paintings in Feathers Róias
The name Róias stones can be attributed to the color of the red rocks of powerful quartzite outcrop or be due to cave paintings with representation from paintings in red ocher. The Southeast Castle Downs Róias under a quartzitic, there is a set of schematic representations of human figures painted. Anthropomorphic representations show in place of the head that a ritual prop. I tried to discover the paintings but could not, maybe I lacked visual acumen for such, but will for next time, because Feathers Róias do not forget and is a place that is always around. 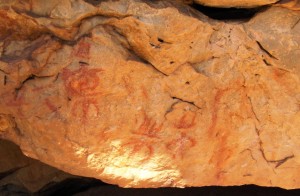 The scenery is magnificent Castle Downs Róias
Incidental opens up another fantastic place – the Castle Algoso, over the same quartz ridge that will winding the taste of the fury tectonic; but also sees saws Bounds (**), Walnut (***), the REBOREDO Anyway ... um gift for the senses. Tranquility, scenic beauty and a bit of Templar history. What more can ask travelers?
Thanks: The Remarkable been housed in Portugal Solar Marcos (in Bemposta) and visited the Castle Downs Róias invitation to this great Hotel Rural.
GPS coordinates: Lat 41 º 17'32 .05 N Long 6 º 30'15 .07 "W
Access: IN 219 of Mogadouro to Vimioso during 7 km and then turns right onto IN traversing about 3 km.