Usually the castles, are higher in a region sites, rulers of the land around, but this Castle of Soure no, why is not this high hill of small alluvial conglomeratic, which is based, near the confluence of the rivers Arunca and Anços. Although little of monumentality, incomplete and degraded, was here that the second document Dona Teresa de 19 March 1128, that the Templars built its first headquarters.
Onset Castle of Soure
Stones of Roman buildings and Swabian-Visigoth, later utilized in the construction of the castle, Here testify the existence of a population. The foundations of the church the church of Finisterre, side of the Castle of Soure, found a Roman sarcophagus from a mausoleum. But is the Christian Reconquista between Christians and Moors, that acknowledges the existence of Soure and its fortress. Who built, Sun Sisnando, Count Dom Henrique or any other?
It is known that integrated the advanced line of defense of Coimbra, alongside other castles or towers simple, such as Penela (**), Jerumelo (*), Santiago da Guarda (**), Arouce (**) ou Pombal (*).
The Castle was small, mas robusto, the type castle Alcazaba and been several times in the hands of either Christians or Moors.
It is known that in 1111 Count Dom Henrique repovoou village, oped despite just six years the Moors had forced the inhabitants of Castle of Soure to leave the place. 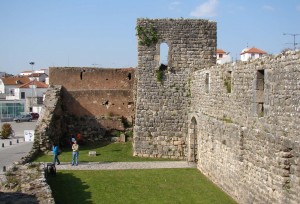 In the year 1122, Castle of Soure, Santa Eulalia and pass Quiaios, by exchange of Dona Teresa, for your amicíssimo-Count Ferdinand Peres de Trava, that the reconstructed; this in turn gave the castle of the beautiful town of Grandfather (*). The Templars came to Portugal in 1126 with the donation of Fonte Arcada in Penafiel.
Soure was the first headquarters of the Knights Templar in Portugal
Before long, with obvious urgency, in 19 March 1128, the Castle of Soure was donated to the Templars, and vast lands between Coimbra and Leiria. Here is establishing its headquarters, carrying out various works there: the addition of two square corner towers, that only one survives and the Tower of Homage, provided with alambor- Templar innovation in military technology architecture.
In 1144, a Muslim onslaught, led by the Vizier of Santarém, razed Castle of Soure; crusaders (here that suffer a major defeat on our home soil) who had managed to escape, joined, in 1147, the troops of D. Afonso Henriques in the conquest of Santarém and the headquarters for the Order would Convent of Christ in Tomar in 1160 (*****).
After the extinction of the order of the Templars and how Prince Lampedusa says 'it takes something changes so that everything remains the same', The castle passed to the Knights of Christ by papal bull in 14 March 1319, constituting themselves as head of commendation.
Later works são made between the sixteenth and sixteenth, here and now Soure Castle lost its strategic military role and functions assumed residential.
Unfortunately, the castle has also undergone a process of dismantling, occurred in the nineteenth century. In 1834, shortly after it extinct as the religious Command, two towers were sold to the Earl of Verride and, in 1880, residents blasted the Southwest Tower, for it threatens to collapse. Nowadays we try to save what can be. 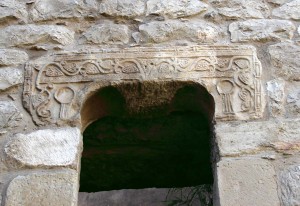 What we see today in the Castle of Soure
The Castle Soure, or the rest of them that, is small, with rectangular masonry unit in limestone.
Originally had four towers and yet there are two. The North Tower, that still exists, would be the strongest, probably with the function of the Keep, torn with window to the center in the second register, reconstructed, in the XV and XVI, judging from the battlements feature. There are still traces of this alambor.
Accesses the bailey of the castle for a torn arch gate along the Northeast Tower. The west tower has a slender window- a vain ajimez– with decorative vines likely Visigothic origin.
Near the entrance, by North Tower, has yet another stylish detached window Mozarab, outdated and small arches with central mullion, probably from the time of Don Sesnando.
The floor of the yard, located opposite the castle are the archaeological remains of the foundations of the church of our Lady of Finistère.
A repair on mamarracho Soure
Until recently há, the castle of the village was in sight for any visitor to passersby on the road, Now did that indecency in concrete that hides the castle, with the approval of the former IPPAR. Decide who should not. There would be no other free space in Soure? Thus the castle already small hides and widen its smallness. And I confess at the outset that only had been the headquarters of the Order of the Templars was not remarkable (*).
A council
Soure is town with character and after visiting the castle, go walk and notice the nineteenth-century facades of old manor houses, Churches in S. James and Mercy, and the idyllic park in the Lowland, bank of the river and Arunca end your tour here, in beauty. But that building the castle pespegado not let me finish this article alone. Patience there already begins to miss me.

Bridge Sequeiros (Sambucus) (*)-One of the most beautiful bridges in Portugal

Almeida, Regions of Portugal, Distrito-Guarda, All articles, Notable towns and villages
1 of October 2010

Castelo Bom (Almeida) (*)- the village that was never classified as narrowly Historical Village of Portugal, but it is nonetheless true and beautiful