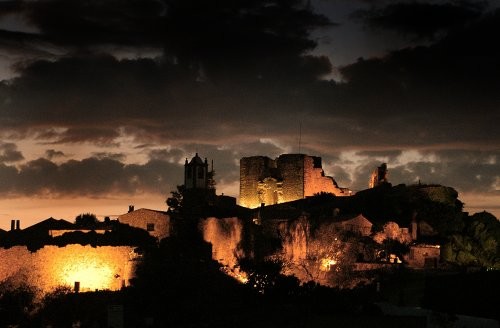 "Castle Rodrigo I kept the image of thirty years, when I first went there, an old decaying village, where the ruins were already only a ruin of ruins, as if everything were to dispose powder. now live 140 people in Castelo Rodrigo, the streets are clean and passable, were recovered and interior facades, and, especially, He disappeared the sadness of an end that seemed announced. We must rely on the historic villages, they are alive. That is the lesson of this trip. "

Castelo Rodrigo is one of the historic villages of Portugal, that is worth knowing in time and scope, the rest are Marialva, Linhares da Beira, Trancoso, Piodão, Idanha the Old, Monsanto, New Castle, Belmonte, Sortelha, Mendo e Almeida Castle.

At dusk, the historic village of Castelo Rodrigo, view of the top of the Saw Marofa, It is beautifully highlighted a hill boleado, with its defensive fence and circular towers to reflect dolphinfish tones, Red, brown and yellow; and around the, fields that are in the spring of a damp green, very fertile.

Some of the history of Castelo Rodrigo

The oldest document, donation of Dona Flâmula Rodrigues reference a castle in this region in 960. Then this region will successively falling to the side Moor or Christian, until in 1055, King Lion Fernando Magno, conquer the castle to Muslims.

The Moorish occupation is represented with a rare and slim, cistern with two doors, with a more recent Gothic arch and other Moorish and a strange Islamic inscription in a house. This cistern well is the monument to the north of our territory with Muslim origin. There are also numerous place names Muslims in the region as Algodres, Almond, Almofala, Saw Marofa hill and the Mosque. Some authors argue that D. Afonso Henriques achievement Castelo Rodrigo Muslims in 1170, year in which founds convent of Santa Maria de Aguiar, back but losing the square shortly after. Certainly not merely a legend because there is no document to this effect. The walls were probably rebuilt by Alfonso IX, King of Leão, in 1209. Castelo Rodrigo owes its name to the count Rodrigo Gonzalez Giron, that repopulated the region this reign. 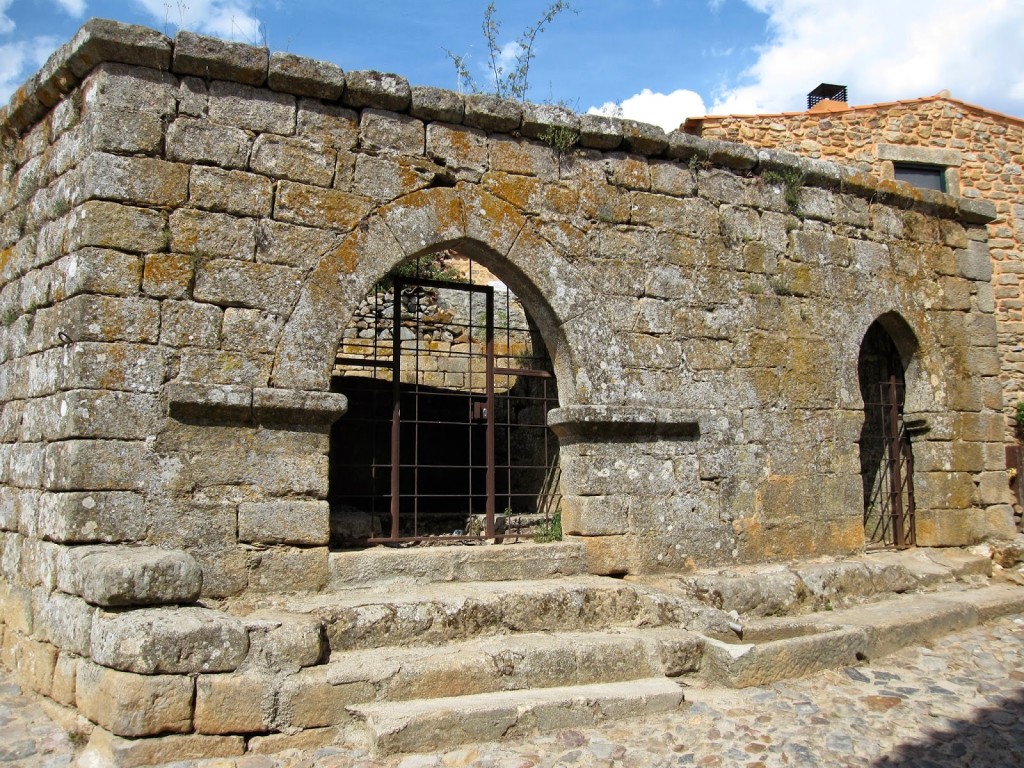 In 1296 Dom Dinis toma Castelo Rodrigo rebuilt-a, repopulate it and assigns it a charter and the signature in 1297 tried to do Alcanices, Castelo Rodrigo was definitely integrated into Portuguese territory. Dom Dinis rebuild the castle and repopulate the village, granting benefits to its residents in order to establish the settlement at this location.

Dom Dinis beyond the walls to surround the houses he built powerful castle crenellated walls, torreões, great donjon, Barbican ditches and climbing rocks. All these structures are still visible in the beautiful engraving of Duarte de Armas (1509-10), but time, and especially human activity wore all this together.

Castelo Rodrigo is a good example of a medieval fortified peninsular. At Present, fortification features extensive rags of the old wall, thirteen semi circular towers and three gates (Puerta del Sol, Port of Alverca, this missing and the door of Treason).

It is known that the mayor of Castelo Rodrigo, Sided by Castilla in crisis 1383-85, the wall being damaged. Hair support the governor gave the cause of Dona Beatriz and the kingdom of Castile, the coat of arms of Castelo Rodrigo is reversed and the town loses its jurisdiction to Pinhel.

Dom Manuel I do Castelo and promove to reedificação , in 1508, assigns new charter. In 1510 Arms Duarte is the town and its castle in “Book of Strongholds”.

During the Philippine domain was set up by county head Philippe to his best and faithful friend and adviser, Cristóvão de Moura, singular figure of our history, and later we will read, also underline ahead.

Castelo Rodrigo still retains some fence gates, several semicircular turrets, various properties of the fifteenth and sixteenth centuries, Church of Our Lady of Rocamadour (founded in 1192, assistance to the pilgrims heading to Santiago de Compostela) with ceilings classified as Public Interest, cruising Independence, the pillory in cage (and cage, perhaps to simulate the identical structure of medieval torture) , the aforementioned cistern (century X and XIV) or the ruins of the palace of Christopher Moura.

Jewry was located within the walls of the old village in the currently corresponding areas to the Synagogue and the County Páteo streets and the Largo de S. John the Baptist. Still exist in the locality Jewish experiences; Synagogue in the street there are magical-religious symbols of New Christians in the doorposts of homes.

“Castelo Rodrigo had, in relation to its size, an important Jewish colony and, when the Catholic kings expelled the Jews from his domains, the Portuguese King John II – (pictured left) Castelo Rodrigo pointed out as one of the five points to allow its entry into Portugal, with Olivenza, Arronches, Bragança and Melgaço, shall pay eight crossed Jew. At that time the population of Castelo Rodrigo walked around 300 people.

Thousands of Jewish subjects of the Spanish kingdoms took refuge in Portugal, settling many of them in the main area of ​​Jewish quarters: Castelo Rodrigo, Guard, Trancoso and Sabugal. In consequence, the thriving Jewish community of Castelo Rodrigo, He was seen increased. However, many of its members would become in New Christians because of the expulsion ordered by the Portuguese king Dom Manuel I in 1496 and which gave rise to so-called “baptized standing”1

“In the Inquisition time around 200 processes were made against figueirenses being the village of Escalhão victim of more than half of the charges. Escarigo, on the border of Spain, with 25% these processes was also very persecuted.

During the century. XX there were still many people practicing and Crypto's heirs in several villages of Castelo Rodrigo Figueira county.

Efraim Bueno, born in 1599 Castelo Rodrigo with the name of Martin Alvares, He graduated in medicine in Bordeaux and became migrant doctor and writer in Amsterdam. He became famous by the paintings / portrait that his friend Rembrandt bequeathed to art history. His funeral headstone, existing in the Portuguese cemetery in Ouderkerk ( Amsterdam ) is a tribute to Lusitanian Diaspora and those who had to flee under the Inquisition; this written in Portuguese and only the date of death, 1665, It is placed under the Hebrew calendar.

Portrait of Rembrandt's A Jew of Castelo Rodrigo (Ephraim_Bueno)

In defense of Christopher Moura's most illustrious son of Castelo Rodrigo

Christopher Moura was the son of the mayor of Castelo Rodrigo and raised in the court of the Spanish, as tutor of Princess Joana, mother of the future King Dom Sebastião and became intimate secretary of the young King Filipe I de Castela being so great worker of the coronation of his friend as king of Portugal, through diplomacy and by buying favors the Portuguese Nobility. If for some was a traitor, for others- and where I include myself- was a savior of our way of living, perpetuating itself through its diplomacy, much of our independence (a moeda, courts, the flag…and above all peace; because it is obvious that the Spanish Empire would take for the weapons our kingdom weakened by defeat in the battle of Alcazarquivir). King Philip, Now I of Portugal, offered him Castelo Rodrigo, as head of County and then Marquesado. Christopher de Moura was still viceroy of Portugal and built a stately palace Mannerist, castelejo on the town, and the popular fury shattered the restoration of Independence, as an act of revolt against this close friend of King usurper, already long after the death of the hero Christopher de Moura. Now dear reader that sat within the palace derruído Christopher de Moura that will draw your own conclusion, but also be sure to notice the landscape beauty, and some remarkable sites that claim.

I still have to remind the victory of Peter Jacques and Castelo Rodrigo in the Battle of Salgadelas 1644. Castelo Rodrigo, due to its strategic position, always been at the heart of the dispute between Spain and Portugal. Another example is given by a fact that occurred 1664. The village was surrounded by the Duke of Osuna and counts legend that Pedro Jacques, hero and prominent military, head of Almeida trim, She asked the few men of Castelo Rodrigo, leave its walls and with only 150 men attacked more than four thousand, sufficed scares and retreat, sorrelfa for the military were causing a humiliating defeat the Castilians, then forcing the Duke of Osuna to flee masked Friar, it is said.

With the end of the wars of restoration, Castelo Rodrigo began to lose importance. Located on a hill, today is a remarkable testimony to study the reality of a village of the fifteenth and sixteenth centuries, since with the decline, to lose importance as a military fortress and square, its inhabitants, from the sixteenth century, They were leaving the walled enclosure in the search for greater convenience and were up settling in what would be the new city, located in the flat area and fertile: Figueira de Castelo Rodrigo. This made the old walled city has remained largely preserved since.

In the Seven Years War (1756-63) the village was occupied by the Spanish army. By the time abandoned, They dynamited the defensive structure.

In 1836, a Rainha D. Maria II would the county seat to Figueira de Castelo Rodrigo.

The village appears in the Elephant's Journey of Jose Saramago. Is that the last Portuguese town of Solomon's way, there, the party that had accompanied him from Lisbon says goodbye to him, there, their surrender to the troops of Emperor Maximilian is discussed.

The elephant came from Ceylon as a gift to D. Catarina, four or five years. We arrived in Lisbon in 1542″. D. Catherine then offers the elephant to child D. Carlos, living in Spain, in 1549, Emperor future of Bohemian, Maximiliano. Solomon makes the walk to Burgos, with all the adventures and misadventures of an elephant traveling through Portugal and the Castilian plateau depicted in the book. O arquiduque Maximilian II, nephew of Catherine of Austria and future king of Bohemia, I lived at that time in Spain with Maria of Austria and took a liking to the elephant and eventually made up for its new owner. In 1552, when the Archduke and his court returned to Vienna, Solomon also make the trip.

Castelo Rodrigo Today is a historic village classified and the most important point of tourist attraction in this region. Notice now the magnificent scenery (*), with the battlefield of Salgadelas, the Monastery of Santa Maria de Aguiar (*), a Bayou (*) the same name and in the small hill north, a Tower Amofala (*), the Roman temple dedicated to Jupiter of the civitas Cobelcorum or on the opposite side of the crista quartzítica to Marofa e the valleys of River Douro and Agueda. But before leaving again thru the winding alleys, full of character and notice that apart from a few dogs wandering, not seen a soul. It, however, stillness is not gigantic and does not install, Before allows the idea that peace and Castelo Rodrigo is an outdoor sanctuary wellness. Photo Credits: Leonel Santos Lopes