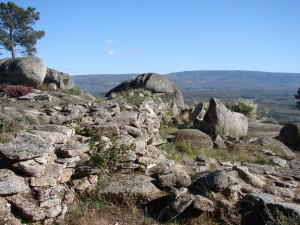 The castro Santiago had two phases of occupation: the Chalcolithic Period (3000 a 3800 a.C.) and later a brief occupation during the Middle Ages. The settlement was first populated Chalcolithic to be identified in the Beira Alta.
The site was studied between 1988 and 1995 by António Valera with the discovery of a vast estate: cerâmicos containers (some of which are furnished), weights looms, objects em pedra lascada (pints of mushroom, blades and sickles) and polished stone (axes, enxós) and remains of manual grinders.
The site corresponds essentially to a housing fortified settlement of sedentary communities and would also be a physical territory.
After visiting the archaeological circuit Ovens Algodres (that highlight the Anta's Slum, Castro Fraga da Pena (*) Add a Aldeia de Algodres(*)clearly identified and descriptive panels in local, We strongly advise you to visit the local archaeological museum in the headquarters of the municipality containing vast collection of the resulting excavated several points.
Only one repair- the Castro de Santiago should be quickly classified as a Public Interest.
Note: adapted version of the local notice board