Historic Centre of the Guard (**) 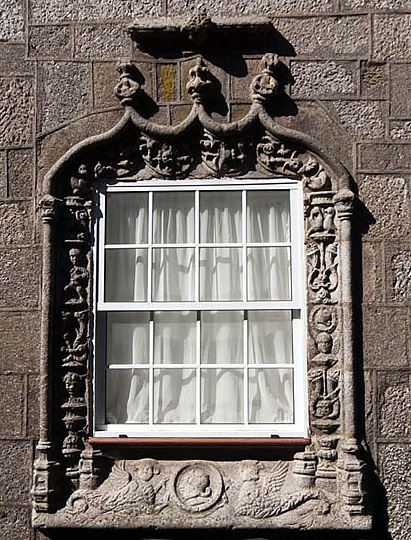 "And it Penalva entire, the city dark, black winter and old age ". (1)
Over time the city of Guarda has been overlooked in its beauty: I do not want here escalpelizar precisely the reason for the error, but the misery will try to convince you otherwise; F is ugly and should be replaced by F taiwan.

A Guarda is the highest metropolis of the country, situated dimension 1056 meters, He was born on a granite spur on the northeast slope of the Serra da Estrela.

The field of natural portela the Beira plateau, as well as the river basins of the Mondego and the Côa, early dictated its settlement.
We know that the city is in a very peculiar beauty, because in addition to the evidence of the Cathedral of Guarda (**), hide notes of various kinds that delight those who enjoy art and history, but which escapes the inattentive looks.
A little history of the City Guard
The foundation of the city we know very little. Certain is that the area of ​​Old Castles neighborhood have been occupied in the Iron Age, in Roman and Visigoth period. The Old Castles seem to be coordinated with the important Roman remains of Mileu do Varzim (*).
In the historic downtown area, prior to the charter awarded by D. Sancho I à Watch, should already have a populated.
It is from the charter awarded in 1199 that the Guard becomes a village of some importance, It is important center of the entire region. Should this real privilege to Don Sancho I (as he becomes the nickname Settler) Transfers for the diocese there egitanense (which corresponds to the current historic village of Idanha to the Old (**).
Dating from the thirteenth century the beginning of construction of the defensive fence and the castle of the Guard. The design of the wall, irregular, plant with oblong, conformed to the topography, running until the nineteenth century as the edge of town. Medieval axes, the manner of cardus and decumanos Roman geomancy (although it has not been found to date any Roman traces in the historical center), were structural and were constituted by Straight Street (Current Francisco streets steps and Rua Dom Miguel de Aragon), connecting doors extreme, Door Covilha or New Door to Door of Curros (nonexistent today), and its perpendicular, unindo à Porta d'El Rei, Porta do Sol

The great centrality of the medieval town was located around the Cathedral (**) (started in the last decade of the fourteenth century and ends almost two centuries later) with the magnificent Old Square and Camões Square (*); another smaller centrality stood in the plaza of San Vicente (including concentrated in Jewry Street Amparo; and Our Lady of Victory church today-gone. These three cores each had their respective temple. During the nineteenth century (for various reasons not worth dissecting now) The two doors were demolished, part of the castle and about 40% search from medieval.

8 reasons to like the Historic Center of the Guard:
1-It has one of the finest and best preserved medieval centers Portuguese, partially walled, preserved with three inputs (especially the tower and triple door Blacksmith).
2-It also has a list of Gothic civil buildings, Renaissance and Mannerist highlighting the Manueline-Renaissance window, Rua Francisco Steps.
3-Hold an old Jewish quarter; the whole are 89 properties with religious magic marks on the doorposts of the houses of the fourteenth centuries vetustas, XV, XVI e XVII.
4-Has a grandiose cathedral (**) incorporating Gothic elements, manuelinos, Renaissance and Mannerist.
5-Sobriety granite intersected well with parsimony castrating the Council of Trent, with a maximum sample the old episcopal palace and seminary (Today Regional Museum Guard) or the beautiful Palace of Alarcões and other various buildings of the seventeenth century.
6-Has some baroque buildings with quality, especially the Church of Mercy, the Church of Saint Vincent and the spectacular fountain of St. Andrew (*).
7-Associates its name to the extraordinary man who was Dr. Sousa Martins, that led to the building of the sanatorium and its leafy park that bears his name.
8-It also has an excellent Municipal Theatre of Guarda with egitanense Carlos Veloso architect work, of 2005.
A Guarda é urbe de singular beleza, with a myriad of aesthetic details, carved in granite hard brown, overshadowing the mystery of its streets - shade and moisture; and with its open views since it was situated in terminal spur of the Serra da Estrela - clarity and sun. Regeneremos the Guard in our hearts.
"But here comes another inexorable memory space marked the wind, loneliness and longing. Sitting in the mountains, this city Old, slow ghosts ferrugentos, there-to rise forever near the pole star. Reconstitute me particle particle in the vertigo of a rebellious teen, pregnant cold whiteness of frequent snow and fertile. White City and eroded the centuries, sheltering the heavy shadow of the Old Cathedral. Narrow streets in the medieval town walls obsidiantes, narrow channels of stratified icy winds in the thick foliage of the trees of the forest. City that ends abruptly, falling into the abyss of steep slopes rising flushed to infinity of obscene gargoyles that the sacred temple shows ironic to accidental tourists. Circular city where, in trouble in the streets, mirrors the maze of Being that cyclically always returns to the starting point. City changed in Penalva, nestled in the mountain ridge and refractory to new ideas.”
Additional References: North Star, Virgil Ferreira, 1962.