Caesar, Virgil, Jovian, António Belo and Mosaic over the Roman Empire discovered in Alter do Chão

About Roman mosaic unique features found in Alter do Chão. It's the fourth century and represents the last corner of the Aeneid. Power will be seen from 21 May 2009.
Gaius Julius Caesar Augustus Otaviano, em Roma, needed to consolidate his power. The republic had become in Empire, in 23 a.C., and, to hold together and submissive, was important to create a mythology, one epic and a belief in the divine nature of imperial power. Caesar called a poet proven, Virgil. Nay: asked a friend, also his counselor and charge d'affaires, very rich and liked to support the arts, a patron, to talk to Virgil. The patrons who, not by chance, Maecenas was called, paid to the poet to write a better book than the Iliad and the Odyssey together. No ano 19 a.C., he died the same, Then Virgil wrote the Aeneid, an epic poem in 12 corners that begins, thousand years later, where the Iliad ends - is the city of Troy. The first six songs of the Aeneid, moreover, emulate the Odyssey, in terms of plot and also in the form, while the first part of the work imitates the Iliad. All Together, Virgil warranty, surpassed the work of Homer. But not ignored. Through a system of references to the literati call intertextuality, ate-it. Some characters are common, as well as local events and, so that the reader who knows the Iliad and the Odyssey is low a higher enjoyment of the Aeneid itself. Unlike what happens in the Odyssey, starring a Greek (Odysseus), the hero of the work of Virgil's Aeneas, a Trojan that, the request of his illustrious mother, flees, after the destruction of the city by the Greeks, in order to erect a new city, a new Trojan, Rome will be. Aeneas was a young man of good family: the father was Anchises, a Trojan prince, but the mother was nothing less than the goddess Venus, he had with the mortal Anchises an extramarital adventure. Was also very well connected: his shield was built by Vulcan, husband of Venus and god of fire (similarly to what happens with the shield of Achilles, that Ilíada), frequented the house of Pluto, the guardian of Hell, and counseled regularly with Jupiter, the God of the Gods. After many adventures, guided by an oracle, Aeneas arrives in Italy. There, have to battle the king of Rutulians, Turn, whom the hand of Lavinia had been promised, daughter of another local leader, Latino, rei dos latinos. But an oracle advised to accept Latin as a foreign warrior son. Aeneas then enlists the help of Latino and, protected by the shield forged by Vulcan (where are recorded all the events of the future history of Rome), and advised by a genius of the Tiber, expires, a close combat, Turno of ivory. Tumbled on the floor, This begs for his life, but Aeneas, after a moment's hesitation, pierces it with his sword. Marries Lavinia, and his son Ascanius, grandson of Venus and Anchises, be the grandfather of the future kings of Rome, who thus see guaranteed a divine lineage and a mythical history, linked to the Greeks and the peoples of Italy. Virgil served his mission, Emperor Caesar Augustus was pleased. 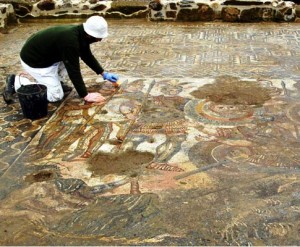 Roman mosaic of the Aeneid

The Discovery of Alter do Chathe
Jorge Antonio first met the head of a marble statue of a girl representing. The hairstyle, in long braids pulled back and caught in ass-Ponytail, denounces the fashion of his time. Just find out when he wore feminine look, and know that the period belongs the statue. It was this thought that George Anthony, that is natural and archaeologist Faro Mayor of Alter do Chão. One thing was certain: the presence of the sculpture was a sign of the existence of a rich house, a true domus. So far, had been discovered to another base statue, Apollo, near a zone of thermal spas, that they have been an important Roman town and is today buried beneath the Alentejo town of Alter do Chão. The city was called Abelterium and began to be excavated in 1954. The archaeological site was developed in the area between the soccer field, Land belonging to a STUD FARM, and the sports hall which was to be built. Became clearly visible zone of the hypocaust, where the air heated by a furnace of firewood circulated under the floor, of the frigidarium, which ran cold water, Massage the area and the community latrine. During the excavations, also arise the necropolis, where, judging by the luxury of the items posted along with each body, would be buried the elite elements of Roman society at the time. It seemed possible, therefore, if being in the presence of a great city - one civitas, and not a simple vicus (populated).Jorge António, 38 years, works eight in the House of Alter do Chão. Had completed a degree in History and Archaeology at the Faculty of Letters of the University of Lisbon and was unemployed. Sent a resume to the Board of Alter and managed the place. That same year 2001, prepared a draft for the Archaeological Site of Ferragial d'El Rei, that would only be approved in 2004.

It was then, with some financial support, that the work has begun. In its Office of Archaeology, installed in two rooms of the building Cineteatro of Alter do Chão, Jorge armazena, organizes and studies the findings of recent years, distributed boxes labeled - "Fragments of plaster", "Elements of ornament", "Common Pottery", "Currency", "Glass", "Applications for furniture", "Textiles", "Leisure", "Home Lighting" On a table ..., the nearly complete skeleton of a man, buried for about 1500 years. Tinha 1m e 62 cm, between 40 and 49 years from the date of death, and was recog. It is what is known about ele. With these elements, and some more fragments of statues, fresh, walls, Jorge Antonio was imagining the city that existed in that place, and, judging by the traces, never been properly abandoned, today. Was there a continuity of occupation, from the pre-Roman settlements, the Visigoth, Arab, Christian, to the castle, built in 1349 por D. Pedro, and the present town of Alter Chaos. But a year and a half that made the great discovery was there. 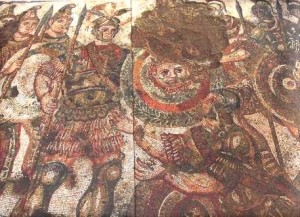 The final terms of the Aeneid represented in mosaic
Mosaic Near the spot where he had found the female head, em mármore, saw the figure of Aeneas arise, composed into tiny tesserae of colored lime paste and other glass, Blue, green and yellow. Extending the area was exposed and brought to light the immense mosaic, of 53 m, consisting of a geometric frame and a figurative zone unprecedented splendor. Eneias, with its characteristic plume, broken by being hit by a spear. On both sides of the panel, face to face, Greek warriors and Phrygians, defined by their helmets. Between the two hosts, a medallion with the figure of Medusa. At the center of the panel, prostrate at the feet of Aeneas, Turno of ivory, begging for his life. Below, on the right, the figure of Vulcan, cuspindo fogo, and left to the genius of the Tiber, whose pitcher pours water from the river, represented in blue and green tesserae of glass paste. "scene is the last corner of the Aeneid", explains the Public Teresa Caetano, researcher at the Institute of Art History, New University of Lisbon and the Association for Research and Study of Ancient Mosaics and the Portuguese Association for the Study and Conservation of Ancient Mosaics. "Turn is asking Aeneas to save his life", says expert, which is already considering the finding of Alter do Chão. "Há the god Tiber, represented by a genius of the river, supported in a vessel you pour water. The other side is Vulcano, friend of the mother of Aeneas, it was Venus, drying up the river, facing the genius of the Tiber ... "Teresa Caetano he would have never seen um mosaic like this. No, no country, NEM on the peninsula, or perhaps in the world, any more of this quality and in this condition. The study, that lasted vai, at least, by the end of this year, is still early. But it is possible to draw some conclusions: Mosaic is the fourth century, the late Roman Empire, and belonged to a rich house. At that time, as a reaction to Christianity which was spreading, become fashionable, among non-Christian Roman, mosaics with motifs of the Iliad, Odyssey or Aeneid. The rich and influential men in the Roman world were keen to flaunt a deep classical culture, and a link to the pagan values, they considered superior to Christianity. It was a demonstration of status and power. Nothing is known about the man who built the mosaic Abelterium, except that it was very rich and cultured and have a great importance in the city. The mosaic will cost a fortune. Not done, certainly, by an artist from the region, because there was on the peninsula, it is known, a school with such mastery. But there are several theories about this. Jorge Antonio speaks of itinerant artists who went from house to house, with a catalog of images. Teresa Caetano imagine a kind of "multinational" mosaic art, would have "branches" in various parts of the empire. The tesserae own, some historians thought were made with each local materials, seems at last that were produced in the same "factory", and transported by boat to the various regions. The remains of a ship, laden with colored tesserae, naufragado ao largo das Berlengas, have confirmed this theory. Most tiles were made by craftsmen, who copied the images created by the "designers" of "multinational", with minor adjustments. Will not have been the case with the panel Alter do Chão. "The wealth of details, the shadows, bodybuilding, the very technique of perspective "betray the presence of an artist. A true Imaginarius pictor, that have been explicitly of Emerita Augusta (Merida), capital da Lusitânia, or even Rome, to produce the work in the house of tycoon Abelterium. He was a master, that would pay the weight of gold, but have drawn what your client asked, as was normal at the time. More or less glassy folder, for the details of the eyes, water or fire, another mythological scene, another character, all this was decided by the artist and client, a scholarly discussion of who mastered the classics. Jorge António no doubt that the owner of his House of Medusa, baptizou as domus mosaic, was a learned man. Among the various divisions who discovered, account is an office (tablinum), which shows that it was an intellectual. This division leaves a corridor linking the bedrooms, the peristyle - the indoor garden - and the triclinium, or dining room, covered by mosaic Aeneid. "The house should have at least twice the size of what is in sight and, probably, a second floor ", explica Jorge António. "It was here that the owner received his guests for dinner", to be continued, walking on the mosaic. "At the center was a table and here, vaulted, os sofás, where people lay, as described in Banquet Trimalquião, of Satyricon ", pursues the municipal archaeologist, considers that "urgent" to continue the excavations, and preserve the treasures found, despite the discovery of the mosaic have been a year and a half ago and only now have been leaked. "It was a very important man. An aristocrat, a priest. Maybe a politician. "

A comment Caesar, Virgil, Jovian, António Belo and Mosaic over the Roman Empire discovered in Alter do Chão