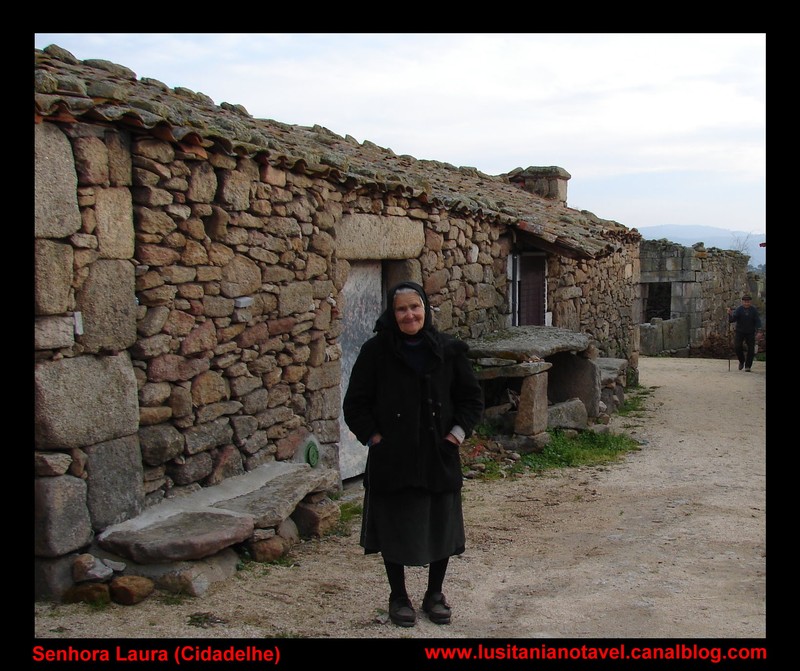 Do not know who told me that Cidadelhe was a single village. Also even before visiting the li "Journey to Portugal”, Saramago, that debits an extensive list of accolades to the site.
Numa afternoon of invernosa 2005 delivery so at your demand. The road, that part of Pinhel, is tortuous after Azevo, passed by a wide open field of granitic fragões, we know beforehand that the existence of such forces the Rock River Coa flowing in ravine, what is for us harbinger of different landscape.
And finally Chego. Deception. But then this is the "heel of the world"? An overworked Aldeia, equal to all other comezinhas!
Right there in conversation I learned that Cidadelhe divides into two, is the "People's Up", the Eiras, last, and the "Low Povo", senior.
The Hermitage of San Sebastian
The Eiras have interesting Chapel of St. Sebastian, as Alpendre, shading a provincial Mannerist painting depicting Calvary. Has within it a Patusco San Sebastian, referred by Saramago, with its huge "wags", and that is a minor composition of an image-maker of Castelo de Paiva (Mrs. Rosario sends word to Lord writer who became disgusted for having played with the saint).
It's almost raining, mas este viandante intrépido, will still look askance at the "Village Low" and now yes, stand still the frustration of coming here.
The Aldeia de Baixo
Says our Nobel, "Aldeia is all the stone. Stone houses are, stone streets. Many of these dwellings are empty, There derruídas walls. Where people lived, bravejam herbs.
The traveler marvels at some insculpidas or lintels with decorative bas-reliefs: a bird perched on a winged angel head, between two animals that can be lions, dogs or wingless griffins, a tree covering two castles, on the schematic composition analyzes and garlands ". 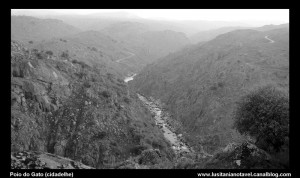 The humble village crystallized in time, throughout the band, abound rustic and archaeological artifacts that no longer exist in small villages and a city unversed in ruralism dares not understand and designate. This ancestor set is in a state of neglect and decline, but still has immense poetic beauty.
Are archaic rural dwellings, some round of castrejo appeal, the lofts placed strategically, the troughs (As far as I ever saw), plows, from charruas, anthropomorphic graves turned into lagaretas (a rare lageada) and serving the chickens, is the church with beautiful coffered hagiológios seventeenth century, are numerous brands of religiosity… and is the "citizen".
The purpose of this back José Saramago. "The traveler meditates on the singular love which binds a people lacked material goods as a mere stone, with talhada, gnawed by time, a crude human figure that has barely distinguish the arms, and are confused thoughts, seeing as it is so easy to understand everything if we let go by essences paths, this stone, este homem, this draconian landscape. "What is known of the history of citizen?», asked the traveler. 'Little. Found is not known when, some rocks from beyond » (gestures to the invisible river bank of the Coa)”.
I also find the "beyond"; is a rounded knoll, shorter than the "people of low". It is the "Moorish Castle". Daqui to darken slightly and drizzle, everything around me is sad, not seen a soul. It was a promise to myself to go to the "beyond".
Voltei to Cidadelhe when the village reverdescia force in the Spring.
The Aldeia de Baixo, which is inhabited is magnificent with this light, and I know the owner Laura, referred to in the book of Saramago, which happens to be my cicerone. 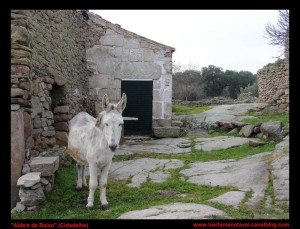 Moorish Castle and the Poyo the Cat
Now came the time to go to the Castle of the Moors. Eye of the hill top village out of time and I feel this affected fullness of who looks at ocean cliff. Before leaving the ladies ask me not to go, men can not be in the "Castle" at night. But I still have a couple more hours of sun, that strange fear took hold of my girlfriends?
The journey is distant to the "plus" about 15 minutes, step by a gigantic loft, deambulo among oaks, cork, holm, executioners, tomilhos, oregãos, estevas, azedas… The nature here is breathtaking in its Mediterranean biodiversity.
The plates show me the "center of the Castle", the "Hangman of Lusitanos" and the "Poyo the Cat (**)”; so here is what I drive.
Here the river Coa abysmal! I am seated before a deep valley that reaches 250 meters to pique. The "Magic River", bramidor and enraged, battle against the cyclopean granite cliffs. Santa Comba granite place of the shale and then the river of "magic stones" serene when dealing with less steep margins due to greater mildness lithological. It is one of the most impressive gorges that saw (and readers know that I am a geologist with some experience). I think, I look and do not forget. A golden griffin flies in front of me, contrasts with the gray tone granite, suddenly, gives two turns in a closed circle and disappears at Wounded Knee.
Back to back and ignoring the "Hangman of Lusitanos", embrenho me the "center of the Castle"- the experience is exceptional.
It is a rare Mediterranean grove; and the thud of my footsteps, I'm waiting to see emerge from behind a "Baroque" some Celtic druid with his magical scythe. It's a myriad of sensory details in this tunnel of vegetation. It is also a solitary journey inside me.
Stones are cushioned, Roman columns, linteus, friezes, Mills… and a clearing stumble and find my first rock engraving in a fragmented granite; anthropomorphic one with his bent bow and could be Bronze Age or Iron. I remind readers that we are in the southern end of Coa Valley Archaeological Park (*****), rated UNESCO World Heritage Site on December 1998 and I'm close to important prints and paintings of Beech that are installed on the river bottom. 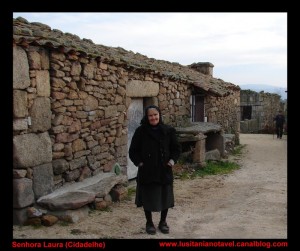 The "Castro" had wall, that still exists in some sections and has been inhabited since the Bronze Age (from X to the XIII c.). Was also Romanized town and was part of the territory of the civitas of aravos (Current Marialva).
The "Moorish Castle" is a transcendent and magical place, of great archaeological wealth, landscape and natural. It is the southern entrance of the finest outdoor museum of Humanity
Similar sentiment, the type mistérico, is possible to have, for example, in St. Peter Vir-a-doe (**) in Monsanto (***).
Cidadelhe is also a World Heritage site
The engravings and cave paintings of Beech EDATE between the Paleolithic and Iron Age. These are unique in the context of the Coa Valley, once, In some cases, coexist with written reasons Paleolithic paintings in granitic support. The paintings are usually protected from the erosive agents in cavities.
Cidadelhe is important, because it was here that began the discovery of the "Sacred Valley": The engravings and paintings of Beech were first identified by Francis Sande Lemos proceeded when the environmental impact study commissioned by EDP, study that precede the construction of the hydroelectric dam to the river Coa. Following the recommendations of this study, was constituted by IPPAR Archaeological Project Coa, coordinated by Nelson slices, who came to identify the first Palaeolithic engravings of Canada do Inferno. I've been to Cidadelhe several times and was never able to visit the antique because of its inaccessibility. 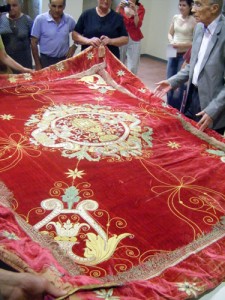 Cidadelhe and the pallium Veneziano
Cidadelhe has a famous canopy, embroidered silk and gold, in typical crimson velvet Venice, which is lovingly kept in a private house, in absolute secrecy and only on Easter Sunday, during the Procession of the Blessed, can go outside. It is one of the gems of the earth; maybe I still do not deserve your contemplation, but the traveler does not grieve, because Cidadelhe has much to repair, sit down and think.
A curious legend relates that men can not be in the Moorish Castle after dark, they will be attracted to endless sensual pleasures by Moorish and disappear forever. I confess that I never ventured down the paths of Moorish castle at night because he is dead, not Vinha not Horto. Probably in this legend is reminiscent of any pagan cult.
Where can I go to the Cidadelhe, with the company to be cicerone, or alone to sit in Poio Cat, to look at that and think about the amazing landscape landmarks that shaped me and think about the billions and billions of coincidences that allow me to be here, and think of the thousands of men who inhabited this remote village in the world, from the Paleolithic to the present, their joys, pains, projects, crimes, remorse, Adventures, religions, battles, and further dialogue with suicidal sitting beside me and disappeared over the centuries here, they narrate their sorrows me and I try to decipher them how beautiful life is and that we are in hell about us.
Cidadelhe has the most beautiful antique Art rock outdoors, declared World Heritage; It is rich in archaeological castro and magical evocations; contains a whopping lookout for vertical cliffs of the river Coa; has a small rustic village, historical and literary, truly rare and immortalized by Saramago; and all this surrounded by a beautiful natural environment. Unfortunately the Portuguese are rare in the know. Cidadelhe and its surroundings, is the pair of Marialva (***), Monsanto (***), Linhares da Beira (***), Sortelha (***) and Monsarraz (***), one of the most beautiful villages of Portugal. Cidadelhe is the Village of our life – taking the home, almost all visitors who discover how unique city and I accepted this gift.