Not Museu Nacional Machado de Castro in Coimbra, we visit Roman cryptoportico of Aeminium, which is one of the most important works of Roman architecture and engineering in the country.
Discovery of Roman cryptoportico Aeminium
Prior to 1929, it was known by multiple indications, that under the Museu, Roman galleries crammed existed. From this date the buried construction has been studied, excavated, and put the enjoyment of visitors. However, research was discontinuous and only 2007-08 been possible to complete the study of this remarkable monument.
Chronology and function
A city ​​Aeminium was born two thousand years ago, where today is located Coimbra, By restructuring the Lusitania by Octavian Caesar Augustus. In the place where today the museum found itself the city forum. For the construction of this building was necessary to win the cryptoportico the slope of the hill and set up an artificial platform. The Civic Forum was the place, religious (Basilica few foundations remain), political and administrative city, here because it was the place of intersection of the thistle and decamunus. 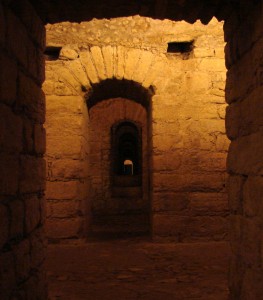 A little later, when Claudius ruled, in mid-century, the cryptoportico have been rebuilt, by architect Gaius Serbian Lupo, the extended, making it the largest Roman building preserved in Portugal.
In addition to its main function, it is believed that the cryptoportico, had daily use, that serviriam, for example, for cultural events or simply walking in summer, thanks to the freshness of space.
Description of cryptoportico Aeminium
The monument consists of two floors of different width, determined by the slope of the hillside.
O piso inferior, which is the true foundation of the upper level and all that is built on it and still support the museum.
It consists of seven identical cells large, communicating between themselves and with a gallery perpendicular to them, the extremes that led to higher levels via stairs. 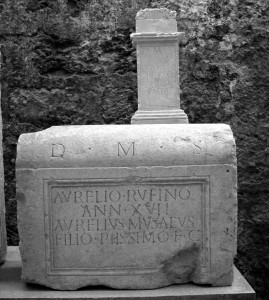 The upper floor achieves built almost four times higher than the low floor area and consists of two galleries, equipped with communication arcs between them, being turned west for seven smaller cells, which are based on the lower floor; this way, in the vast and complex galleries, spreads out diverse Roman art: with statuary (know where the busts of Trajan- with its strong and determined air of Andalusian, Agripina a antiga, mother in law of Claudius and Nero's grandfather, Vespaniano, with your wearily, this in the foreseeable Livia, wife of Caesar Augustus- all these materials are performed in Estremoz-Vila Viçosa marbles; gravestones, they include, the poignant Arula the Vagélia Rufina, one child, father and grandfather who makes a dedication, evoking the gods manes; the honorific Tombstone City Aeminium the emperor Aurelius Flavius ​​Constantius (305-306 d.C.) and that was how it was discovered city name; or the top of a stone table that would serve libations to the gods.
The cryptoportico Aeminium is one of the most beautiful and original of the Roman world.

All this gorgeous set labiríntico, is immersed in gloom, the cracks with the light and ventilation ensured. The vaults are lime- o work CONCRETE- poured into wooden formwork. The stone building is the site limestone, dolomite, yellow tone, Lower Jurassic – which also served for the construction of the Old Cathedral (***) or part of the Romanesque monastery of Santa Cruz (***). This to rocha, that defines the yellowish hue of inner luminosity.
Destroyed the Empire, Board disappeared, but cryptoportico had used in the Middle Ages. Security or other reasons led to its rubble and the town lost his memory; but now reborn from the rubble and is considered by experts, as one of the most beautiful and unique criptopórticos the Roman world.
Hopefully the public fountain, addorsed at the base of cryptoportico following the decamunus, and that would certainly be important in Aeminium, is musealized. The front of the main source was discovered cloaca and its derivations, side streets and a large public building ... and now we're all waiting for the reopening, do Museu Nacional Machado de Castro.