Dolmen of the Chapel of Our Lady of Mt. (Penedono) (**)-Cults entwining Terras do Demo 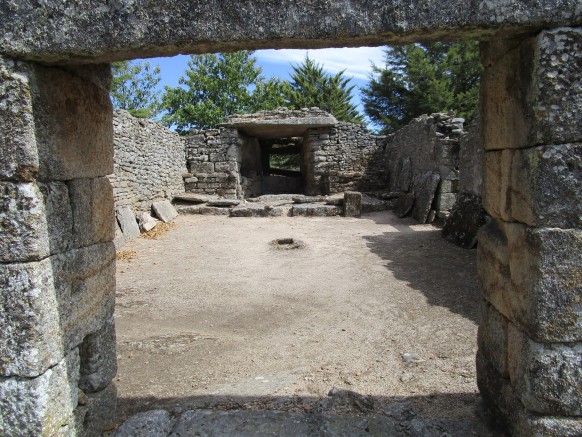 When I came to Dólmen of Capela da Sira do Monte, somewhere in 2002, the day was cold, cinzento and chuviscava. The desconsolação dominated the harsh desert location in, removed from current humanity, and belonging to the Demo Lands, but nevertheless the Dólmen of Capela da Sira do Monte, It is a unique space in the Iberian Peninsula.
"From must-visit: is the jewel among the megalithic funerary monuments of all Beira Alta! It was classified as a National Monument in the year 1961, given its rarity and exceptional importance in the context of national prehistoric heritage. "1
The dolmen of Senhora do Monte is rare in the Iberian Peninsula, By also house a chapel. It is accompanied by more 5 sights: Carvalhal (a twenty meters), Lapinha, Turgut, Marof e SANGRIN.

Legends and the Pilgrimages Dolmen of the Chapel of Our Lady of Mt.

This temple was associated with a festival dedicated to Our Lady of Mt., where on Monday Easter, as 7 nearest neighboring parishes, They went in procession with the seven crosses and there gathered around the chapel.
When she did not want to leave the chapel, repeatedly, overnight returned by their own means, and the next day was brought to the church. In these incursions, crossed the lot, in a place called "Lady of Rastinho", because the granite slabs have a deep marks that appear footprints to what people say they have been left with the image of Our Lady of Mount these night walks.
The image calmed when it was placed in the church of Penedono. At this time this beautiful picture is the parish museum of this village. According to the inventory of parish goods 1911, They were also part of the estate chapel of Santo Amaro and San Francisco images that are in the Altar of Souls in the mother church.
Mount Lady of Dólmen consists of a prehistoric large grave, having suffered, deep architectural changes when assembled Chapel, (perhaps there was a primitive in the thirteenth or fourteenth century, serving image typology of Our Lady of Mount already said and was remodeled sometime between the second half of the sixteenth and the seventeenth century or even in the nineteenth century).
The use of their funerary structures for the construction of this chapel, increased sense all mystical and religious who had the tapir, making it one of the rare cases of tapirs chapels, ie Christianized in Portugal
The Dolmen Chapel of the Lord of the Mountain Have a polygonal chamber and a long corridor leading, whose height is descending in the west-east direction. The placement of a granite pillar, the middle of the hallway and at the entrance of the chamber, as well as reduced dimensions of the struts from the entrance hallway, It shows that the intention was to make it difficult to enter this monument. Maybe the camera just might be elected or close some of the deceased, watching the sun rise, waiting for his resurgence. 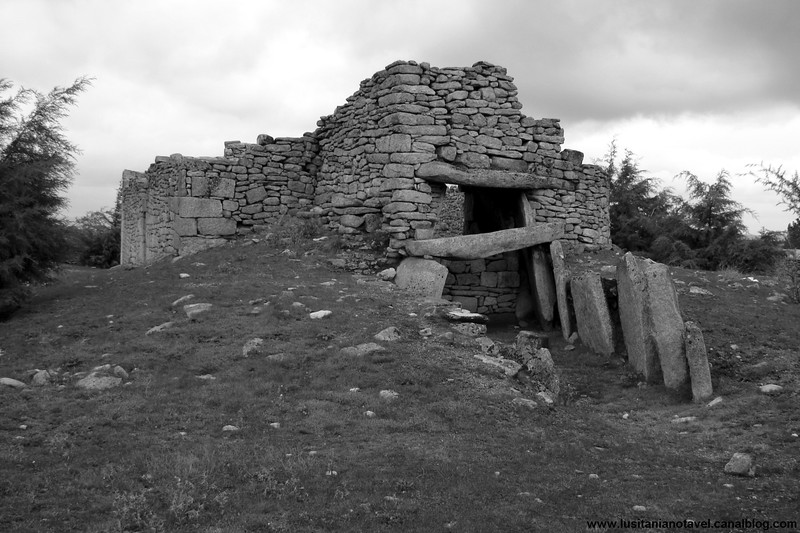 votive character tank Dolmen of the Lord of Mount Chapel
Of great importance to study the in Portugal megalithism, here it was exhumed a votive deposit of collective character, comprising a ceramic container and a receptacle box as likely offerings, now on display in Space Identity and Memory, like blades, axes and ceramic containers, microlitos, a spheroid and still coals related fires perhaps rituals. The set of samples of carbonized plant matter allows us an exact date use the tapir year 3290 – 301 a.C.)
"The tomb was the target of a violation in the Bronze Age. The effectiveness of the structures placed in the corridor prevented access of violators through the atrium. They then chose to remove part of the buttress North side of the aisle, using a burying space and where placed about four tens of ceramic containers. "(2)
Many centuries later this sacred space remained, with the building of a chapel of unknown age to underline the mystic and religious meaning that the monument had already. The chapel was built taking advantage of the monument chamber, removing her bedside mainstay is one of the rare cases of dolmens Christianized in Portugal.
The ecclesiastical decision that led to this reuse must have stemmed from the desire to Christianize the local pagan religiosity that, possibly still have some importance in the worship of local beliefs.
Previously described in the article on Anta of the Quartz Arcainha the Side (*), one possible meaning to the importance of dolmens in Neolithic
Avulsamente can still say that the camera tapir is the chapel of the temple, that the corridor is strangely behind the temple, that the floor of the church encounter a strange rectangular sink, I discover two pentagrams in derruídas stones, that just over 20 meters is another of the rare tapir entrance exam type- tapir Carvalhal.

The chapel tapir Senhora do Monte is a truly unforgettable enigmatic place ...!

Personal Note- The first and only time I was with her in a tapir, Fiais in the Tile (Carregal do Sal), find much mercy to everything, and disappeared, with some scare our; suddenly appeared in the Soul Hole, saying he had returned from the dead. The first time I came to Dolmen of the Chapel of Our Lady of Mt., everything was very new and I cried like I never did in life, seeking their signs; these stones found nothing, but I am very, due to its improvement.

3 Comments Dolmen of the Chapel of Our Lady of Mt. (Penedono) (**)-Cults entwining Terras do Demo