Believed in vetusta Braganza and comes right to mind this magnificent monument is Municipalis Domus, bouncing the ex-libris of the city tour.
What draws so many people to view it is to be a unique and mysterious monument in the Iberian Peninsula that honors this right now so rare it's still water and municipal power. The name of Domus Municipalis have emerged in the nineteenth century, and means "Municipal House" em LATIM.
Is inserted into the citadel of the Bragança where other notable monuments such as the Tower of Homage include (***) or bear the pillory (*).
This Domus Municipalis integrates a roadmap of the northeastern Romanesque that we have discussed the following monuments:

It is very rare to civil Romanesque buildings in Portugal, however this work beyond its monumental size and reaches uniqueness is in its architectural lines a perfect space. Masonry granite very well specified. Outwardly has the shape of a pentagon uneven. The most extensive face tem 14 meters and the smallest with just over three.

The date of its construction is enigmatic. Could be have been built in the twelfth or thirteenth centuries in the Romanesque style full period or be coetâneo the building of the Tower of Homage (***) the first third of four; thereby building would be made in "Romanesque" although the style was already very into disuse.
We all believe in Abbot Abaçal and this refers to the existence of a heraldic seal, Dom Sancho I, of domestic dogs in the building, which suggests that its construction may have been undertaken in the first half of the thirteenth century. But where is so stealthy signal? Trust the magnificent Abbot, you, because the entire region should have its.

The lighting of the Domus Municipalis is performed by an unbroken string of windows perfect arch, along all sides of the construction. All windows have smooth frame, Expecto seven placed this, that have, internally, one archivolt with starry ornaments.

The Domus Municipalis had a dual function

The underground part of the Domus Municipalis form a cistern and show that the objectives which governed its construction would have been utilitarian order. This cistern collected rainwater and springs. Over a gutter runs of the cornice, for receiving rainwater, conducted to the cistern.
I recall that the water in the Middle Ages was a very meager and essential, especially in times of war, when Bragança had to be a self-sufficient bulwark of defense in trances harassment.
There are other tanks with some similarity to Domus Municipalis in some castles of the Middle Ages as Algoso, Lamego or Marvão, but the fact that on the vaulted cistern have been built one second floor covered intended to accommodate the municipal council, confer you the Especto and features single specimen. 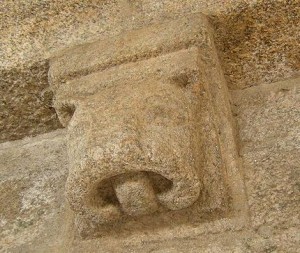 The add-back of the barrel vault, covering the cistern, form the paved floor of the hall, the three openings which are quadrangular, that make the connection between the two floors that were covered with grills for your protection.
This is a magnificent space consisting of a single fenestrated room with a bench running along all the walls, Stone, to seat the members of the municipal council.
The exterior cornice rests on 64 puppies and the cornice interior tem 53, some of which historians holding our attention and should be thoroughly studied.
“'To learn is not enough to hear outside, is meant by 'within', so wisely said our Father António Vieira coming here because the friend feel something solemn appeal to medievalism with its ample interior space, united, cool, even in the summer heatwave transmontana with its Ventanas amestrarem the play of light on the floor of Domus Municipalis.
The reader has visited this fantastic monument?