Dorsal is a small town, anchored in a spur on the reservoir dam of Castelo de Bode in Zêzere. Due to its position the town has an interesting landscape impact; beyond this reason, other two claim your visit: Templar medieval tower and the main church.
Dornes had at least Roman times and is what remains of a village that already existed in the twelfth century, which was respectively Templar, passing these to the award of the Order of Christ. Manuel was granted a charter in 1513.
The medieval tower has a pentagonal plan, a rare solution in Portugal, and is built on shale (Rock the region), limestone (mainly in cunhais) and what a masonry.
The origin of the tower must be Roman, is visible as a title inside the tower almost intelligible (we have not seen this to be closed). Indeed as can be seen by the tower foundation rests on the wider base of another tower, who might be Roman, away you no guarantees in this. 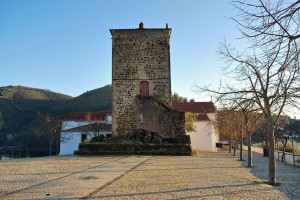 The tower served as a watchtower Templar as implied by the funerary stelae deposited therein and is situated in the most important Templar region of Portugal; Nearby is one of the most important monuments of humanity Templars-the Convent of Christ in Tomar (*****) classified as a World Heritage Site and Castle Almoural (***) one of the seven wonders of Portugal (to popular vote). Also in the county of Ferreira Zêzere are several local currents shaping sacralization of the territory and the order of their preference liturgical and cultic: Holy Spirit, Lady O, Santa Catarina, St. Anthony, St. Sylvester, Sao Pedro Castro (this place must be given to our sight soon), San Miguel, Santa Maria… Here lies near the ruins of the Tower of Thief Gaião or Langalhão, related legends of giants, as associated with Templarism (another site to deserve our attention and not visited). 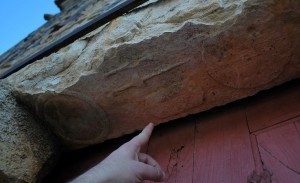 Accesses the interior of the tower Dornes by a door situated at half-height, evidence of its previous military use, lying inside the lintel of limestone, a curious epigraphy, with two shells, a javelin and a spear ignota origin.
The bell tower serves today the imposing parish church which is his neighbor, result of adaptation in the time of King Dom Manuel.

On the day of our visit, the sun was already collecting and not been able to visit the church of Dornes, foundation linked with Queen Isabel, probably 1285, Beautiful saying by their contents and which highlights the tiles, Iberian organ pipes, the stone images of Our Lady of Tears one Pieta)- patron saint of the parish and considered miraculous and which has a legend associated himself (read it here) and the beautiful sixteenth-century oil figuring the “Rest in Flight to Egipto”.

The sun declines and then depart, to think that those lucky souls are, resting on the tip of the spur in the cemetery of Dornes, finally a chill down the spine, perhaps because ossitos accustomed moisture may be eaten away with more pay. Leaving with reluctance as ideal haven of calm amid the storm, why not visit the church inside, because the outside appearance is modest expeção the interesting gothic tombstone with a coat. We aim that this is a landscape of water and the schist hills debruam the Castelo de Bode are monotonous and without liking, involved in green by monoculture pine, oh and not to tease a coffee we took!