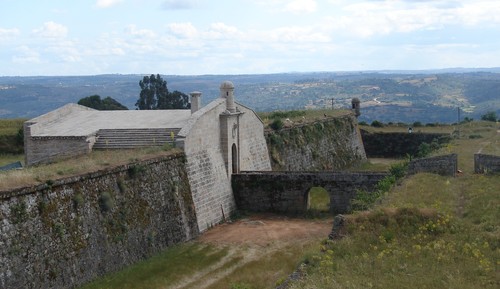 Almeida strong: Soothing views of the scenery (*)
Viewpoints in Portugal-Series Leaks, Number 2
"The contrast is striking between the sawmills, the north, bar the near horizon and the plateau to which they do not see the end: about him, the green spots are becoming increasingly faded, undecided and far. Really, Alentejo is that announces ".
Orlando Ribeiro, Portugal, the Mediterranean and the Atlantic, 1945
Portugal is a country with a diverse landscape, due to its varied and disparate geomorphology influence the effect of the Atlantic Ocean, the North and the coast and the Mediterranean climate, south of the Cordillera Central. So Portugal is a country of viewpoints and that many of them should be classified by the Portuguese State in order to be optimized, they are a huge asset of our territory; we are bound to have some literacy landscape and the magnificent Portuguese viewpoints are here to help us.
The detachable Público trails is to be congratulated because it highlights, 20 miradouros, that in here we will also publish. Texts are daisy Paes
Almeida strong: Soothing views of the scenery (*)
The castles Streak defending Portugal ensured peace to the rest of the country and looked carefully to the lands of Spain, out of sight. Almeida is one of these fortified villages. Behold the third viewpoint of this trip to our heritage of views.
In Almeida, since the twelfth century it was setting and changing, in permanent fights, possession of line Leonean territory, Muslim and Portuguese. 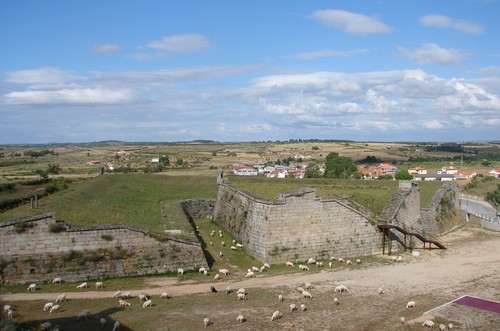 Finally, in 1297, pelo Tratado de Alcanizes, D. Diniz ensures the final possession of Almeida and grant a charter. But in all ages turned, the price of many attacks and deaths, to lose and recover until in 1641, just after the restoration of nationality, begins to build an impregnable fortress defending the borders of our country over the valley sloping river Coa.
When viewed from above, form a star with successive lines of ramparts, however, as we approached the fortress only see the line close to the ground of the outside walls, a porta de entrada, cypresses, the church bell and a huge ash that settled along the outside of the fort curtain. We do not realize the human work built plant, forming a star twelve nozzles (six bastions, interspersed with six curtains with ravelins), impregnable battleship that from inside prevented the enemy entering the national territory. 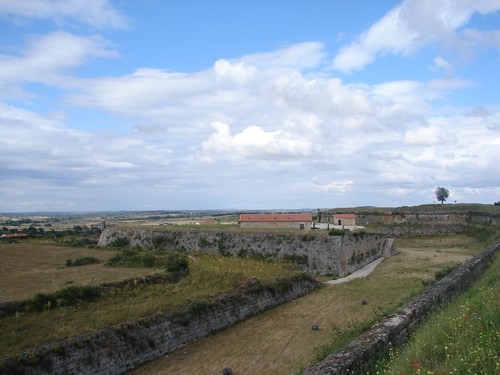 View of the sky, two-dimensional, Almeida imposes to the landscape with great force and visibility, but the three-dimensional landscape absorbs it visually, as the fortress is on a rise and not sticks.
The views that we find from the fortress are so soft and not dramatic on the surrounding landscape, and we did not find a viewpoint that matched the very strong mark on the landscape that we took in our visual archive.
During the visit to various circles of ramparts, revelins, curtains and ditches, canhoeiras and mortar launchers, watchtowers and vestments in slope, two possible viewpoints identified themselves in this remote point in Portugal: eastwards, next to the cemetery, with a large cypress trees that framed the landscape of Spain and to the west, one of the strong bastions, a spot under a huge ash tree that dominated all the view of the streak Portugal.
We have chosen setting and the vertical volume of the tree which is in contrast to the succession of horizontal lines built ramparts of Almeida. Rolling hills follow one another covered with oaks and dry sowing land, and despite missing a bank where enjoy the scenery in peacetime, is there you see where it begins Portugal.