A Fraga da Pena, in the county of furnaces Algodres, is a gigantic granite tor, a 750 m dimension, that soergue, admirably, near the top of the western slope of the Ribeira Muxata, that fits in a didactic fault.
A Fraga da Pena is a geomonumento which overlooks sweeping panorama
The character strongly steep the whole forest, and steeply sloping strand natural conditions provide good defense and is an exceptional point of prominence in the landscape, which overlooks a vast panorama to the Central Cordillera. The site itself is a magnificent geomonumento.
Taking advantage of the natural features of the site, structures were built fortifications (thick walls, sometimes exceeding three meters), forming two small contiguous precincts. Also nearby Fraga da Pena, exterior walls, traces of occupation were found. 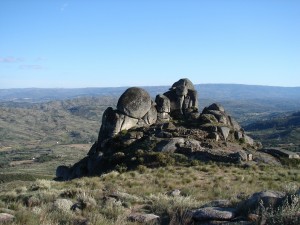 Fraga da Pena-town from the Bronze Age to 4000 years
The town of Fraga da Pena is the Bronze Age and occupation was relatively short time between the 2200 and shrugs 2000ac., or is about 200 years.
Booty collected in Fraga da Pena
Among the vast booty collected highlight the bell containers, the most important in all of Beira Alta utensils that were used by the elites, sendo object of prestígio.
Were collected in chipped stone tools yet, manual grinders, polished stone axes, a tool in copper and a small anthropomorphic idol.
Function of Fraga Castro Pena
The materials collected, the central location of the site, with huge highlight in the landscape, lead us to believe that the similarity of 's Populated Old Castle (**), Ash in the Numão, would have a special character, contributing to the demarcation and control of the region and to strengthen the identity of the local community.
For those who like archeology and the landscape Fraga da Pena is a must see place.
5 Notable locations near Fraga da Pena
Anta's Slum (*)
Castro de Santiago (*)
Algodres village with its panorama (*)
Set Largo dos not medieval monuments (Aguiar da Beira) (*)
Castle Celoria the Side (*)
Boa Viagem!

Natural Areas, Tourist Guides, News, World Heritage, All articles
11 the September the 20106 from April to 2011

Regions of Portugal, Distrito-Bragança, Ash Sword of the Tape, All articles
11 of March of 2010