Guide to Castles and Town Walls of the line of the river Mondego- Is this all that this remarkable property will be recovered?

The Castles and medieval walls built along the border line of defense of the Mondego River and Coimbra, the most important of the newly created Kingdom of Portugal, were instrumental in the consolidation of the Portuguese nation. These fortifications are subject to extensive refurbishment and disclosure and before moving to the article of Mr. Mayor Penela Let us list the notable castles of municipalities involved.
Medieval Castles and Town Walls of notable boundary line of the Mondego river
– Castle Montemor-o-Velho (***)
– Castle of Soure (*)
-Castle of Pombal (**)
-Castelo de Penela (**)
– Top of Gerumelo and traces of his castle (Penela) (*)
– Castle Arouce and natural and religious landscape at the Shrine of Our Lady of Mercy (Blackboard) (**)
– Medieval walls and towers around Coimbra
Other defensive structures with patrimonial value
– Fortress Buarcos (Figueira da Foz)
– Castro de Santa Olália (Figueira da Foz)
– Fort of Santa Catarina (Figueira da Foz)
– High Castle in Miranda do Corvo)
-Torre de Bera (Coimbra)

http://www.guiadacidade.pt
The Castles and Town Walls of Mondego
"The region, particular territorial influence of arc Coimbra, will make an important and distinctive step towards statement strategic, in this case, centered on their Heritage of medieval.
With the approval of the application to urban networks for the competitiveness and innovation, castles and medieval defensive walls of the ancient line of the Mondego gain new life and allow the creation of a cultural product, tourism and economic involve the territory of Coimbra, Figueira da Foz, Dovecote, Blackboard, Miranda do Corvo, Penela, Soure e Montemor-o-Velho, still having as partners the Regional Directorate of Culture Center, Regional Entity Center Tourism, or Instituto Pedro Nunes, University of Coimbra and the ACIC.
This is an important network of partners who will be responsible for valuing all these municipalities in the Centre Region, its heritage and its history.
The ambition is to create an international brand with a properly structured dissemination project, with quality animation and network, valuing the economy and creativity. 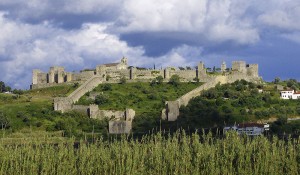 In such a way to combine strategic vision with a network of local and regional partners, fostering entrepreneurship and the dynamics of local base, giving new vigor to urban centers, through a number of projects in each of the cities and towns.
The house in Walnut Penela, the Design in Miranda do Corvo, Tower Anto dedicated to the guitar and the fate, Coimbra, appreciation of the surroundings of castles Montemor, Soure, Lousã e Pombal, rehabilitation of the fortress of Buarcos materials are some of the works that will support this network back to remember the importance of this territory in the construction of Portugal.
They are around six million euros of EU funds, thanks to the efforts of all partners and their ability to create and enhance an ancestral heritage, will be applied in these eight counties in the Central Region.
Knowledge, research and content production objectives are to be achieved, contributing to this endeavor, the added value of having a university like the Coimbra, an incubator of international reference as the IPN, and entities regionais Tourism and Culture that, from cedo, recognized the opportunity and relevance of the idea.
The most advanced technologies, such as the installation of virtual viewpoints in each castle walls and, will also be present, appealing to memory and the mysticism of these beautiful spaces that, so, renew its role in the development of these municipalities in the region of Coimbra and the Mondego.
The challenge is great for each partner. They all gave an excellent example of the ability to take risks and do things differently, starting from a heritage, a strategic idea, partnering, creating knowledge, gaining scale and critical mass.
This example is leads to the suggestion another time and another way of doing in our region ".
Text of Mayor Paul Julius Penela published in the Journal of Borders in 25-9-10