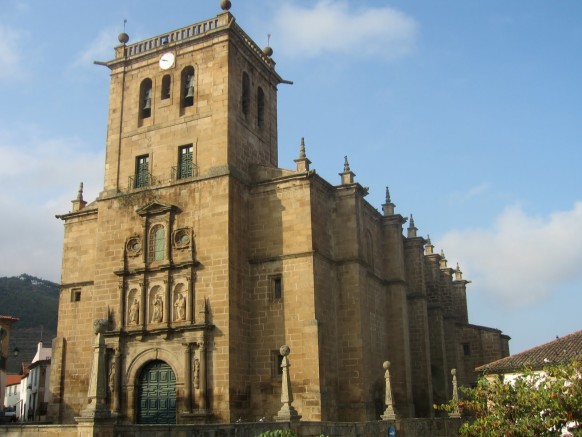 Readers Friends, Tras-os-Montes are not only telluric landscapes, because it also houses a remarkable collection of churches, as for instance the church of Mirandela and even in the same county the Romanesque church of Adeganha (**). A Church of Our Lady of the Assumption, Tower Moncorvo matrix, one of the most beautiful in Portugal in Mannerist style, It stands on the site where once there was the medieval church of Santa Maria. The monument was constructed from 1510 or 1544 and it took decades to build. In 1638 still ongoing works. Imagine the reader the time and effort involved by everyone involved in its construction, architects, masons and the inhabitants, last major public works that would have a huge impact economic partner in the region. 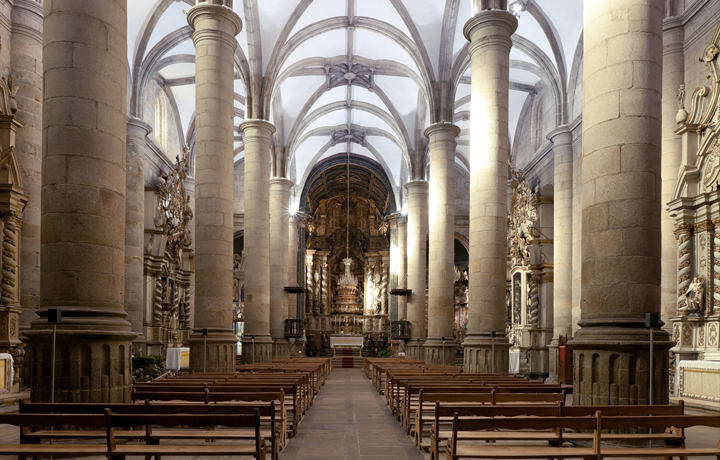 Interior of the church of Moncorvo tower array

“Mirandela, town promoted to the county seat in 1285, by King D. Dinis, It was in the sixteenth century a flourishing town and an administrative center of the utmost importance, fact that led to the construction of a large church, denouncing the secret desire to rise the diocese headquarters. This would eventually be established in 1545, but in Miranda do Douro, in the northeast transmontano, which must have contributed to the slow pace of construction of the Torre de Moncorvo matrix.

Dedicated to Our Lady of the Assumption, have been started around 151, according to a sixteenth witness, Rising, since then, extramural, in the suburb of the village and at the site of medieval Santa Maria. Dependent mainly of municipal financing, the work dragged on for more than a century, working out still 1638 in the large factory yard, not committed delay, however, the architectural unity of the building”.3

You do not know the author traces the church, only the master mason reference João Martins, in 1559, accompanied the work, although the characteristics of the porch appear to with contemporary buildings traditionally attributed to Brother Julião Romero, namely the churches of São Gonçalo de Amarante (*) and São Domingos de Viana do Castelo(*).

“The main monument facade is dominated by the central tower, quadrangular plant and marked by Mannerist altarpiece porch, made arch and flanked by two pairs of columns. On the portal are the S pictures. Pedro e S. Paul that flank the Our Lady of Assumption. Flanking the gate are Santa Barbara and Santa Apolonia. And most of these can still observe an arc flanked by two window glasses. At the top of the tower there are two balconies, above these the bells and also a clock. At a higher level, the sides of the church, are multiple windows and below two Renaissance-style porticos, one on each side”.1

Both the compact look of the exterior, rhythmic elevations of heavy buttresses, as certain decorative details, especially the monstrous gargoyles that break the cornice, reveal a taste of medieval inspiration, but the gradual opening to new artistic languages ​​can guess on the classic cut of the openings that illuminate the ships and sculptural figuration putti that populates the capstone of the headboard. The same style also presents the two side doors, dated respectively of 1566 and 1567. The south portal was, later., covered by a porch, perhaps linked to devotional practices or used as a shelter for pilgrims

The parish church of Mirandela is a perfect example of a church hall The interior of the temple is organized according to the scheme hall churches (church-hall), being the five spans of the vaulted naves of the same height, to divide 3 ships. In its proportions and general provision, the interior reveals the same austerity and rationality abroad, with the long series of spans of the body symmetrically domed church, dome being covered by multiple ribs coming out of eight massive pillars. In the chancel you can admire the great Baroque carved altarpiece designed by the master Jacinto da Silva Braga, that ran between 1752 and 1754, whose design expresses well the scenic quality of the Baroque, in its most magnificent version still heir to the pomp of the time D. João V, with its Solomonic columns framing the Tribune, angels winged in trim and the usual naturalistic ornamental repertoire of vegetal motifs and concheados. The murals of the chancel, already the taste Rococo, are due to the painter Francisco Bernardo Alves, that performed in 1779 with fresh depicting the biblical scenes, including a Last Supper, there are also four other altarpieces in the rest of the temple – the Souls, the Our Lady of the Assumption, the Holy Christ and the Holy Family. 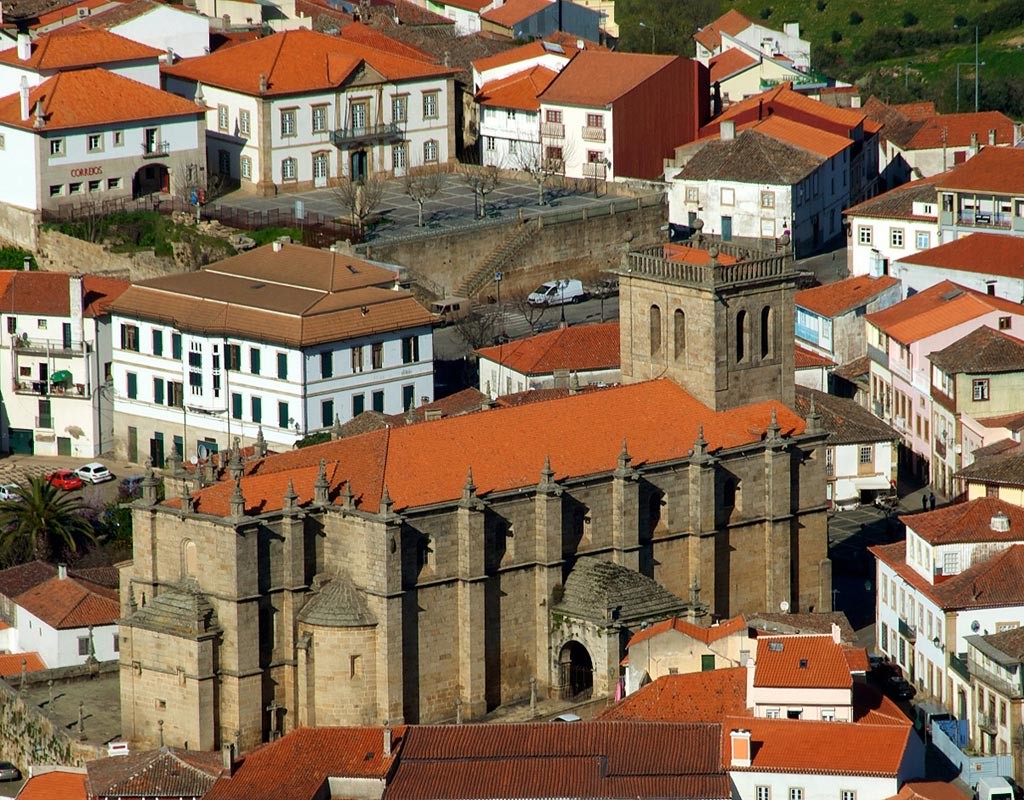 Apses in the head note is also appreciable carving sets: the right hand of the chancel (side of the Gospel), in the Chapel of the Wounds, a baroque altarpiece “national style”, modified by additions and Rococo - which seems reuse gilded rococo elements, probably disappeared from the S Convent. Francisco.; left (side of Tablet), the Chapel of the Lord or of the Blessed Sacrament (*), an interesting mannerist altarpiece, wooden, revealing a naive but imaginative sculptural work, perhaps the work of a local artist, notable for force, scenes representing Christ in the Garden, the Flagellation of Jesus, O Hecce Homo, Jesus before Pilate In most learned clipping is the magnificent shrine for it framed, also the same style. The assembly is guarded by a wrought iron railing, dated 1631. In the chapel of the Blessed Sacrament there to emphasize a Flemish triptych, we'll talk later. No high choir, which is an intermediate floor of the tower, there to enjoy a superb pipe organ, dating from the eighteenth century. Another notable modern campaign was the one that led to the side altar in the nave of the Gospel, seventeenth century, and panels depicting the Passion of Christ ".

Also the seventeenth century is the altarpiece of the sacristy, which existed before the body of the church. The remaining altars are from the eighteenth century, as the imposing body that is in the high choir.

Greater even than the cathedrals of Miranda do Douro (*) or Bragança. The first impression we encounter when getting off the square matrix is ​​the verticality and monumentality of the temple. Inside the feeling of spaciousness and height keeps the exterior impression. The large volume marks the silhouette of the old hull wherever observe. On the scale is majestic, worthy of a cathedral, and may have been built with this purpose, since in 1617 asked the King Philip was the division of the Diocese of Braga and the creation of a bishopric established in Moncorvo. This would never happen because in 1881 the parish would integrate the Diocese of Bragança. But we have to note that the church was built from 1510, before this request.

The Council of Trent and the church of Torre de Moncorvo

Council of Trent, made of 1545 a 1563, the Catholic Church. He was summoned by Pope Paul III to ensure the unity of the faith and ecclesiastical discipline, in the context of reform of the Catholic Church and the reaction to the division then lived in Europe due to the Protestant Reformation, why it is also called Council of Counter, also in its genesis was the regulation of lust and excessive wealth, that existed at the top of the religious hierarchy, bishops, cardinals and even popes, but not everything was negative because some of these princes were patrons of the Arts, but we will go back to the mother church of Torre de Moncorvo, whose construction is fraught with the Tridentine spirit, what makes us think since the first stone was launched in 1544, reigned Dom João III, this this artistic style associated with counter-reform, existed before this, or else the church had a distinct initial project, More Renaissance and that during this building has been changed.

The small can also be a work of art as shown in the Church Moncorvo Tower matrix.

But the most beautiful work of art is the small triptych of Gothic polychrome wood (*), dedicated to Santa Ana, one late Gothic triptych, representing various steps of Santa Ana's life. Executed in Antwerp, by volta of 1500, figures presented in inset, Polychrome where you feel the breath of the Renaissance, setting with intense expressiveness and delicacy: one is the Prophetic Revelation of an Angel and the San Joaquin encounter this with the Wife Golden Gate of Jerusalem; Wedding of the other S. Joachim and the future of the Virgin Mother; other Presentation of the Child Jesus by the Virgin to Santa Ana. It follows that small is sometimes the most beautiful.

2) Photos taken from the North Culture.

A comment Church of Our Lady of the Assumption-matrix Mirandela (**)- I knew…is one of the most beautiful monuments of the Portuguese Mannerist style?