placed 18 de February de 2010 by Castile
«This road will give the Village of Stephen, and then Cardanha Adeganha. The traveler can not stop everywhere, can not knock on every door to ask questions and to heal the lives of those who live there. But do not know how or want to detach themselves from their tastes and has the fascination of the work of men's hands, goes up Adeganha where he was told that there is a precious Romanesque chapel, so this size. Go and ask, but rather amazed with the huge and unique granite slab that makes the square, threshing floor and bed moonlight in the village '.
José Saramago « Journey to Portugal »
Adeganha in the county of Mirandela, is a typical village transmontana (lost in time, but not in the geography of "Portuguese soul"), located in cold and arid plateau to the west Trás lurks the vast expanse of Vale to Vilariça (**). About, the piles of rye, the olive trees covering the hills, Curled to penedia. In small rough stone buildings-whether the caution sheep and cereals, granite and is tapped into walls or floors shall make the tents where.
In addition to the relics of coeval transmontana architecture, still has the second most beautiful Romanesque church transmontana (the first is for me the Church of San Salvador Ancients (***)- and this simply a portal and landscape).
A St. James Church of Adeganha was built in the thirteenth century, a few seconds, or in the twelfth century, as stated by the Abbe de Bacal. Dedicated to the Apostle and said originally equipped with an outside porch to house pilgrims, she stood in the roads to Santiago de Compostela. Your portal belongs to the transition between the Romanesque and Gothic. 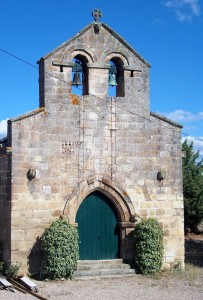 The bestiary of corbels is of great sculptural quality and look sharp, Worship and imaginative you can spend some time trying to uncover their meaning.
A main facade of the church headquarters Adeganha, facing west, stands towering, pair of window. The main portal foreshadows broken rainbow gothic style. Has two Archivolts phytomorphic with decoration based on pedestals with anthropomorphic heads, over the Templar Cross. Three strange female figures in low relief, the Three Marys (Three Sisters, Three Wives) break the ornamental facade of frugality, these were immortalized in a strange legend. The middle one is giving birth, assisted by a midwife? It will be a symbol of fertility and camaraderie? If so how far we are the flames proclaimed the legend (some lines over the front and the legend is narrated, patience). The other sculptural group is smaller and is a man with two objects on hand that resemble two scrolls. Mean an invitation to contemplation and prayer? More ... outgoing e com os testes?
In South facade there is also a man with a flexed knee, lifting-is. Has open arms and each hand holding an object. The level of your chest a female figure, lying? Is life, sun, pleasure, a primavera, or will before death, a lua, the suffering of the soul and the wintering?
Also north facade has a brother looking ahead and holding a book – the Bible? Beside supporting a pedestal, like the weight of the world, female figure with a strange grimace of suffering, with eyes and mouth closed, as giving birth. It will be a call for penance and sacrifice, required of individuals of the medieval world?
Under the two tombs arcosolia to remind them of the inevitability of the finitude of existence.
Interesting elements are the cachorradas that appear on the side facades representing signs as disparate as, canids, triangles, faces of man and woman, poultry, bovine…
All these cryptic symbols were created and understood by the medieval mindset Man. For this and other I like the Romanesque, the more earthy architectural style and for me a true state of sublimation.
The inside the Church of St. James the array Adeganha single nave, good fresh preserved sixteenth-century, to recall in a way, the next chapel of Our Lady of Teixeira (Açoreira) or distant Church of St. Isidore in March Canavezes (*), some of them were recently discovered and restored.
It is of great beauty the huge St. James, surrounded by jagged frame lozenges and friezes of stylized geometric and plant motifs; who have been so good artist?
The theme is obviously hagiographic, emerging, referred to, Christological themes, ending at Calvary on the triumphal arch, this overcast for conservation reasons, see also San Antonio, the Magi, objects of torture of Christ ... these are valuable sixteenth century murals.
The altarpiece, Baroque language, integrates two paintings on wood, sixteenth century, representing St. Lawrence and St. Martin, that have belonged to an earlier altarpiece and which, during clearing, parts that have been recycled for actual.No altarpiece altarpiece were found to find boards “Sao Martinho” and "St. Lawrence", oil paintings on wood attributed to Brown and Manuel Vicente Gil Vicente, respectively father and son, termed as masters of Sardoal (because it was here that first identified and studied). Painters who were active in the reigns of John II and D. Manuel and I are the main representatives of the painting Manueline Coimbrã. Inside dim, without rosettes or cracks alumiantes, are not yet apparent signs of "Three Marys". Then go to his legend.

[nggallery id = 2]
"The story goes that the Three Marys were sisters and pastors. Went to the Mount of Fray Live, monte bison, executioners, sobreiros and broom grass, graze cattle. While cattle grazed, they entertained themselves playing cards. But one of the three sisters always won and there was no way to make losing, the other two were eaten up with envy and intrigued – Was she Witch? Or what would be the work of Heaven? Neither one nor the other. She always won because they played with morning.
Finally found the other two combined and revenge. They made a great bonfire, with plenty of firewood, and pushed the fire to cheating sister who stayed there burning with large flames. If trying to leave the other two did not leave and with fingers in “figas”said: Flames and win! Flames and win! And so was the name of Ard and Win, Adeganha "1.
Strange legend, remember the times of intolerance, materialized during 3 centuries the Portuguese Inquisition and that was one of the darkest chapters of our history, the institution still has an impact on our atavistic way of being and doing.
To not finish the visit to the chapel of a sad mood, and not lead readers to feelings of guilt birth, back to finish, to an author who makes us proud and we've been here too.
"Anyway, the church is this. No exaggeration fell in whom boasted. Here these heights, with sweeping winds, under the chisel cold and sunny, the templozinho heroically resists the centuries. Broke up her edges, lost feature shown in the figures all around cachorrada, but it will be difficult to find highest purity, more beauty transfigured. A Church Adeganha thing is to have the heart, as the yellow stone of Miranda”.(José Saramago, “Journey to Portugal” )
Personal note: Here was the first time in the early 90, then was on a study trip geology, always oriented with great wisdom and joy by Dr. Luis Conde Nabais. Thanks for the old days.
Sources of Information: Sites www.adeganha.com and www.monumento.pt. "The Church of Adeganha", The legend was removed from the Hot Earth (Item 15-3-2005)

Some are photographs were taken from the slideshow Discover Moncorvo .