Old church and cloister of the Monastery of Jesus (***) (Setúbal) (1Part) 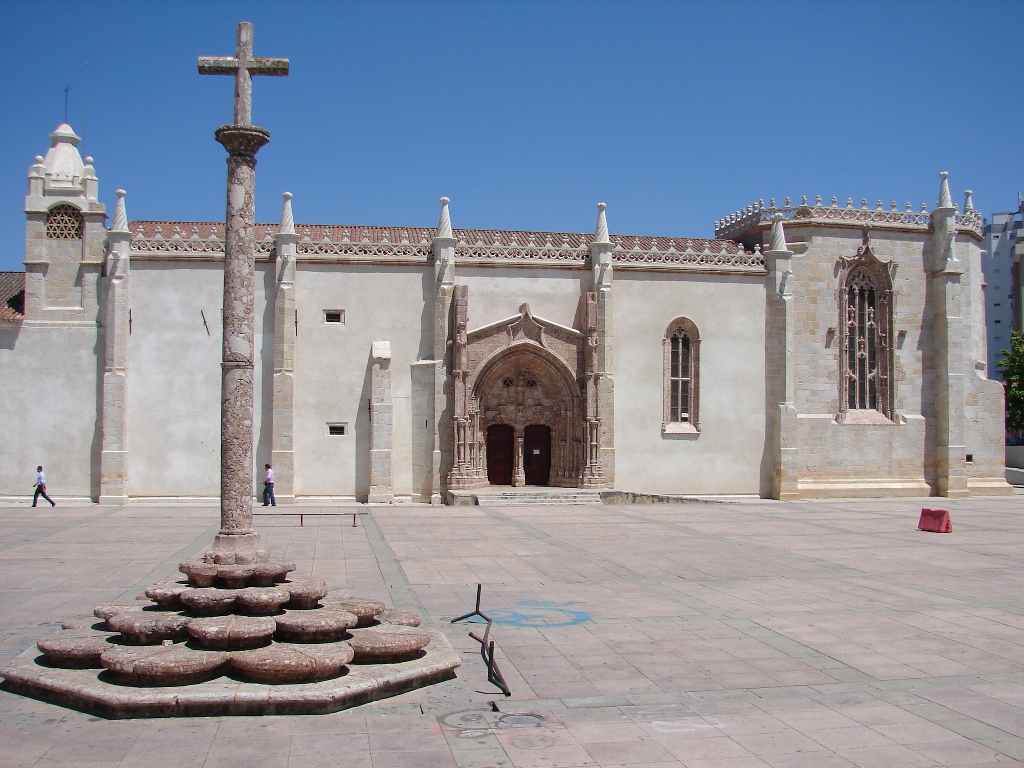 A church of the Convent of Jesus with its cloister (*) e museu (**) is the most important monument in the beautiful city of Setúbal and one of the landmarks primatial style that became known as "Manueline".
The Convent of Jesus of Setúbal was founded by the love of D. Manuel I em 1490 (when he was only Duke of Beja and administrator of the Order of Christ), for use of Poor Clare nuns cloistered, who would live according to Franciscan rule. "It is the King John II who in the following year, after a visit to the works, bear the cost of the same and have considerably expand the initial project (with new foundations and second foundation), delivering the conduct of the work of Diogo Boitaca, who here performs his first job in the country. This master was a key driver of the style that would designate the nineteenth century by "Manueline".
"The first head of the church was completed in 1495, upon the death of D. João II; the body was completed shortly after, already relying on the patronage of D. Manuel, determined to be erected three vaulted naves, instead of the projected nature with unique wooden ceiling. The occupation of the adjoining convent by St. Clare, mid- 1496, attests to the rapidity with which the work progressed, although the Johannine bedside has yet been remade, to be considered too small, in the first decade of hundred.
"The whole convent stands in what was then the area outside the walls of the castle, as mendicant habit of buildings; its facade received considerable gentrification with the donation made by D. Jorge de Lencastre, bastard son of D. John II and Master of the Order of Santiago, the extensive land borders, in the first half of the sixteenth century, where he built a cruise .1 "
The facade has lacy Manueline spiraled pinnacles and parapet, based on buttresses that help support the walls of the church and at the same time provide some aesthetic. The facade still has, one big window in the nave and another, larger and much decorated, lighting the chancel, both Gothic-Manueline portal and. 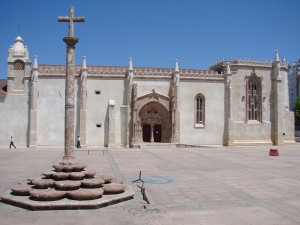 Portal of the Church of Jesus (*)
Between two buttresses rising entered the portal on gablete, facing south which is rich with symbolism. It is formed by ogival Archivolts with canopies and framed by two buttresses decorated with Gothic motifs, aedicules addorsed and thin columns. Here were pictures, already disappeared (perhaps the apostles, responsible for spreading the message of Christ). If you have some time to discover one of the capitals 5 besantes, both refer to the royal shield as for 5 wounds of Christ (Franciscan symbol) and other two capitals, a rope (Franciscan cord) and a chain (synonymous with closure). Notice also the 12 yotas that come in archivolt referring to the abbreviation of the name of Jesus or even the name of the maid of Don Manuel-Justa Rodrigues. More obvious are the two alphas in the eardrum inserted into hollow glasses. Second interpretation of Fernando Baptista Pereira this set of letters symbolize the three parts of the Trinity. Thus the alpha correspond to the Mystery of Creation, in other words, God, the yota to the Mystery of the Incarnation, in other words, Jesus the Son, the circle and the Holy Spirit. This symbolism would repeat the three spheres which stain the parapet of the church and the three logs of magnificent columns (*) rolled on whether, in other words, forming a single column, thereby demonstrating the dogma of the Trinity, An e Trina.
The Interior of the Church
The church has three naves, covered by domes half-crib, which amount to the same height, is therefore a church hall, are as Church of the Monastery of Jeronimos (*****) ou a church of Mirandela (**). The church was the first church-hall erected in Portugal. The six twisted columns (*), em breach of polished Arrábida, that support the dome are admirable. The six columns may represent the six days of creation and the three strands of each column, as mentioned the Trinity.
The chancel of the Church of Jesus (*) 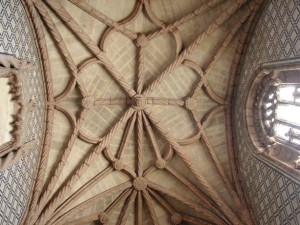 The chancel is covered by tiles of window and it was installed, in 1520-1530, an altarpiece painting (**) – regarded as one of the most remarkable collections of Renaissance Art in Portugal – that is exposed at the Municipal Museum of Setúbal, Annex to the Church.
The chancel is taller and has a wonderful and complex ribbed dome curves to establish a quatrefoil- ie a flower 4 petals, containing cross; the flower can represent Jesus and the cross where the object was crucified.
The works take a long time because the windows were only placed in 1539. Not neglecting the possibility of having been built by the same masters Jeronimos Monastery.
In vault highlights the set of Mudejar Sevillian tiles manufacturing. 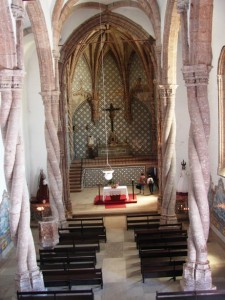 Are very important in the whole church decorative elements made even with late-gothic taste, but already showing an exaggerated naturalism, more filled with spiritual meaning: is the case tubal angle of the chancel, the parietal tabernacle niche, the niche of the altar and sacristy window blind in the chancel, is the dawn of manufacture.
The cloister of the Convent of Jesus (*)
O claustro (*) which is not visitable except for occasional events, is large, with two floors and arcades with pointed arches. It has a square toilet consists of twin arches and columns based on oitavadas, the dome is flat with large keys, being very thick ribs. The columns have capitals with vegetal decoration artichoke, vine and grapes and corbels with good sculpture of human heads.
Tile panels of the nave of the church of Jesus (*)
The artistic quality of these blue and white panels is average and its visual impact escapes the first notice of the unsuspecting tourist, dazzled by example with twisted columns or the Dome of the chancel, However, the set of panels is one of the most remarkable and unusual sets of tiles historiated eighteenth century depicting steps litany of the Virgin Mary. Baroque tiles depict allegories of some cryptic form based on a picture book devotee of the time-"Mariana Praises" A. C. Redélio. Two 12 all of them deserve our watchful eye, described in simplified form only one of the Turris Eburnea. Here is shown the Virgin and Child seated on the back of an elephant trampling a dragon while Christ expelled from heaven the angels of evil; the distance we see the representation of the Tower of Babel symbolizing Litter of Humanity. The panels run after earthquake 1755 were 25 however the General Directorate for National Buildings and Monuments, according to the taste of the time the church was the target of a purist restoration brutally removing the missing panels. 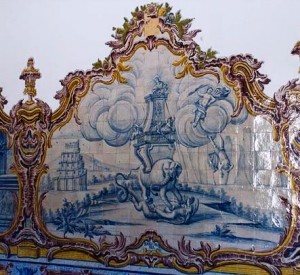 These panels, still abound, are spectacular for its complexity and symbolism and were inspired by the Bible, in the symbolism of plants, the exoticism and why not say it, Also in alchemy.
The decor and architecture Convent of Jesus is really unique and definitely helped to launch the "fashion Manueline".
Can not fail to also visit the Convent, in the old dependencies Museo Municipal de Setúbal which houses an extraordinary collection of Portuguese painting panels (**) signed by Jorge Afonso. How long will the item already have a sequel, because these paintings deserve our attention, my and your, because here eyes satiate yourself.