Altarpiece of the main chapel of the Church array Escalhão (Figueira de Castelo Rodrigo) (*)-Did you know ... here an unusual Christ observes his twin brother on the way to Calvary?

The county of Figueira de Castelo Rodrigo has three notable churches: a church of the monastery of Santa Maria de Aguiar (**), the church of Escarigo, with its chancel (*) e a church of Escalhão or Church of Our Lady of Angels (*) which we will describe.
To Igreja Medieval já continue restau, in its place was built in the sixteenth and seventeenth-century Mannerist this monumental church, enjoying some stones of the castle has disappeared.

It was during the reign of D. Dinis who built the castle Escalhão, which like all other castles Raianos aimed to strengthen the defense of Portugal against possible assaults Castilian. It was this time it was built the parish church of the village, there by the year 1320 news of its existence.
However, this medieval temple little or nothing remains, since its structure was completely rebuilt in the sixteenth century. The sixteenth-century temple is composed of the rectangle of the nave and the rectangular body of the chancel, to which adossaram dependencies church.
The facade and the temple are austere exteriomenente. This sixteenth-century church fortress type features a classic portal with simple decorative elements. It has in the chancel, paneled vault and baroque gilded notable.
No inside, the ship of five sections is covered by a vault painted stucco. On the side walls were disposed altarpieces hoist seventeenth century, It is the side of the Lord Gospel Chapel Steps.
An episode of the War of Restoration
Outside the ornamentation is simple and great sobriety, the walls having, signs of damage caused by the Spanish artillery during the war of restoration.
In 1642 the Duke of Alba reenters the Border with a powerful army, destroying several villages.
"In 17 October of that year he returned to Portugal a Spanish army commanded by renegade Portuguese João Soares de Alarcão, with 4500 soldiers and 400 Knights. The villages we passed were plunged in grief, destruction and ruin.
This military force continued its destructive path through the county going forward takedown is the fortified walls of the church that had two Escalhão ravelins, already disappeared, a defende-la. The population, aided by a small detachment of 35 soldiers, under the command of John Doe Brake, prepared to face the enemy. Judging that the prey was easy, the invader undertaken against defensive stronghold. But the escalhonenses defended themselves heroically decimating fire with clenched Spanish soldiers. In the second round, protecting themselves with all kinds of materials found, the enemy attacked again. The church was the main target of artillery shells. Women with blankets soaked in an existing well in the church extinguished the fires caused by the bombs. Tissues with various bandages that were used for the wounded. Inside the temple the dead and wounded testified to the hardness of combat. 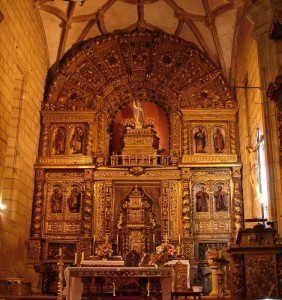 Tradition tells us that a man named Janeirinho killed the captain of the Castilians at the entrance of the false door. Captain Zamora lunged at the door screaming: "Viva Captain Zamora". From inside replied Janeirinho: "Viva Janeiro with their fucking", while tucked the clapper of the bell on the captain's head. The enemy troops, already quite weakened and surprised by the resistance, panicked when they saw one of their chiefs dead. Taking advantage of this moment of hesitation the Portuguese left the temple and advance against the Spaniards began to retreat leaving their positions. In a place called "The Veiga of the Dead" and the enemy stopped, reorganizing, tried to take the offensive, but nothing worth your effort. The Portuguese pointed on them the artillery pieces captured and almost decimated " 1.
The remarkable altarpiece of the main chapel (*) Church of Escalhão
The church interior is wide, warm and harmonious. But what holds our gaze, the background is the remarkable main altarpiece (*), seiscentista, coated gilded woodwork beautifully crafted, Solomon columns and with a composition which fall beautiful pictures with a holy aedicules.

The altar carvings built in the sixteenth century campaign was run about 1525 by Henry Fernandes and oak Arnao this set remaining two panels embossed carved, representing the Calvary e a Deposition at the grave . This altarpiece was replaced in the seventeenth century by a Baroque carved altar built in the eighteenth century, integrating throne and figure sculptures.

“The main altar, altarpiece with rich two-story gilded supported and framed by Solomonic columns every six spirals, It is the "national style" of the late seventeenth century and beginning of the next, as shown by their mannerist elements together as many baroque. About entablature dominates the image of Orago, Our Lady of the Angels. At the top level, close to the Divine, Line up the images of 4 prophets (Isaiah, Jeremias, Ezekiel and Daniel) pointing out the Old Scripture or Ancient Tradition (patriarchs). At the lower level, next Humanity, It is the feature 4 evangelists (Mateus, John, Luke and Mark) represented the New Scriptures or New Revelation (apostles). But the most interesting and unusual of all that is in this church, are two lateral reliefs, altarpieces of the Flemish style of the sixteenth century, representing Jesus on the way to Calvary and the deposition of Jesus in the tomb, that refer without delay to openly heterodox interpretations of Christian Hermeticism, and clearly heretical to Catholicism confessional, opposing the two way of displaying the same thing.

What is more, Jesus Christ and his twin brother this commendation of the Order of Christ?

As mentioned here are two interesting sixteenth century panels embossed Flemish inspiration representing the deposition in the tomb and Jesus' road to Calvary. The latter, beyond beautiful, brings us to a probable heterodoxy, as a Christ observes his twin brother on the way to Calvary!
Another heterodoxy is inside the sacristy a fresh parietal poor, is visible where the Virgin Mary breastfeeding two boys; we are again referred to the dual and alternative nature of the different streams of Christianity.
This church being a lucrative Commendation of the Order of Christ and because of the proximity of the Templar Chapel wolfswood, these marks were related esoteric remnants of the Templar Order?

“The presence here of this costume hieratic leaves understood that the censors of Trent did not reach Escalhão, or perhaps they were prevented from reaching for some ecclesiastical authority, possibly the very Archbishop of Riba Coa, António Pinheiro da Fonseca, family of Pinheiro da Fonseca who built this temple and whose coat on top d'armas its main entrance. This may explain the contract established by the Church of factory, but under seal of the Order of Christ grantee of this old commendation, with the Luso-Flemish or Arnao Arnao de Carvalho (1506-1533), who was the master carver of the altar-largest church in this 1524, pairing with the master gilder Henrique Fernandes, renowned artist Viseu. Arnao de Carvalho, as many Flemish coming to Portugal, would certainly not oblivious to the "heresies" current at the time that lined the so-called Renaissance Hermeticism. He had come here after notching work he had done in Ash Church Tower and before the Lamego Cathedral, and hence he went to Santiago de Compostela where accomplish other works in the capital of Galicia churches. After, yet this church escalhense, continuing the program illustrative master Arnao, Cool the sacristia were performed in 1761″.

A beautiful story of desire for a good time in childbirth
Here in Escalhão, there is a peculiar, spiritual and poetic way of begging a good time for the expectant mother when the apparent conditions indicate possible difficulties to birth. Seven young virgins, Marys all of their names, climb the bell tower of the parish church and spaces allow time, each strikes a blow. And every touch is a sign to those who listen to pray a Hail Mary to ask Our Lady to intercede for the happiness of childbirth. It is certainly, a beautiful church prayer. Now fallen into disuse, pray for his return. Although we know now that deliveries are made in Covilha! Another problem is probably the existence of seven young virgin Marys in Escalhão…because the Portuguese state has done everything for all this beautiful interior of Portugal become desertified.

“This popular tradition will have a medieval origin and be inspired by the epic poem Psychomachia, of Prudencio (348-410), Latin Christian poet, which was the most widespread in the High and Late Middle Ages, including staged as a moral battle of the Soul (psychomachia) divided between virtues and vices[22]. The seven escalhenses virgins represent the seven virtues, by degrees or steps, go up to high heaven of approaching the ultimate manly touch of clapper that vibrates the Paradise portals and full of grace will. It is an expectant present moment of a happy future realization. The seven virtues (power) traditional, are: chastity (control;) opposite of luxury; generosity (generosity) opposite the greed; temperance (Restraint) oposta in throat; diligence (diligence) opposite to laziness; patience (patience) opposite to anger; charity (Humanitas) opposite to envy; humility (low) the opposite superb. Such virtues took shape in the recognized prophetesses women sybils for the Church, predictors of Advent to whom heterodox hermeneutics - including giving them as human expressions of the seven sidereal Mamas, Krittiks or Pleiades, stars of this constellation configured as progenitors of Kartikeya, the Paladin or Celestial Warrior both associated with Kalki like Maitreya by the eastern, in the West recognized Christ Pantocrator, "Almighty" - has in the deepest plan or esoteric Spiritual Tradition, they also being expectant of a future time of God and view, or Divine Idea output delivery of a new and wider awareness on Human Gender”.1

2 Comments Altarpiece of the main chapel of the Church array Escalhão (Figueira de Castelo Rodrigo) (*)-Did you know ... here an unusual Christ observes his twin brother on the way to Calvary?