Panorama of the Church of Olhão (*)

Olhão maybe it's not the island "Cubist" that enchanted Aquilino Ribeiro as described in the book of Guide to Portugal (1927). But if you climb the church tower aa array of Olhão will see that it still has the attractive.
The courage of Olhão marked the history of Portugal
Once there, you know the bell- and until you can afagar- entered history, because it was associated with a great epic of Olhão, the first successful uprising in Portuguese territory against the French and the trip to Brazil to inform the royal family of the expulsion of the invaders.
The uprising took place when the Registrar of Maritime Compromise, on 12 June 1808 uncovered, and Matriz, real weapons that the invaders had sent hide.
The revolt blossomed on 16, when Colonel José Sousa, to see the people read the notices that appealed to the Portuguese to help the French against the Spaniards, reacted tearing the edict, act applauded by the population then hoisted the national flag and rang the bells rebate, inviting everyone to take part in the fight.
He started the revolt that materialized on 18 June, when the people commanded by Captain Sebastian Master, defeated the French forces, a first confrontation by sea and then by land, Olhão in the bridge and the Half Légua. 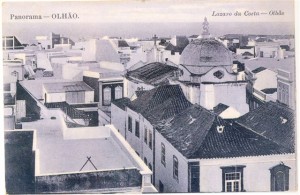 Only after confirmation of win, resulting from the decision of unwavering olhanenses is that powerful, always parasitizing other even stronger, constituíam that the regional administrative power, joined the winning population, spread the revolution to the entire province and together, small and large, expelled the invaders then Kingdom of the Algarve.
But the feat did not end here, because again, Olhão fishermen in a small boat named Bom Sucesso, captained by grommet master crossed the Atlantic Ocean, demanding to Brazil, to inform the royal family made. Made by such small fishing village was elevated to Vila.
Aquilino Ribeiro and you see the tower of the Church of Olhão
From above, the outlook is very beautiful. Here you can see from left to right, the magnificent Quinta do Marim (**), sede do Natural Park of Ria Formosa (****), the commercial port and the distance to Ria Formosa, with two barrier islands: a Breech-Island Lighthouse (**) and the paradise Deserted Island (***).
The urban landscape we stand the new road overpass, saline with their pyramids níveas eclipsed the sun shine. And after the elegant facade of the house of Commitment with its roofs Scissor (ancient brotherhood and mutual aid association of fishermen and sailors), the neighborhood of fishermen, already changed and surrounded by buildings descaracterizadoras, but that still keeps the Cubist and Moroccan suggestion that snatched the giant Aquilino.
"Dum building to another, the flat roofs and facades overlap is, It is acavalam, overlap, disarticulate up, canceled by the whiteness and the mirage the laws of perspective and volume. Thousands of cubes in unstable equilibrium, paradoxical, absurd, as stonework of Babel juncando a shallow field. E todavia, this seas plans and this fanfare endiabrada white, a sense filtered purity, auroral bathroom, reascende as the perfume of a flower bed of lilies. And will be read, the view of the estuary, Sun azul ideal iluminura, across the sky in a vaporous diafanidade, where evil is aguentem white clouds, and that white dais, escapement to the most unbridled imagination ".
Faced with such words, I do not know what to say, of, I can not forget to say Raul Brandão also wrote beautiful words in "Fisherman" on the labors of olhanenses; and after reading, or better to see the neighborhood fishermen above, come on down and stroll through streets almost Maghreb, topped terraces of houses with, that engender a maze of streets and alleys. And note that in the words of Raul Brandão "this man is a man apart in the Algarve", because it will?