Built in the sixteenth century, a church of Vila Nova de Foz Coa e o Pillory (*), both located município do not miss, constitute an optimal set of Manueline.
A church of Vila Nova de Foz Coa was profoundly altered in the following centuries, retaining only the style of this beautiful portico; perhaps the work of some of Arrudas, who at that time worked in Six of Guarda (**) and the building of the church of Ash-de Espada à Cinta (*).
The church has Castilian influence, as seen in the crowning with three Ventanas, to house the bells and platibanda Renaissance. The wall can be seen five figures of Renaissance style, Embossed, out of frames.
The remarkable Manueline portal of the Church of Vila Nova de Foz Coa (*), naturalistic bias has, arc with five Archivolts decoratas with rosettes, palmetas, scallops, strings, fleurs-de-lis cogulhos, jarrões, Heads of Angel, arabesques and medallions. The arch is surmounted by a statue of Our Lady of Mercy or Pranto, Stone Ançã, flanked by two real shells and two armillary spheres. 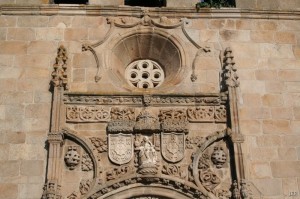 The interior of the mother church of Vila Nova de Foz Coa is also interesting, with three naves with 4 torais spans divided by four arches which rest on uneven and inclined columns due to earthquake 1755, due to the proximity of the fault here has Vilariça accented havoc. Also has paintings on the ceiling and coffered the chancel. The altars are Baroque gilded woodwork.
The imaginary deserves referencing a Pieta seventeenth century, discover that no high altar, and a sculpture of the Lady of the Rosary of the sixteenth century, placed at the side altar on the Epistle side. In painting highlights is a triptych painting sixteenth, on wood, with three invocations of Christ's Passion: Jesus on the way to Calvary; Jesus on cruz; descida Cross, in beautiful violet tones. The rich heritage of the church was looted during the French invasion. 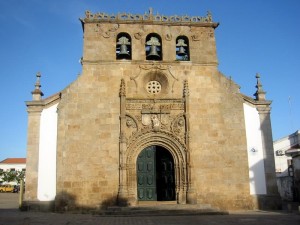 If you visit Valley Archaeological Park Coa (*****), Heritage Humanity, take a moment to visit this beautiful set (church facade and pillory) and think how it was possible, This style invented by us and promoted by kings John II and D. Manuel, take so little time (between 1480 and 1550), forever marked, with beauty, strong naturalism and symbolism, our territory.
Image credit: Are removed in this forum
Boa Viagem!