Mozarabic Church of St. Peter Lourosa (Oliveira do Hospital) (**)-It is a symbol of religious tolerance bequeathed by Islamists

A church of San Pedro de Lourosa has great importance, historic and architectural, being a 5 pre-existing Romanesque churches in Portugal. The rest are the Chapel of Saint Gião (Nazareth) (**) Church of San Frutos of Montélios (Braga) (**), church of San Pedro de Balsemão (Lamego) (**) and the basilica church of Idanha a Velha.
A church of San Pedro de Lourosa as built in culture Mozarab, characterized by the use of horseshoe arches based on smooth columns.
A tombstone lying on the lintel of the church date from the year 912 the Christian era.
The Interior of the Parish Church of Lourosa
It is unusual for the frontaria Church Lourosa because it shows a clear influence of Roman architecture, with its round arch, perhaps inspired by the monumental arch of Roman ruins of Bobadela (**) not far away.
The church is preceded by a large narthex which gives access to the nave.

The interior is 3 ships, separated by horseshoe arches-Moorish architecture. The central nave is wider and taller than the sides and transept is slightly protrude from the outer walls of these. The headboard is made of three chapels.
The walls are high and smooth, the low lighting and a massive structure resemble the architecture asturariana and somehow the enigmatic "basilica" of Idanha-a-Velha.
The shadowy light due in part to two stylish azimezes, or double windows, located at the top of each wall of the top, typically pre-Romanesque.
In its construction materials are lying Roman stones, visigóticas ou moçulmana. 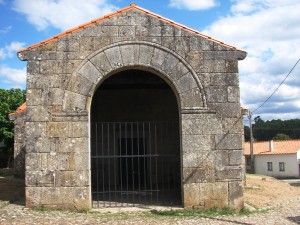 The images are in altars also have quality, all in limestone and painted Ançã school of sculptors of Coimbra. The most interesting is St. Peter (fifteenth century).
Slightly away from the building stands a bell tower that was built in the fifteenth century, Annex church, having been removed and put in place where when the restoration work in the twentieth century.
A pia baptismal, is still of great- typical of the Middle Ages, being excavated in rock outcrop.
Whether inside, or outside we can find several rock tombs. 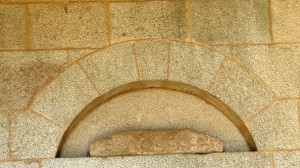 And now I question it, ever visited one of the most important of the Iberian Peninsula, in addition to being an invaluable historical testimony of Mozarabic architecture, symbolizes the first architectural explosion of Christianity in the lands occupied by the Muslim world and that translates into a free respect for the Christian religion? Here culture and power was Muslim, but nevertheless were sufficient to allow a Christian temple tolerance. Such tolerance was not observed after the Christian reconquest under the same Muslim religion. Ultimately, can be annoying advocating causes that haughty judge.
“A thousand years have done certain Church Lourosa on 1 January 1912! Thousand years should crown protect you and your eternal youth”, can be read on a plaque affixed to the churchyard Lourosa, for then it continues to be a symbol of religious tolerance among people of good will.
Source of Information: It may come some pictures of reconstruction that occurred in the twentieth century:

2 Comments Mozarabic Church of St. Peter Lourosa (Oliveira do Hospital) (**)-It is a symbol of religious tolerance bequeathed by Islamists