placed 3 the September the 2011 by Castile

Church of St. Anthony of Groves (Coimbra)- Highlighting its sacristy

Did you know that the ... Church of St. Anthony of Groves Coimbra where Fernando was transmuted in San Antonio?
A Church of St. Anthony of Groves rests on top of a hill where formerly stood the small hermitage of Santo Antao, Dona Urraca donated by the Franciscans em 1217.
Before departing for North Africa on a mission of evangelization was the church of Santo António dos groves in 1219, the five Franciscans who were to be beheaded by the Sultan of Morocco- these would become known as the 5 Martyrs of Morocco. In 1220 reached Coimbra mortal relics of the Five Martyrs of Morocco who were to guard the Monastery of Santa Cruz (***) which can still be found and can be venerated (there is also a remarkable Ark-Relicária Martyrs sent to the Monastery of Lorvão (**) to receive some of the spoils and that is in the Machado de Castro Museum today (***)-read it here). 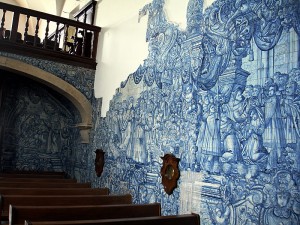 This episode has indelibly marked the life of Fernando Bouillon, Cruzio scholar monk, Born in Lisbon, making him ensnare the spirit of evangelization and Franciscan poverty, if collecting in the Hermitage Plantations of Coimbra - so was born in Santo António Coimbra. After a short stay at the hermitage leave for Morocco (continued tree).
Soon after the death of António, spent only 11 months, holiness would em 1233, the faster process of canonization to date. It's with his canonization in 1233 it's changed the invocation of this temple, thus no longer be dedicated to St. Anthony to be relied on our holy.
In 1247, Franciscan friars leave the church of Santo António dos Groves, perhaps by as much hassle popular pilgrimage, and wishing bonanza, are installed in the Convent of San Francisco Bridge, in Santa Clara, along the Mondego river flooding due to indomitable, in the sixteenth century was abandoned and became the new convent of San Francisco (now being targeted for redevelopment -read it here) the base of the dolomitic hill of Mount Hope is located and where the Monastery of Santa Clara to New (**); the convent of St. Francis of Ponte nothing exists. The church of the Holy Groves would be delivered to fit the Old Cathedral of Coimbra.

The church of Saint Anthony of Groves keep it to be a place of pilgrimage to St. Anthony. The set was expanded in the late fifteenth century, as a consequence of the growing cult Antonian. The Church of Santo António dos Groves was to occupy roughly the time they currently have. 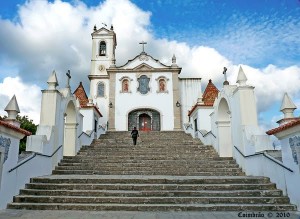 In the sixteenth century the church becomes the possession of the Capuchin Franciscans. These friars in 1673 reedificam St. Anthony's cell was adapted to the Chapter Hall which is now a small chapel with a Gothic portal, which serves as a mortuary chapel, Here are the beautiful Moorish-style tiles. Also build a modest convent residence, the site now occupied by the cemetery, getting cloister within the current church yard.

In the eighteenth century they became major works: Modified the front of the church, sacristy, gantry and access staircase and its side chapels.
In 1835, one year after the termination of the Religious Orders, the church and the convent were sold. On the night of 10 November 1851, dependencies of the convent are devoured by WildFire, saving-is, however, the church and the remarkable sacristy (*).
In May 1855 passing the parish church of the parish of Santo António dos Groves. As of November 1974 the Franciscan friars, coming from Italy, take this set currently treating it with great care.
What is now the church of Santo António dos Groves
The church of Saint Anthony of Groves belongs to the type of high shrines, called sacred mountain (read on a site sacred hills here in Europe). It has a monumental staircase built in the eighteenth century and adapted to the natural slope of the hill. It consists of thirty stone steps divided into six sections and flanked by six meshed chapels are observed naive compositions of sculpture, earthen, figuring scenes from the Passion of Christ.
Almost everything you see today was made in the eighteenth century, as the stairway, the church and some outbuildings. From medieval times there is only the arch of the door, dating from the fifteenth century and archaeological remains.
A fachada is simplória, with a large bow to precede the Gothic portico, with a big window, and two niches ladeá it, with the figures of Saint Anthony and Saint Francis.
The interior of the church of Santo António dos Groves
The interior of the church is simple, one with nature and with the head formed by a single chapel.
The church is beautiful and has some artistic value perhaps shaped blue tiles in the first half of the eighteenth century with several allusive scenes life of Saint Anthony which are worth to be seen, the most interesting scenes than the aesthetic quality; have the right preaching to fish, the miracle of cut foot, meeting with S. Francisco and the death of St. Anthony; the left side the preaching of St. Anthony sitting in walnut; St. Anthony freeing his father from the gallows; taken of the Franciscan habit and the miracle of the Eucharist. Also has three altarpieces of Ioannina season. On the main altar is a large canvas representing Our Lady of the Conception, dated 1779 Pascoal and painted by Parente. In the other two altarpieces are two images of S. Francisco e S. John the Baptist.

Rating: The church of Santo António dos Groves is classified as a Public Interest