A House of the Tower no Gouveia municipality was built in the sixteenth century and was part of a solar, however that was being dismantled. Its highlight a remarkable Manueline window detached.
The lot belonged to the first Earl of Gouveia, after Marquis, title granted by Philip III of Portugal. The last of the Marquis of Gouveia, Duke of Aveiro- Don José de Mascarenhas, was tried and executed with his family, by the Marquis of Pombal in 1759, Following in the process of calling Távoras. Thereafter was successively occupied by families and individuals in the early twentieth century was the first headquarters of the Football Club's Gouvenses, now defunct guild. In 1928 the building was classified as a National Monument and underwent major refurbishment. It was again restored in the early twenty-first century. Today is a delegation of the Serra da Estrela Natural Park.
Description of the Building of the Tower
Is irregular rectangular plan with three floors, in granite ashlar with many stones sigladas the same bed. The main façade faces west stands a polilobada Manueline window, with the inscription in Gothic characters "Ave Maria Gratia", overlying a lintel with a rabbit and canine separated by sheets, is an insured under the counter for three anthropomorphic frowns.
In the north façade, the first floor, have two doors; one in regular staves with beveled edges and bow in perfect round and another Gothic. At the top are two beautiful Manueline windows; one has Gothic characters, IHS e XPS, which means Jesus Christ and fleurs-de-lis. The other is of the same type, but prettier, with a lintel decorated with, 6 quadrofóilios, 2 fleurs-de-lis a turtle and a fish- the first is a symbol of the cosmos and the second with Christian meaning. This flank was addorsed a building, he too old. The facade was only exposed from 1952, date on which it conducted its redevelopment. The interior has three floors with some corbels with plant motifs and a armillary sphere. 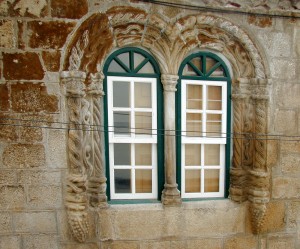 The remarkable Manueline window of the house in the Tower Gouveia
But the big surprise is however reserved in your back, Right on narrow street. Above three lines of ports, two with bevelled edges, one with religious symbolic marks with crosses, There is a monumental Manueline window detached with three Archivolts, all different, with beautiful designs and fine stranded stranded, ending the first archivolt an inverted cone embellished with balls and spiral lists.
I Manueline symbols
The name corresponds to the artistic style, which was developed from 1480, in the reign of John II until the onset of expression in the Renaissance time Dom João III, near 1540. The name is a neologism coined in the nineteenth century to designate the buildings in the reign of Dom Manuel I, to reveal a unity of style. Has great symbolic and heraldic collections- ubiquitous armillary sphere, the theme of the rope, ornamental condensation in vain (doors and windows) and drawing hipernaturalismo. Manuelino is present in the idea of ​​conducting, through the Portuguese empire (Don Manuel as the new Caesar, new or novel David Solomon), a world evangelized, Catholic, perfect and heavenly (later the idea would be adopted, and Portugal was already in decline, the myth of the Fifth Empire)- in other words (re)founding a new Order.
The pine cone and rope
In the house of the Tower Manueline window at the base of the strings, found a pine cone or "cob". The tree is from the prehistory, in almost all religions a symbol of immortality because of the perseverance of the sheet and the incorruptibility of resin. The cone is often in the hands of Dionysius, like a scepter expressing the consistency of vegetative life (eternity) and the elevation of God over nature. Manueline art in the cone emerges as a symbol of the life force, persistently and eternal, linked to God, essential to target the eternal earthly paradise which the King wished Fortunate. The cones also symbolize everlasting love to God Christian, humanly embodied in Christ. The rope is tied, generally, the symbolism of ascent and union; this case the Humanity to ascend to the Divine Grace which reaches perpetuity; this is perhaps the most powerful desire that emanates from our mind- collective and individual, from the Paleolithic -, and is the creative source of art, and one of the five leading causes of religiosity (beyond eternity, we have the explanation of the world, the sense of intellectual superiority in the biosphere, the need for ethics and relief / elimination of suffering). The Paradise ascent must be made with spirit – here symbolized by the fruits of the middle column. 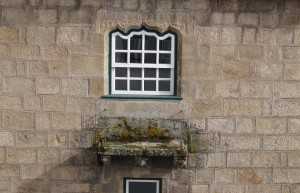 The window is, thus, the human, through the spirit and its connection to Christ, can aspire to a life beyond the grave Edenic.
The Manueline pillory and the source
Near the Tower House is the Manueline pillory reconstituted in 1951 after you found some pieces scattered in various locations. Look-up near the base of a set of five overlapping rings, decorated in the first half and the last ball with elegant twisted; the helm is very worn decorated with vegetal motifs and anthropomorphic.
Behind, with a romantic touch, is the source Seat, Baroque style with shell-, volutes and four tile panels of artistic median Widow Lamego Factory signed by the author. In a small box is the Head of the Black Golden rocks (***) next to him a scene of St. Anthony with naive miracle of the cruse.
St. Anthony and the miracle of Bilhan

Legend has it that a young man was on his way from a source with a pitcher to fetch water, but left it near the source; such is the sadness of what happened to the young began to cry. Right now it appears that St. Anthony, to see her so shaken, asked the reason of so much distress. She explained to him what had happened and the holy, by milagre, consertou a bilha. Not a miracle of major consequence, but is moving; and sometimes it takes so little to do someone feel good, but the opposite is also true.
Another painting is a scene of pastoral, that abound sheep, the shepherd and the dog Serra da Estrela, straddling over a path unpaved, near the Old Head, and which corresponds to current national estrada 232 (**). A few tens of meters in Right Street we encounter another wonder of Gouveia- the Museum of Modern Art Abel Manta (*).
Note: Here is my interpretation, what is a good example of symbolic art Manueline. What is your?
Post dedicated to my colleague and friend Mário César Figueiredo and families can rest delongar with as few "Tower House. It was a remarkable coincidence!
Boa Viagem!

Belmonte, Regions of Portugal, All articles
14 November of 20109 the September the 2011